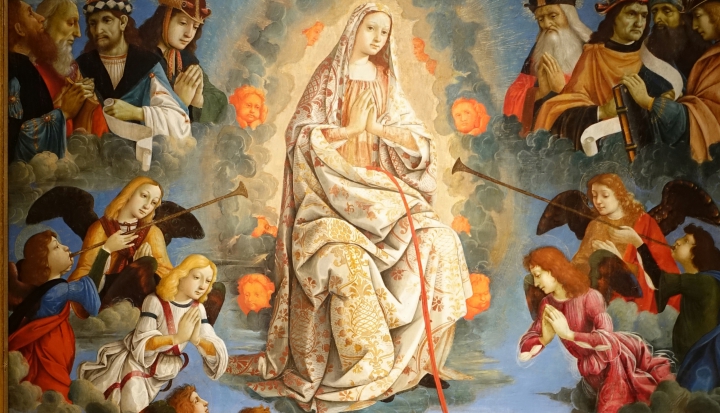 Assumption celebrations in the Catholic Church are a blend of the very old and the relatively new. Written stories about what transpired at the end of Mary’s life date to the third or fourth century, though Pope Pius XII didn’t proclaim the dogma of the Assumption, or the teaching Mary was assumed into heaven body and soul, until 1950. The intervening 15 centuries reveal evolving beliefs about Mary’s life and death.

All stories regarding the Assumption contain one consistent belief: As mother of God, Mary was no ordinary person, and as such her body was not left on earth to decay.

One of the earliest Assumption traditions states that Mary died and was buried in Jerusalem with all the apostles present. Or almost all. Thomas, who famously missed Jesus’ first appearance after the resurrection, missed Mary’s death as well. This prompted him to open Mary’s tomb, where Thomas found clothes, but no body.

Evidence suggests that by the mid-fifth century, the Christian community in Jerusalem annually commemorated the death and assumption of the Virgin. Around 600, the Byzantine emperor Maurice mandated that bishops under his rule add the Assumption to the liturgical calendar. Celebrations of the feast spread from Asia Minor to Europe soon after that.

Celebrating the Assumption on August 15 was likely an attempt by Christian leaders to boot an older pagan holiday from the calendar. The Feriae Augusti were a mid-August celebration the Emperor Augustus organized to commemorate his victory over Mark Antony. According to tradition, people marked the holidays by resting their oxen, mules, and other beasts of burden and decorating the animals with flowers. Some of this may have been comedic: flowers on a donkey! It may have also been practical; August was often the hottest time of year, and the holiday gave animals and workers a much-needed break.

When the focus of the holiday shifted from Augustus to Mary, some older customs remained. In Siena, Italy, horses do have to do a little work for the Assumption by participating in a city-wide horse race. They are also decorated with flowers, attend a Mass in their honor, and are treated to a public feast.

Elsewhere in Europe, the Assumption became an occasion for plays and processions. Villages in Northern France held funeral processions for Mary, carrying a Marian image through town in a coffin, before raising it to heaven on a large scaffold. During the Renaissance, actors in Assumption plays were hoisted heavenward using a system of ropes and pulleys hidden behind elaborated scenery. In Orthodox Christian churches, celebrations tend to be more solemn. August 1 marks the beginning the Lent of the Dormition, a two-week period of prayer and fasting leading up to the August 15 feast.

The array of Assumption traditions may mirror an ambiguity in church teaching about the Assumption itself. While Pius XII stated definitively “that the Immaculate Mother of God, the ever Virgin Mary, having completed the course of her earthly life, was assumed body and soul into heavenly glory,” the church purposely left open the question of whether Mary died before she was assumed into heaven. Consequently, some celebrations place heavy emphasis on Mary’s death and burial, while others highlight her assumption and ultimately her coronation as queen of heaven.