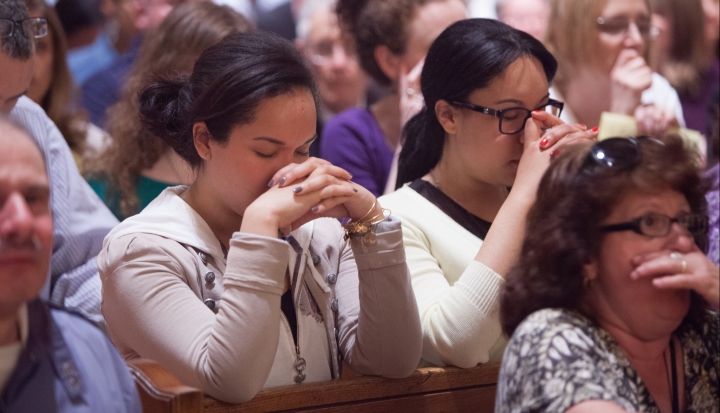 I have a terrible habit of laughing at the way my Hispanic relatives talk—classic Spanglish. They mistake and from y, the from el and la, and they don’t know what a quiet volume is. My own mother can’t even pronounce my Persian name right; she, my abuelita, my aunts, and my uncles all call me “Cheereena,” not Shireen.

But not everyone thinks broken English is funny. Over the last few months, there have been reported cases of white, non-Hispanic, natural-born U.S. citizens harassing Hispanics for the crime of being themselves—Hispanic. Fortunately, no one has harassed anyone in my family for speaking Spanish or broken English yet, though they may be luckier than others because they live in an area with a large Hispanic population. These days, however, I cannot help but worry about their safety every time I see someone staring at them while they talk in public.

The one place where my family can be themselves, without worrying about what they sound like to others, is at Mass. The Catholic Church was my family’s biggest source of comfort when they moved to the United States more than 40 years ago. It also helped them learn English: while they initially attended Spanish Mass, they shortly started going to Mass in English. My relatives realized that no matter where in the world someone is, or what language Mass is in, the order and prayers are the same. They could translate the English prayers into Spanish, and they eventually began to understand the priest’s homilies and daily readings in English on their own.

The support of the Catholic Church went far beyond learning a new language. Once my family became parishioners of a local church, the priest and church volunteers gave them information on where to take English and citizenship classes. Without the support of a local church, they, and many like them, would not even have known where to look for these resources, much less how to find classes that fit around their work or family duties.

My family’s church was not unique, but merely living out the Catholic Church’s mission to welcome immigrants. Catholic social teaching tells us to reject ethnocentricity, nativism, and xenophobia. In the 2001 pastoral statement, “Welcoming the Stranger Among Us: Unity in Diversity,” the U.S. bishops explain that “new immigrants call most of us back to our ancestral heritage as descendants of immigrants and to our baptismal heritage as members of the body of Christ.” The document goes on to cite 1 Corinthians 12:13: “For in one Spirit we were all baptized into one body, whether Jews or Greeks, slaves or free persons, and we are all given to drink of one Spirit.”

The document emphasizes the kind of action my family’s church took in welcoming them to the United States, saying, “Simple, grace-filled kindness and concern on the part of all parishioners to newcomers are the first steps.” Welcoming immigrants, in other words, is not about teaching them perfect English, but rather in providing them with a support network and the tools they need to make a life in this new country.

Such a mindset stands in harsh contrast to the frequent anti-immigrant sentiment outside church walls. In a video that surfaced on May 15, Aaron Schlossberg, a New York-based attorney, angrily yells at employees and customers of a Manhattan restaurant for speaking in Spanish, telling one employee, “Your staff is speaking Spanish to customers when they should be speaking English . . . This is America.” He goes on to assume that all of the Spanish speakers in the café are undocumented and threatens to contact U.S. Immigration and Custom Enforcement officials “to have each one of them kicked out of my country.”

This is a far cry from the Catholic insistence that the world is enriched by cultural and linguistic diversity. Or Pope John Paul II’s words at the 1985 Address for World Migrants’ Day: “The immigrant members of the Church, while freely exercising their rights and duties and being in full ecclesial communion in the particular churches . . . must be able to remain completely themselves as far as language, culture, liturgy and spirituality, and particular traditions are concerned.”

When my family struggles to communicate with a restaurant server in English or mispronounces my name, it’s not because they are lazy or haven’t tried to improve their English speaking skills. Rather, it’s because for them and other immigrants learning a new language is not for pleasure, but for survival. Like any immigrant who strives to fulfill the American Dream, my family had to prioritize earning enough money to comfortably take care of each other rather than mastering a vanity skill like speaking impeccable English. And when they did need to learn English, they worked as hard as they could to be able to get by in this new and foreign country.

As a first-generation U.S.-born citizen, I’m quite privileged because both of my parents have degrees from well-known universities and could give their children more resources to succeed than many immigrants. My mother may not be able to pronounce her own children’s names right, but she was pursuing a Ph.D. when she became pregnant with me and chose to discontinue academia to care for me full-time.

But what my parents’ academic diplomas don’t show are the countless additional hours learning English spent alongside mandatory course requirements for graduation. While many of their classmates enjoyed socializing during the school week, my parents had to practice perfecting their English speaking, writing, reading and listening skills to the best of their abilities in order to pass their courses.

At least my mother could look forward to being herself at Mass every Sunday, where she knew her church family would never judge her for being from a different country or speaking imperfect English. All that mattered back then, and still does today, is parishioners joining as one church to worship and celebrate the Eucharist.

Whether we pray in English or another language, even a hybrid one, God understands us.

Image: Flickr cc via the Roman Catholic Archdiocese of Boston 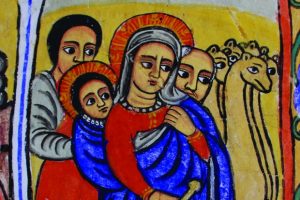 The Christmas story, for grown-ups 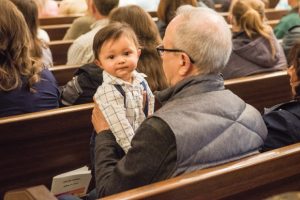 To find the holy, minister across generations