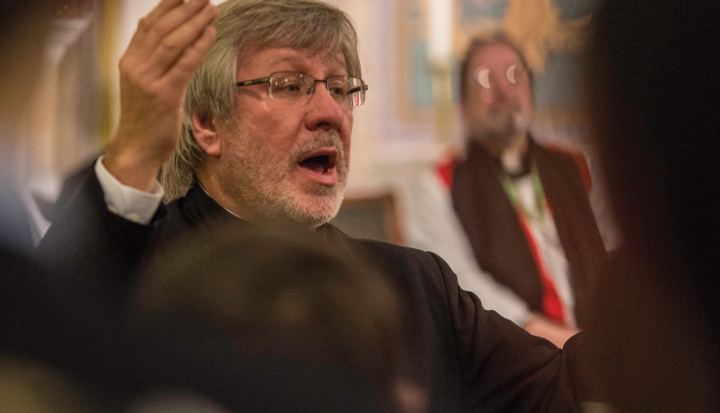 One of my core childhood memories is of singing at Mass. It’s neither a sappy nor a prayerful story, however. This was one of my rare moments of rebellion. While the rest of the congregation stood and sang together the opening hymn at Mass, I was lying down, sprawled out in the pew, singing my own made-up lyrics that went something like, “I don’t want to be here! I’d rather be watching cartoons!” My mother rightfully glared at me, urging me to stand up and behave.

Though my love for music as an expression of my emotions was clear, I couldn’t even imagine the central part that music plays in my spiritual life today. Active participation was nowhere in my vocabulary, though it was certainly modeled well in the pews surrounding me.

My attendance at Mass looks very different today. Most of the time, I am an attentive, participatory member of the congregation: I respond prayerfully and raise my voice in song joyfully. Some weeks I am tasked with the liturgical role of cantoring—leading the assembly in song. Before the liturgy I take on extensive musical and prayerful preparation with the tunes and texts of the hymns and responsorial psalm.

Like interpreting poetry, hymn texts usually express a deeper meaning both theologically and lyrically, and the element of singing this meaning to life goes even a step beyond simply speaking the words aloud.

In the liturgy itself, I am far from that little girl lying in the pew. After the first reading, I stand up straight behind the ambo, feet planted firmly on the floor of the chapel, and confidently cry out the words of Psalm 40: “Here I am, I come to do your will.” I make eye contact and smile at the faces in the assembly, inviting them to respond prayerfully with this refrain.

Through the text of this psalm, our community commits to responding like the Old Testament figure of Samuel to the call of God in our lives. I know I am doing God’s will when I use my gifts of music and hospitality to empower the congregation’s voice in telling these ancient stories. Proclaiming this psalm encourages me, as the cantor, to consider how my community, these people of God, respond to diverse callings in their own lives.

We have expressed our human condition and relationship with God through song since the beginning of Judaism. Temple worship was inherently lyrical, if not “musical” in the way that we understand it today. The act of communal song has many scriptural roots, from Jesus’ own use of the psalms (such as Mark 14:26) to Paul’s instructing the Ephesians to address one another with “psalms and hymns and spiritual songs, singing and playing to the Lord in your hearts, giving thanks always and for everything in the name of our Lord Jesus Christ to God the Father” (5:19–20).

Singing is a deeply personal, innate way of calling out to God from the deep, reaching for higher things. In one of his Sermons, St. Augustine says that “singing is for the one who loves”—music is a sign of both God’s love and the mutual love that we have for God. As a woman in the church, I find hope and strength knowing that I raise my voice with the voices of many women of faith who have gone before me; I am moved by the Holy Spirit, and I cry out with the canticles of Miriam, Deborah, and Mary in my heart.

The ministry of the cantor has evident roots in Jewish and early Christian worship, as the centrality of singing the psalms inspired Christian prayer. As the place of music in Christian liturgy broadened, the need for trained song leaders became more dire. In the Latin Mass, small choirs called scholas took on the task of chanting the ordinaries of the Mass, including the Gloria, Sanctus, and Agnus Dei.

However, the Second Vatican Council marked the return to congregational singing and the role of cantors as song leaders, not merely solo singers. The Council also instituted the Responsorial Psalm as an additional reading in the Mass in which the cantor generally proclaims the verses “in a way that illumines the hearts of the people and draws them deeper into the mystery of God’s Word” (Guide for Cantors, Second Edition, LTP). This is a big responsibility, and one that requires specific gifts, formation, and intentional preparation.

As a church, we believe that music does what words alone cannot accomplish. Serving as a cantor or singing in your church choir are excellent ways to use musical gifts in ways that enrich both communal worship and personal devotion. However, Kathleen Harmon writes eloquently in The Ministry of Music (Liturgical Press), “The most important ministers of music are the members of the assembly for it is they who, as Body of Christ, enact the rite.” That’s right: Everyone is a minister of music, and the people in the pews are essential! In this, Harmon captures the primacy of congregational song and the servant role of the cantor. The cantor, choir, and music leader serve to enliven worship as they encourage the assembly’s gifts to shine forth. We are tasked with humbly drawing others toward God as we move ourselves out of the way.

As members of the assembly, and therefore music ministers, everyone can enter into prayer through song. Like other liturgical ministers, we are vessels for the Word of God. Most cantors or choir members pray with the weekly Scripture readings, especially the psalm, and sometimes with hymn texts. Others in the congregation can benefit, too, from this practice, and it can help as a way of faith sharing and community building.

Some parishes host intergenerational gatherings of all lectors and cantors on a weekly basis to pray Scripture and communally share the meaning they find from the text, along with what this means for their faith. Music teams or committees often meet to work through a similar method of praying the Sunday readings, and then discerning together what music is right for the community’s needs. Praying in the style of lectio divina and inviting God to place one word on your heart that is in the Scripture or songs, is one simple way of individually or communally preparing for liturgical leadership.

Music as a spiritual practice helps us tell our Christian story anew. Singing presents a healthy venue in which we proclaim what is deeply on our hearts—experiences and feelings that are powerfully human—which date back to ancient times, and were surely expressed by Jesus and his disciples. The practice of singing, whether as cantor or choir member, priest or deacon, neighbor, parent, or rebellious child, enables the Body of Christ to lift its praise to God with unity of breath and voice through diverse musical styles. Through hymns old and new, the voice of the assembly weaves its way through familiar tunes that express everything from despair, longing, hope, and joy to the Lord.

Jena Thurow-Mountin is a master of divinity candidate at Saint John’s School of Theology and Seminary in Collegeville, Minnesota. She currently serves as director of social outreach for Saint John’s University Campus Ministry.