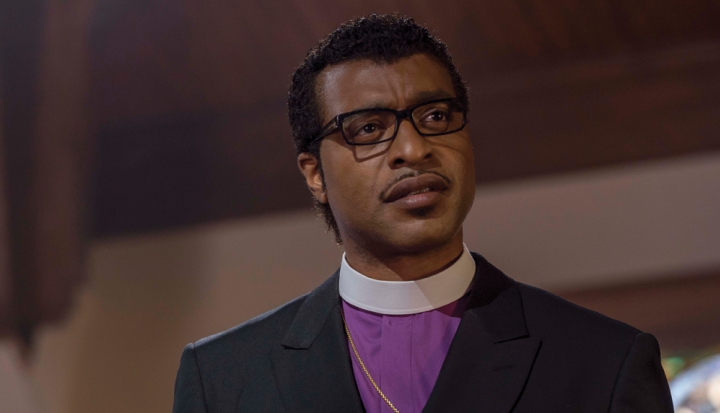 In the past 25 years or so, nondenominational evangelical Protestantism seems to have become the state religion of the American suburbs, and in many of those churches every pastor is a pope. They face no educational requirement, and their only accountability comes when the offering basket is passed. If it is full enough then grace abounds. If a preacher rubs congregants the wrong way, abuses their trust, or just tells them things they don’t want to hear, they leave.

So what happens when one of those pastors becomes a prophet? What if he sincerely hears a message from God that challenges the certainties of his flock? That’s the story told in the new Netflix original movie Come Sunday, a drama based on real-life people and events. And, among other things, this movie actually made me grateful to belong to a church that has an authoritative magisterium to interpret Scripture in the light of reason and tradition.

Carlton Pearson, the main character in Come Sunday, played by Chiwetel Ejiofor (Solomon Northrup in 12 Years a Slave), was an African American megachurch superstar. Licensed to preach at age 15, he ended up at Oral Roberts University (ORU) and became a personal protégé of the school’s televangelist founder. Shortly after graduating ORU he stayed in Tulsa and started Higher Dimensions Church, a racially integrated and (of course) nondenominational fellowship that quickly grew to 5,000 members. His preaching and singing made him a national figure in the evangelical world. He went all over the country proclaiming the urgency of a born-again Christian experience.

Then his 70-year-old uncle, who never came to Jesus, hanged himself in his prison cell. Not long thereafter, Pearson was up in the middle of the night, rocking his infant daughter, when he saw a cable news report about genocide, war, and starvation in central Africa. In the movie, as images of African corpses fill the TV screen, Pearson’s eyes fill with tears. He sits up late into the night, weeping, poring over his Bible, and praying.

In the next scene we see Pearson in front of his coliseum-sized congregation telling what happened that night. He hadn’t wept because innocent people were dying cruel and needless deaths. He wept because those people were going to the eternal torment of hell.

During that long night, Pearson says, God told him that all humanity was already saved and would be welcomed into His presence. This news is met by widespread grumbling and confusion among the congregation and outright anger from the Higher Dimensions staff. Pearson spends the next week cloistered in a local motel with his Bible, fasting and praying. Oral Roberts himself (played by Martin Sheen) even shows up to tell Pearson that he needs to meditate on Romans 10:9, which says that to be saved you must “confess with your mouth the Lord Jesus.” Roberts promises to be at Pearson’s church the next Sunday to hear him recant.

When Sunday comes Pearson takes the stage and, with Roberts looking on, grasps awkwardly for words. He searches in his Bible for Romans 10:9 and seems about to launch into his recantation, but instead he turns to 1 John 2:2: “ . . . Jesus Christ . . . is the atoning sacrifice for our sins, and not only for ours but also for the sins of the whole world.”

As Pearson mounts a defense of his newfound universalism, members of the congregation, including Roberts, start walking out. During the next week four white ministers on Pearson’s staff come tell him they are leaving to start their own church. Finally, Pearson is summoned before a panel of African American Pentecostal bishops and declared a heretic.

At the end we see Pearson moving into his life’s second act, giving a guest sermon at a California church led by an African American lesbian minister, and on-screen text tells us that he still lives in Tulsa and ministers at All Souls Unitarian Church.

Most audiences are probably taking Come Sunday as the tale of a brave, independent spirit crushed by narrow-minded fundamentalists. But the greater tragedy here is that Pearson’s religious tradition gave him so few tools for making sense of his faith.

Pearson’s initial insight about God’s mercy seems good and true enough. However, as he rushed from that insight straight to the mushy position that there is no hell and everyone is saved, no matter what, I found myself pleading with him, “Read the Catholics; read the Catholics!” But, of course, he never did.

If he had he would have found a body of teaching that answers his questions without ditching orthodox Christian belief. Hell is eternal separation from God, and it has to exist because if humans have free will they must also be free to reject God. Is anyone in hell? Is everyone saved? Only God knows, but the church does teach us that everyone who is saved, “Christian” or not, is saved by Christ because Christ is somehow present to all people, at all times, in all their varied circumstances.

The religious tradition Carlton Pearson came from (and the one in which I was raised) is the one Flannery O’Connor satirized as “the church of Christ without Christ.” Instead of the real presence of Christ in the Eucharist and the apostolic succession, these Christians have only their Bible, a book that, on its face, says apparently contradictory things about lots of important matters.

To have a faith that makes sense, the authority to interpret that book simply has to rest on something other than the ability to draw the biggest crowd and the fullest collection basket.

Image: Courtesy of Netflix
TagsCulture in Context TV and film