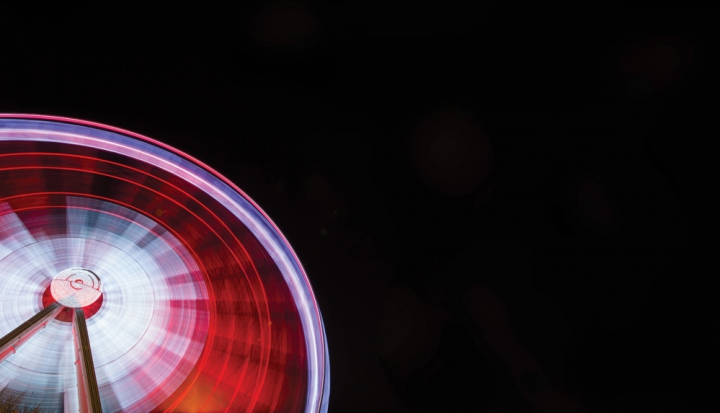 My church welcomed new parishioners last week, and as we sat around a conference table eating strawberries and celery sticks, our priest passed around the liturgical calendar, explaining that here, time works differently.

We passed a framed image of the colored wheel of time that circles endlessly through the Christian story: Advent, Christmas, Epiphany, Lent, Easter, Pentecost, and that stretch of green we call Ordinary Time. Secular time is a straight line, stretching out ahead indefinitely, though physicists like Stephen Hawking have taught us time may not be like that at all. Hawking was an atheist, but looking at the colored circle I thought he and the church are not really so far apart on this one.

Time is one of the reasons I come to church, to escape what feels, at least, like the endless forward march of chronos. When we can only go forward, we leave so much behind.

I imagine the Mass as a time travel adventure, a chance to enter the wheel, the story, somewhere else. We are not just playacting the Last Supper, we are entering the enduring moment of Christ’s sacrifice. When we receive the Eucharist, we are not only receiving Christ but also all of the time he has gathered to himself. Christ is beyond time, and for a moment, so am I.

But my obsession with stories of time travel is not rooted in physics or even in faith but in grief. When my mother died when I was 14, it was almost as if I’d jumped tracks to an alternate plane, one where I was an orphan. In a life that no longer felt like my own, I spent hours on my belly watching movies like Somewhere in Time with Christopher Reeve and Peggy Sue Got Married on HBO. This was the closest I got to grief counseling. I didn’t have the language for it then, but now I know they helped me to imagine a way back to my mother, to safely engage the fantasy of seeing her again, alive and healthy, in my lifetime.

We don’t fantasize about heavenly reunions when someone we love dies. We don’t project ahead. We want to rewind, to return them to us. When Peggy Sue Kelcher goes back in time, she comes home from high school to her mother’s kitchen on an ordinary afternoon. The scene still grips my heart. She enters the sunlit rooms of her childhood again and finds her mother on the phone with her grandmother. Maybe that’s a vision of heaven after all.

“I wanted to scream, ‘Return to me my mother the day she was born. Give her another beginning and not an ending,’ ” Edwidge Danticat writes in her book The Art of Death.

These are miniature time travel fantasies too, motivated by grief.

Time travel stories also play on our regrets, our longing to undo the wrongs we’ve done, to set things right. (One famous time travel quandary is “Would you kill the infant Hitler?”) But in the more recent film Arrival, a woman learns to speak a language of timelessness that helps her to, in essence, remember her own future. The movie asks a similar question to Peggy Sue Got Married: If you knew the outcome of your choices, would you do things differently? Would you marry the man who you know will break your heart? Would you give birth to the child who you know will die young? Arrival was striking in that it projected forward rather than backward, but at its heart it is the same old story—and it’s as compelling as ever. Given the chance to escape time, to alter our narratives and spare ourselves and others pain, would we take it?

When Hawking died earlier this year, I’d been spending the last of the long late-winter’s nights watching the first season of Dark, a German sci-fi series currently streaming on Netflix. When I heard of the physicist’s death, I went in search of my copy of A Brief History of Time, hoping to find a reference to the Bootstrap Paradox, in which an object or person that ping-pongs through time has no discernable origin, a chicken or the egg dilemma that’s at the heart of Dark. But after flipping through Hawking’s book again I realized I was really looking for something else: I was looking for my mother.

Both quantum physics and Catholicism give me hope that I am still connected to her, that her story and my story, ping-ponging through time, will each, somehow, continue to shape the other, the future wrapping around to touch the past like the colored wheel of time we passed in the church conference room.

When I receive the Eucharist from the hands of my priest, I can imagine, for a beat, that I am holding Christ, who brings with him no less than everything, past, present, and future; every moment, every memory, of every soul who ever lived; the births and deaths and everything in between of every body beloved or hated or forgotten, from the first tick of the clock to the last. He brings my mother too.

TagsBooks and literature Culture in Context TV and film

The whole world in our hands