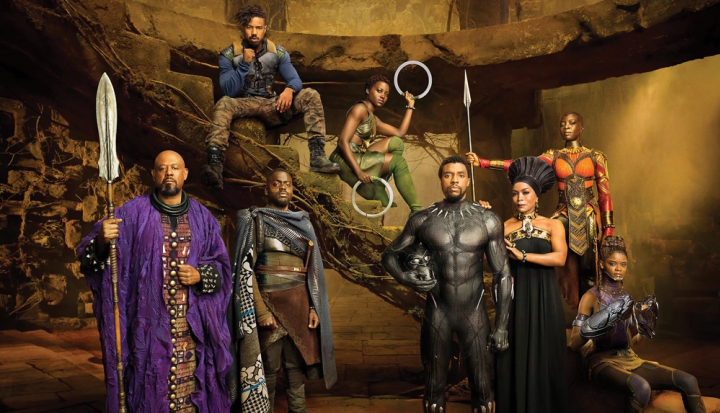 In ancient Greece, heroes were half god, half human. Comic superheroes followed that mold—unlikely people with exceptional abilities to leap tall buildings or fly invisible planes, celebrating the potential greatness hidden in mere mortals and making common folk feel as if they, too, might someday rise.

Heroes are products of specific moments in time. Captain America, which featured a World War II U.S. soldier with superpowers, hit print the year of Pearl Harbor. Director Patty Jenkins’ inspiring Wonder Woman shared the same feminist zeitgeist that spawned the #MeToo movement. And, in an era of gun violence that kills students in their classrooms and African Americans in their neighborhoods, the Black Panther arrives on the big screen.

It’s about time. We need this guy.

T’Challa is King of Wakanda, a fictional country director Ryan Coogler and cowriter Joe Robert Cole draw from the cultures and customs of actual African nations. Wakanda is rich with vibranium, a mineral with extraordinary properties that supports phenomenal technological development. Vibranium soil also fertilizes a special herb that, when ingested by T’Challa (Chadwick Boseman), gives him the superhuman speed, agility, and power of the Black Panther.

One of the delights of the film is to share Coogler and Cole’s imagining of Wakanda as an African nation free from white imperialism, its natural resources unpillaged, its peoples not stolen from its shores. Theirs is a realized dream of wholeness, of heritage intact, untarnished by invaders.

Wakanda is free to determine its own destiny. Its tribes produce innovators and warriors, many of whom are supremely capable women. Along with breaking race barriers, this film renders gender constraints moot—here women do not sit idly while men show off. Wakandan women are funny, fierce, and smart. Coogler and Cole hand female characters some of the best lines in the script.

Often, idyllic Black (and white) masculinity demands that men be unflinchingly confident with the ladies, but T’Challa is not—he freezes when the woman he loves is near, and women under his command tease him mercilessly. Yet he is king and has their respect. It’s a small crack in the patriarchy but suggests that good things are going on in Wakanda.

GoFundMe drives are bringing as many children as possible to screenings to expose them to this potent break from persistent media representations that typically link Black storylines to tales of criminality, urban distress, and poverty. Black Panther’s Wakanda is not a culture that rose out of the ashes; it is a culture that was never burned to the ground.

Heroes take care of the nonheroes, and King T’Challa faces an ideological crisis. His nemesis, Killmonger, has seen what life is like for African Americans in the United States and believes Wakanda has an obligation to help the African diaspora. T’Challa faces disturbing questions relevant to modern global politics: Is it each nation for itself, or does each owe responsibility to the others that share the planet?

Black Panther also teaches white audiences something about being a respectful ally—a person who is not a member of a marginalized group but who wishes to support it. White allyship of Black Lives Matter has been criticized as awkward and inappropriate at times, as has male allyship of #MeToo. Margins need support, but centers, used to being the loudest voices, can overwhelm and silence even when they are trying to help. When Martin Freeman as Agent Ross, a rare white face in the film, attempts to speak, Wakandan leaders shush him—and, surprise! He stays shushed. When he startles T’Challa’s brilliant scientist sister, Shuri (Letitia Wright), she tosses off one of the bring-the-house-down lines of the film: “Don’t scare me like that, colonizer!” The action blessedly moves on without Ross holding forth on how his family never owned slaves and how his best friends are Black.

Some criticize Ross as an irritatingly minor character, but Black Panther is about African culture, ability, and ideology, and white people are minor characters because they are, in fact, incidental to the story.

It’s about time for that, too.

During the months since Black Panther’s release in February, it smashed through one box office record after the other, defying conventional Hollywood thinking that white audiences wouldn’t tolerate black heroes and that films with black casts and directors couldn’t succeed commercially (despite the significant success of individual films and of the blaxsploitation genre in the 1970s). This film refutes race-based thinking in a way nearly impossible for Hollywood to ignore: It is making money. Lots and lots of money.

At the film’s conclusion, T’Challa addresses the United Nations (and the film audiences who must leave the theater to dwell in a nation that is all too divided, in reality) with pointed words: “In times of crisis the wise build bridges while the foolish build barriers.” The Black Panther wants us to act like one single tribe.

What a heroic idea.