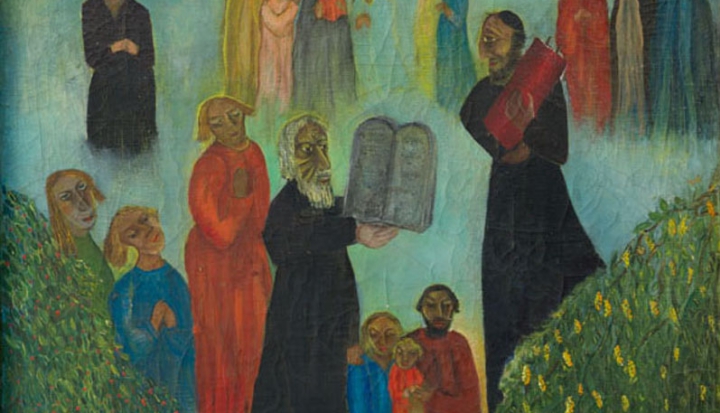 “Who’s your hero?” I asked the dozen faces in front of me. It was the first session of a new year of religious education. I like to shake up the kids with the idea that it might not be as boring as they’ve been dreading.

“John Green.” Really? An author can be a hero? If so, this could be an exciting year for me.

Twelve-year-olds are convinced that religion is about memorizing stuff: prayers, lists, rules, the right answers in unvarying patterns. I do expect my kids to remember things, but I employ sneakier catechesis. I invite them into a conversation. I invite them to be church with me. We take it from there.

But first, we have the interview. I want to know what they know or think they know so far about the God stuff: “Who’s God?” “What’s prayer?” “Are people more good than bad, or more bad than good?” “What makes you sad or angry?” “Why are you here?”

At first many of the kids supply answers they think I’m looking for. Pretty quickly some catch on that I’m really curious what they think. They start being honest, and the sincerity is privileged and revealing. They admit skepticism about things they’ve heard in church settings. They don’t suspect yet that grownups are at least as doubtful and are just hiding it better.

Eventually in the interview I get down to a question they expect: “Name the sacraments.” This year’s class recalls all seven, Holy Orders rounding out the bunch after a head-scratching pause. Then I ask: “How many commandments can you think of?”

Immediately a boy shoots up his hand: “Love one another!” My bad, of course, for not specifying the 10 commandments. But since the Golden Rule of Jesus is the most important rule to keep in mind, I’m glad it’s uppermost in their thoughts. “And of the original 10?”

Adultery comes out first—this from a tiny girl who could not possibly commit this offense or comprehend its details. Adultery is rapidly followed by killing, stealing, and lying. Another child recites the first commandment with admirable finesse. Someone remembers that our parents deserve respect. Not taking the Lord’s name in vain emerges next and, with a little prompting, “going to Mass” is reinterpreted as “keeping holy the Sabbath.”

And then the gravy train of compiled and retrieved information comes to a halt. It’s as if a herd of cows wandered onto the tracks and there’s nowhere to go but off the rails. Eight commandments are what this earnest group can recall. What else can one possibly do or fail to do that God wouldn’t like? It’s hopeless. A dozen pairs of eyes admit defeat.

Gently I remind them: “The final two commandments are in fact the last two on the list. They’re both about greed, about envy. They’re about wanting what we don’t have, what other people may have. The word we use for this craving is covet: don’t covet your neighbor’s house, spouse, or stuff. It leads to a lot of trouble when we covet. And we do this. A lot.”

In fact, coveting is among the deadliest sins in any culture, not excluding ours. The fact that grownups don’t think about it much in the roster of wrongdoing is because coveting is second nature to us.

As a priest told me once: “In 50 years of hearing American confessions, no one has ever confessed to me the sin of greed.” Instead, we call it window-shopping, mall walking, catalog perusing, or merely clicking on a pop-up ad. No harm, no foul. We’re just looking. But what we’re really doing is stoking the fire of our discontent.

I rarely hear a homily on coveting, greed, or the green eye of envy, to be comprehensive about the subject. I’m also pretty sure no parochial school teacher I had in 12 years of religion classes mentioned the topic. I can say this with conviction because for many years I pronounced the word covet with the accent on the second syllable, to rhyme with “beset.” I did so because I never heard the word spoken aloud. Not in normal conversation, surely, but not even in religious instruction.

I don’t blame the kids for not being able to retrieve these last two commandments from their data banks. Chances are there’s not much to recall. In fact, I checked my five favorite biblical resources to discover that none of them define the word or list it as a topic. I looked at multiple biblical translations to discover that “covet” is by far the most popular translation for the Hebrew hamad. Even the Jewish Bible uses it. But the more freewheeling paraphrase Bibles also translate it as desire, lust for, and “setting your heart on.” That last phrase moves us in the direction of understanding. Coveting is not simply about looking but about longing that leads to possessing.

Coveting appears in five biblical contexts. Two are the Decalogue listings, in Exodus 20 and Deuteronomy 5. The prophet Micah also speaks about coveting and taking property: Note how the taking follows the longing quite automatically (Micah 2:2). Paul is the final preacher on the topic of coveting. First, he blames the Law itself for making him aware of the urgency of the impulse. Secondly, he sums up the Law in four quick bullet points. Coveting makes the number four spot (Rom. 7:7; 13:9).

What’s evident in all of these usages is that coveting can tear apart both souls and communities. As Jesus warns us, thinking leads to doing before we’re aware we’ve crossed the line. First we eye, then we wish. Our daydreaming leads to justifying and rationalizing, then scheming and maneuvering. Before too long we make a play for the prize. Whether it’s a relationship, a car, or a company, that play may cost something we’re not prepared to pay.

So let me tell you about the dress. A few years ago it showed up on my computer screen in a sidebar ad. I barely glanced at this particular dress: not my style, not my color, not my thing at all. Despite my lack of interest, the ad persisted, greeting me every time I turned on the computer or sent an email. I didn’t want the dress, wouldn’t wear it. I thought it was rather hideous, in fact.

But after more than a year of seeing the ad many times daily, the dress began to change, if only in my mind. It became familiar, comfortable, even agreeable to the eye. One day I clicked on it—just to see how much it was selling for. The decision was no decision at all. The dress had crept closer and closer until it seemed like it belonged in my closet.

Happily, the website entry was balky and I never got in. Deus ex machina! This near escape reminds me of the power of proximity, how familiarity breeds attempt, and how rubbernecking mansions on the fancy street in town can bring us one step closer to envy or regret. Anyone who’s been unexpectedly lip-locked by a married friend, or who’s driven home an unaffordable new car after idly surveying a lot, knows the havoc coveting can wreak.

Which brings us back to the most important question I ask my class: Why are you here? The answer can never be: to acquire.