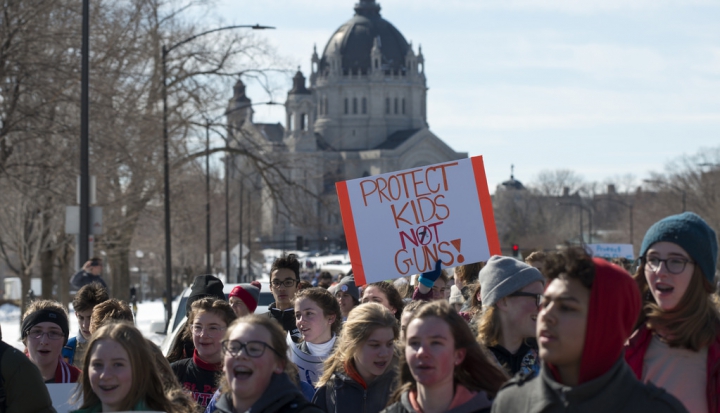 I write this when hundreds of thousands of middle and high school students across the nation joined in a March for Our Lives, an organized demonstration to demand action for effective gun reform laws. The catalyst for this event, which occurred in more than 800 cities, was a mass killing at a high school in Parkland, Florida in February—one of a tragically long list of school and mass shootings that have become commonplace in our country.

In the aftermath of that tragedy the student-survivors spearheaded a groundswell of activism that challenged the accepted consensus that nothing can be done to stem the tide of gun violence. They have ignited a new conversation on what many had considered to be a untouchable issue in view of the powerful gun lobby that holds many political leaders in its thrall.

Inspired by their passionate determination, I followed interviews these young people gave prior to the March and at the event itself.  They offered poised and profound assessments of our nation’s public life.  One student eloquently described our political system as “sick with soullessness” and urged his fellow students “to bring morality to our politics.”

A white Parkland student observed that the nation paid attention to this school shooting because of the privileged affluence of their community. Therefore they chose to “share the stage with those who have always been impacted by gun violence” but whose plight has been unrecognized.

Young men and women gave voice to the experiences of African American and Latino and Latina students who have long endured the scourge of gun violence in their communities—and whose schools have been both unsafe and underfunded.  Many described their generation as the “diverse, inclusive, and compassionate face of the nation,” and pledged that they would not allow their opponents to divide them by race, class, or geography.

The marchers’ signs carried piercing messages: “The blood of our students has become a business in this country.” “Children are braver than Congress.” “Is Congress writing laws or is it the NRA?” “We call out BS.” “Gun Sanity Now.” “Thoughts and Prayers: Blah. Blah. Blah.” “Teachers need pencils. Not guns.” “#NeverAgain.”

The message was clear: These students believe that truth and ethics matter in public life.  They reject a politics of corruption, cynicism, and fear. They are fed up with a system that favors the profits of well-heeled donors over the well-being of ordinary people.  They demand courageous public servants who serve the common good—a common good expressed by a simple question from a eight-year-old girl to her mother: “Why aren’t our schools safe?”

This activism reminds me of a childhood story, The Emperor’s New Clothes. It tells of con men who tricked a king by crafting make-believe garments which, they claimed, would appear invisible to those who were unqualified or stupid.  Because no one wanted to admit the truth, for fear of being ridiculed, all the adults went along with the pretense, even as the king paraded naked in the public square.  It wasn’t until a child, not grasping the need to pretend, declared that the king was wearing nothing that the sham was exposed and the townspeople realized their collusion with lies, hypocrisy, and deceit.

Similarly, today’s youths insistently and uncompromisingly expose the “con” that too many adults accept as reality: that nothing can be done in the face of powerful and well-funded lobbies; that politics is governed by the pursuit of power rather than a commitment to truth; that black lives matter less than white lives when they are taken by guns; and that the nation’s racial, gender and class divisions preclude us from coming together for a common purpose.  They are exposing the moral bankruptcy of our political life, and demanding a restoration of public morality, decency, and commonsense.

Perhaps the specifically Catholic challenge is best expressed by a Catholic high school student who explained: “I’m here because if we claim to be pro-life, then we have to stand against gun violence, wherever it happens.”  That’s the new evangelization.  And a challenge to Catholic adults to not leave her standing alone.