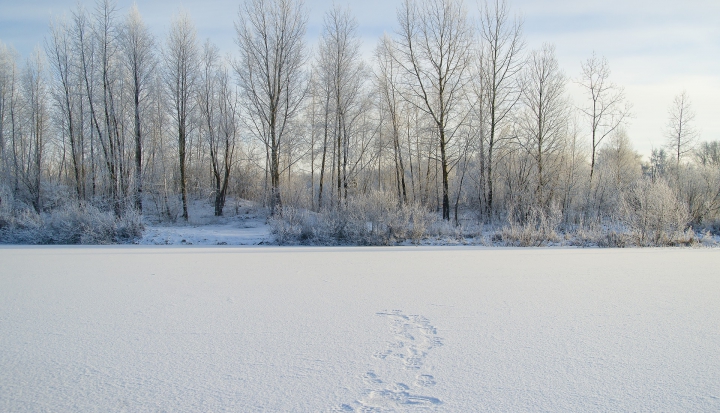 I was standing in the middle of a small frozen lake near our house, chatting with my husband and Nate, another father in our neighborhood. I was in ice skates and a down coat; Bill and Nate had on heavy boots and warm gear. The ice was about eight inches thick from a recent cold snap, and the wind was brisk from the north. As we talked, I noticed our teenage daughter walking out onto the ice in socks and sandals. From the other shore, Nate’s teenage son approached in basketball shorts and bare legs.

“What have we done wrong, Nate?” I asked, indicating our respective kids. “Sandals and shorts on the ice? All those years of bundling them up to go out in the cold, then they get dressed on their own like this?”

Nate laughed and told me he didn’t see their poor decision-making as a reflection of our parenting. “You have to look at the whole picture, not just this moment,” he said. He pointed out that my boys were in college and quite possibly on their way to gainful employment. I acknowledged that perhaps that was true, but both still routinely forgot to put dishes in the dishwasher after their late night snacks on winter break.

Nate gave other examples of our children’s successes that indicated good parenting.

“Preach it,” my husband said.

“We had a rough morning,” I said. I explained to Nate an argument we had with one of the kids and added that I wasn’t sure if Bill and I handled the situation correctly.

“Parenting is like any other job,” Nate said. “There are two types of people doing it: those who are humble, and those who are about to become humble.”

As our daughter ran around the ice in her sandals, chased by Nate’s son in his basketball shorts, I refrained from either commenting or giving direction. Eventually the cold air did my parenting for me, and both kids went inside. Teenasia came back out in hockey skates, and Xavier in long pants.

Early parenting is all about a parent’s decisions. Whether a baby is hungry or fed, wet or dry, warm or cold is within the control of the parent. Even deeper into grade school, a parent makes decisions about what children will be eating, what they’re allowed to watch on TV, how they will spend their time.

But later in middle school and in early high school, parents need to walk a tricky line between giving children enough room to make their own decisions and mistakes and providing enough guidance to prevent disaster.

The balance is complicated for families with more than one child. A friend has a daughter who, at 11, was more responsible than most 30-year-olds; that same friend’s teenage son is an eccentric genius who requires firm boundaries and limits to keep on course. My friend has to constantly weigh when it’s appropriate to rein her son in and when she is in danger of breaking his spirit. Sometimes she judges right; sometimes she’s wrong. Humbling.

I am learning that in parenting adolescents and college-age kids, one of the best ways that my humility can be manifested is through silence. If early parenthood is Advent, all about preparing children and getting them ready, my new stage of parenthood is Lent, which is not as much about preparing as it is about waiting. If my children are disciples (and I believe they are, even on their off days), there will be some waiting involved. The Acts of the Apostles come very late in the story, after much preparing and waiting.

I’m naturally a talker, and as soon as I see an issue I have an urge to point it out: Name the problem, and I’ll tell you how I think it should be solved. A more easygoing (or less talkative) mother might not have had difficulty watching her daughter on the ice in sandals and basketball socks. But for me, to see this and not call out the solution, “Honey, go inside and put on some boots,” was actually a significant challenge. Yet in my silence of no more than 15 minutes, my daughter was able to solve her own problem, which clearly was not even a problem to her, just a footwear decision.

There is wisdom in waiting for the right time—whether it’s to give advice, ask a big question, or bring up a habit that I’m hoping the child will change. I’m finding that when I lengthen the pause between a child’s behavior and my reaction to it, I give both my child and myself the gift of perspective. In the pause, I can offer a prayer to the Holy Spirit for wisdom, I can go to my husband or a friend for advice, I can give my child the opportunity to come to a solution on his or her own.

Perhaps most importantly, in the silent pause, I can have the humility to see that sometimes my most important job of parent is to be a witness and a support, rather than a judge or coach. My job as a parent now is often to watch and wait. My season of Lent. It’s humbling.