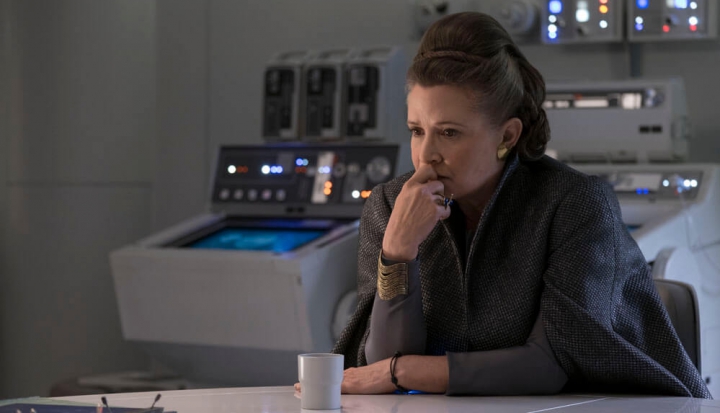 I went to see The Last Jedi with some immature trepidation, since I’m more emotionally invested in this story than I should be, not being a teenager doing crappy cosplay before I knew cosplay was a thing anymore. For me, you see, the Star Wars epic is not just a story. It’s one of “my” stories—the stories I have carried with me and that helped shape my imagination, my sense of humanity, and my understanding of our relationships to the cosmos.

It wasn’t until grad school that I found out that George Lucas had been inspired by Joseph Campbell’s The Hero With a Thousand Faces, in which the mythographer argues for an archetypal mono-myth: One story to contain them all. It all fit together then. The story was my story not just because I had fallen for it as an impressionable kid who liked to wave sticks around and dress up in cloaks. It was mine because it was made to be inhabited out of preexisting archetypes already familiar to me. The things we fear. The things we desire. Temptation. The hero’s journey.

But the hero’s journey is typically a masculine archetype. I don’t just mean simply that heroes have generally been portrayed as male. Nor even that the journey usually involves a lot of typically masculine accoutrements such as swords and spears. I mean, masculinity is written right into the concept itself. The idea that the hero must kill his father invokes all the terror of the taboo against patricide, but it’s a taboo specific to the son and is connected with themes of paternal inheritance, progenitive power, phallic power. Identity between father and son is part of this—and, in the original trilogy, this is made overt when Luke, after cutting off Vader’s head, sees his own face. At the time his lesson is “do not become your enemy!” But later he will learn the more sinister truth: Insofar as the son is an image of the father, he truly is Vader.

But what about the women?

We’re princesses to be rescued, sorceresses to be conquered, crones to give curses. We might be beneficent maternal figures, hovering on the margins. We might be objects of desire. But rarely do we get to be agents in the hero’s tale. This is not because we can’t inhabit the archetype, but because we’re so rarely allowed to do so.

It’s interesting that through the saga, Princess Leia—herself no less force-powerful than her twin brother—escapes reduction to these tropes. She’s a princess to be rescued only as a side note in her already tragic story, and as soon as she’s rescued she takes charge. Initially an object of desire for two men, this gets creepily subverted when one of the men turns out to be her own brother. When Leia is forced into a sexualized costume and position by Jabba the Hutt, she hates it. After strangling her captor with her own chains—itself a subversion of the erotic—she gets back into sensible clothing as quickly as possible.

Fans love the flirtatious banter between Han and Leia, but realistically their relationship was always doomed. It’s no surprise that in The Force Awakens the tempestuous couple is a couple no more. Han and Leia were never really a good fit. The perception of some complementary equality in their relationship was the result of a sexist idea that any man with attitude is automatically entitled to the woman in the story, even if she’s a princess and political mastermind while he’s just a smuggler out for profit. Their romance blossoms in the empty spaces between the stars, in places of danger, liminal escapes. It could never survive reality.

Many female fans grew even more attached to the character of Leia in a year that saw women standing up against powerful men who would treat us the way Jabba treated his captive. It helped that Carrie Fisher herself was a strong advocate for women’s rights, as well as for the mentally ill, so we could have a sort of double-vision appreciation for two heroes, both the princess in space and the brave, outspoken actress in our world.

And then Fisher died. So going to see The Last Jedi meant going to see not just the next stage in the story, but also a final tribute to “space mom.”

The women who don’t give up

There’s been a lot of complaint about the centrality of the female characters in The Last Jedi from more conservative corners of fandom, as though it were too much, too in-your-face, Hollywood forcing feminism on us. And while I’ll grant that The Last Jedi was in many ways a flawed film, its centering of female characters was not one of its flaws.

If the hero’s journey is primarily a masculine archetype, maybe rebellion is where the women take the lead. In the Star Wars saga, the Rebellion is initially led by a woman, Mon Mothma—who also mentors Princess Leia, who becomes General Organa and in time leads the rebellion herself.

Leia is a survivor. During her life she has seen her home planet obliterated by a galactic villain who would turn out to be her own father. She’s seen Obi Wan, her “only hope,” cut down by this same villain. After her son went over to the Dark Side, her brother fell into existential despair and disappeared to live as a hermit and her husband returned to a life of smuggling. And, finally, her son repeated the family pattern of doom by killing his own father.

Perhaps, at this point in her life, a prudent general decides that women are the ones to be trusted. Or maybe Leia has simply created a community of mentorship in which she trains reliable women on every level of the Resistance.

Watching the story unfold, seeing the faithful women who remain at their posts and who don’t give up, I couldn’t help but think of the parallels with salvation history. It’s not only in a Galaxy Far Far Away that the men flake out while the women hold firm. Think of the gospel narratives of the death of Jesus. The male disciples are driven by the great tragic passions: desire for glory, lust for revenge, fear of dishonor. But these passions drive them to betray Jesus, to deny him, and finally to flee his ignominious execution. The women stay, however. They weep, and they endure.

I don’t think either Star Wars or the gospels are trying to prove that women are somehow morally superior or even that women can’t have “hero’s journeys.” We get female villains in plenty of stories, as well as in real life, because to be a woman is to be human. The Last Jedi gives us this, too—Gwendoline Christie’s ominous Captain Phasma, who I hope will somehow be back for the next installment.

But in both stories we see that the women have earned a place at the center. In The Last Jedi, the plot gets this right. Women aren’t running things in the Resistance because Hollywood is trying to rub our faces in feminism; rather, they’re running things because it makes logical sense given the backstory and who’s in charge.

Men who object to women taking central roles in the church might want to remember what place the women took in the gospels: at the foot of the cross, present with Christ, at the moment when God himself was pierced and blood and water flowed. For us to be present at the heart of the practice of our faith is not some modern innovation. It’s not artificial or forced, but part of the story’s truth.

We look to the great myths and religious narratives to tell us where we belong and for women, too often we’re left on the margin of the story. The Last Jedi may be simply a popular film—a mediocre one, even—but it taps into the mythic structures that form our sense of ourselves. It points me towards the same assurance I find in the gospel narratives: You have a place. This is where you belong. Right here, at the heart of things.

TagsTV and film women in the church