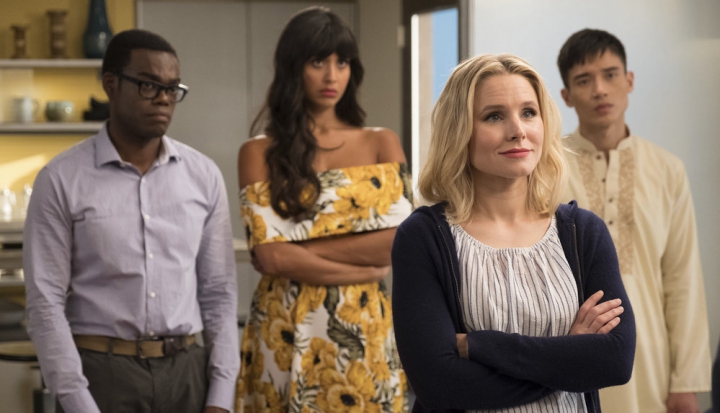 It’s one of the first questions Eleanor Shellstrop (Kristen Bell) asks after arriving in the afterlife, curious about how her new surroundings work. Her guide, an immortal being named Michael (Ted Danson), explains, “Every religion got it about 5 percent right. It’s not the heaven or hell idea you were raised on, but generally speaking, in the afterlife there’s a good place and a bad place.”

This is the premise for NBC’s The Good Place, from showrunner Michael Schur (The Office, Parks and Recreation), now halfway through its second season. What the show definitely gets right is its honest, authentic portrayal of the human experience—despite taking place entirely in an afterlife filled with endless shrimp cocktail and frozen yogurt parlors on every corner.

And although Michael assures Eleanor she’s in the good place, Eleanor knows there’s been a big mistake: she isn’t actually supposed to be there. Michael seems convinced that she was a death-row lawyer who went on humanitarian missions across the world, but in reality, Eleanor lived in Phoenix and was a salesperson peddling fake medicine to the elderly—that’s not great, or even good at all. Determined not to be thrown out of the utopia she’s landed in, Eleanor enlists the help of her assigned soulmate, Chidi Anagonye (William Jackson Harper), a former ethics professor, to teach her how to be a good person.

Admittedly out of place surrounded by human rights champions, philanthropists, and other paragons of selflessness, but not wanting to risk being sent to the bad place (joining “Mozart, Picasso, Elvis, pretty much every artist, and every U.S. president besides Lincoln”), Eleanor gets frustrated. “I might not have been a saint, but it’s not like I killed anybody,” Eleanor exclaims. “I wasn’t freaking Gandhi, but I was OK!”

This reaction feels natural and familiar. We’re all here on Earth, trying to do the best we can, perhaps hoping and believing in the promise of salvation, but who among us hasn’t had this seed of doubt creep into our thoughts at some point? I’ve made some mistakes, but I’m doing OK for the most part, right? Should I be doing more? Will this be enough in the end?

As Michael outlines in a good place orientation session, every person’s actions while alive were evaluated for how much good or bad was put into the universe. Only the cream of the crop, the best of the best, are allowed to get to the good place.

This is very different from the understanding of every life having inherent value as a creation of God, but this system makes it easy to root for Eleanor. None of us is perfect (and a lot of us probably wouldn’t be the top point-getters in this type of accounting system) but the foundation of Christianity is that we are infinitely loved by God, even if we’re not perfect. Doesn’t Eleanor deserve the chance to show she belongs?

Watching Eleanor’s motivations change from “don’t get caught” to “do what’s right” is fulfilling, despite knowing she’s the kind of person who, while alive, threw an empty coffee cup at a volunteer raising money to help the environment. It mimics the journey we are all on. Life is about making choices, acknowledging mistakes, and continuing on in hopes of doing—and being—better.

A big plot twist at the end of season one provides Chidi with another ethics pupil in season two: Michael. Chidi quickly realizes it’s impossible to teach an immortal being how to be good, as Michael doesn’t truly grasp what it means to be human. Without understanding death, it’s hard to see how his actions have consequences. Once it finally clicks, Michael experiences a full-on existential crisis. Eleanor helps him out, explaining, “All humans are aware of death so we’re all a little bit sad all the time—that’s the deal.”

But Eleanor also points out it’s the only deal we get as humans. Rather than wallowing in the knowledge that we’re all eventually going to die, we take the deal and do what we can with the time given us to be the best that we can be. Humans are flawed but ultimately have the capacity for goodness. No one is perfect, but the point is that we are trying to do better, and in doing so, become closer to God. It’s about the journey, knowing something better awaits—all-you-can-eat shrimp, a million frozen yogurt flavors, or, best of all, the promise of everlasting life with a loving God.