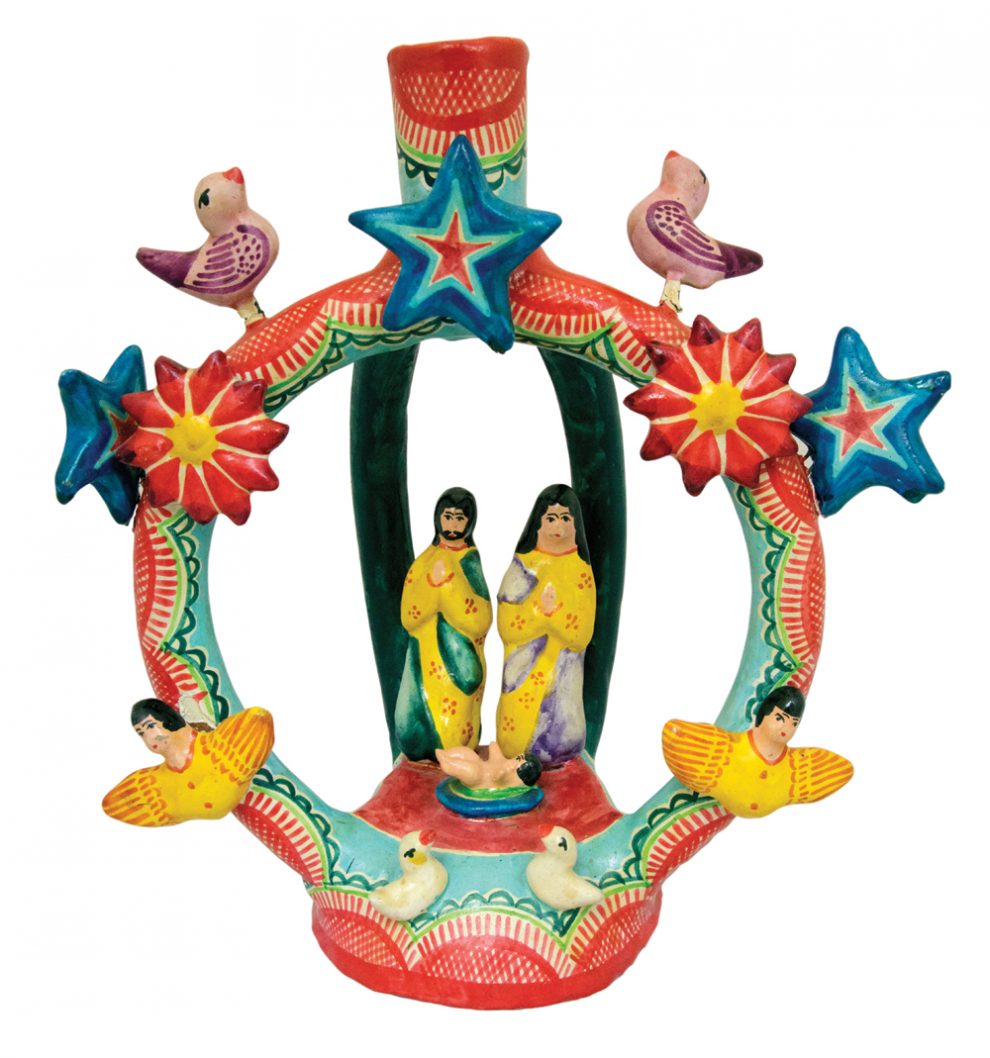 The first biography of St. Francis of Assisi, written by fellow friar Thomas of Celano, recounts an event in the Italian town of Greccio in 1223 that continues to influence the material culture of our Christmas festivities. According to Thomas, Francis wished to “enact the memory of that babe who was born in Bethlehem: to see as much as possible with my own bodily eyes the discomfort of his infant needs, how he lay in a manger, and how, with an ox and an ass standing by, he rested on hay.” Francis described his idea to a friend, a nobleman named John.

That year, in the darkness of Christmas’ first hours, the throng that assembled with “candles and torches . . . to light up that night whose shining star has enlightened every day and year” found Francis’ vision realized: His friend had brought animals to a hay-filled manger. Francis read the gospel and preached. In the stylized language of the time, Thomas records that Francis would “lick his lips whenever he use[d] the expressions ‘Jesus’ or ‘babe from Bethlehem,’ tasting the word on his happy palate and savoring the sweetness of the word.” Later a person only identified as “virtuous” had a “vision” of Francis approaching a “little child lying lifeless in the manger . . . and waken[ing] him from a deep sleep.” 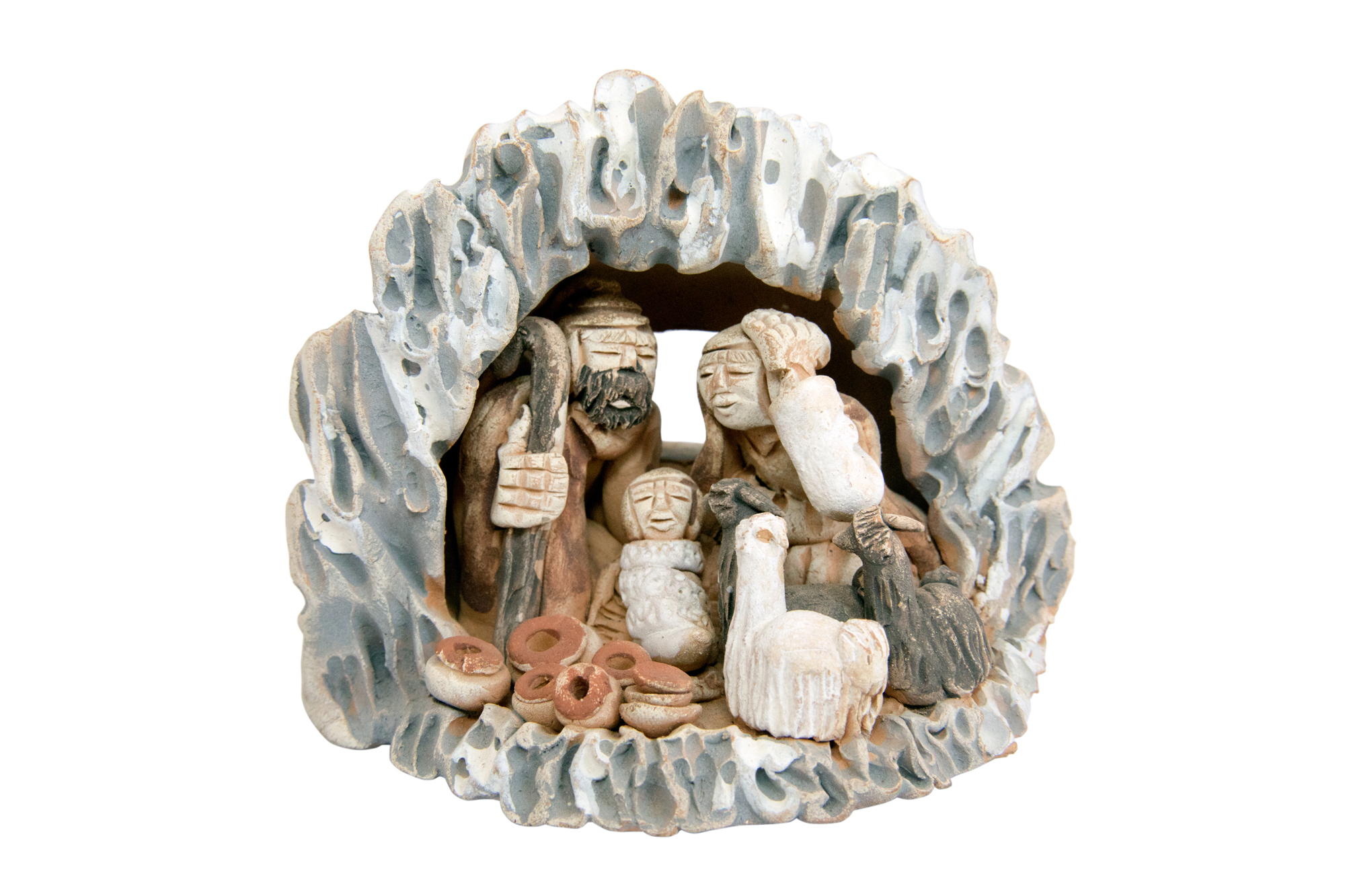 Celano’s implication is clear: Francis revived believers by recalling, not the power of Christ’s divinity, but what Celano describes as Francis’ understanding of the “humility of the Incarnation.” Contrary to the courtly manners of the time, the heavenly King set aside his nobility to become vulnerable and helpless. In his reenacting of the physical setting of the birth of Jesus, Francis sought to share his amazement at God’s manner of appearance. Francis’ imaginative insight must have moved the people of Greccio; his way of marking the nativity of the Christ child became a tradition that continues to this day. Though people still organize live Nativity scenes with people and animals, our churches and homes most often contain statuary tableaux to symbolize the miracle of the Word-made-flesh.

Claretian Father Richard Todd collected numerous representations of Jesus’ nativity. Now housed in the Claretian archives in Chicago, his assorted crèches are modestly scaled, made of common materials, and intended for domestic and personal use. These diminutive, inexpensive objects could also be packed away in a tourist’s suitcase and distributed among family and friends as travel mementos.

The tiny covered nativity scenes gathered in Guatemala were probably the latter. Rather than being housed in some version of a stable, the miniature figures are attached to and enclosed (as if for safe transport) within forms resembling a gourd and a covered dish. Both bear the country’s name, heightening the likelihood of their being a souvenir. The crudely modeled statuettes have their own charm, but the probability that these would be treasured for generations is slim. 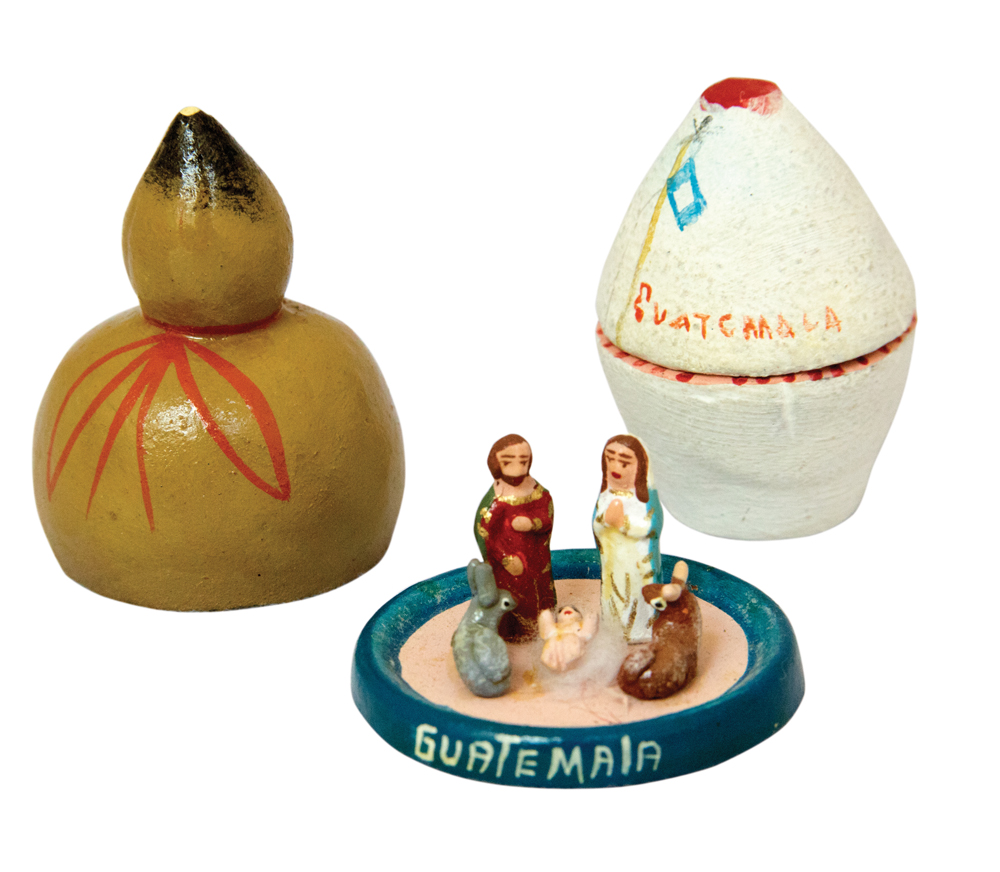 From Bolivia Todd acquired a length of bamboo that had been sliced open vertically to create six display areas for miniscule scenes from the life of Christ. Tiny hinges ensure that the stem can be closed (perhaps to protect the vignettes); a string offers a hanging option. Five tiny characters narrate the Savior’s birth in the upper left niche. By skewing the perspective, its creator made the most of the limited space and accidentally mimics some forms of modern art: The baby Jesus appears mounted on a wall beneath a bird-like star that could double as the Holy Spirit. 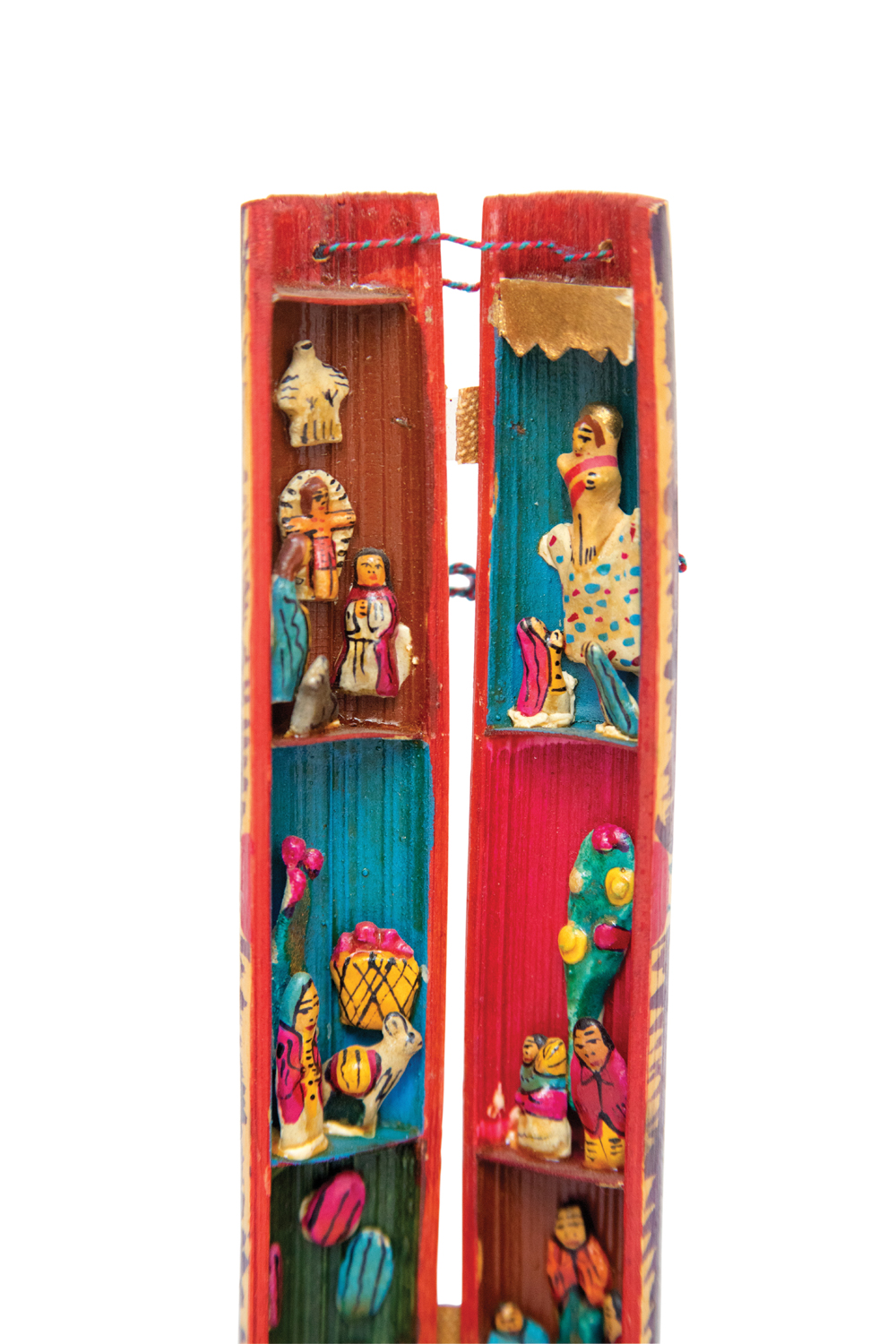 Todd’s collection, primarily crafted in Central and South America, has a distinctive feel that reminds those of us from other ethnic backgrounds how the exotic, the different, can catch our attention. When the birth of Jesus is envisioned in a particular culture, llama and alpacas replace oxen and donkeys, ceramic vessels take the place of metallic ones, and human faces become more rounded and less angular. Every local interpretation of this historical moment offers individuals the opportunity to imagine how their everyday lives, what is recognizable to them, could have and still might harbor the Holy One.

The Nativity scene most likely to look familiar to North Americans is the 11-character set from El Salvador (see the top image of this article). In the 1970s a group of artists led by Salvadoran Fernando Llort instigated a craft revival in the town of La Palma in the northern part of the country. Colorful paintings on wooden shapes used a simplified design aesthetic that was both easy to replicate and attractive to those influenced by 20th century Pop Art. Crisp execution, recognizable subject matter, and advertising that stressed artisans’ employment needs made the La Palma products popular in Christian circles.

Mexican ceramics became increasingly popular in the United States in the second half of the 20th century. Because such articles never became uniformly fashionable, they occupy a kind of gray area—in some communities, this style feels everyday; in others, alien. This unevenness of visual comprehension illustrates the multiplicities of cultures that constitute the United States and many other countries. Similarly, any physical object used in ritual or ecclesial settings might elicit cultural identification from some, while others, seeing it as foreign to their traditions, might consider it a curiosity or meaningless.

Todd’s collection includes a decorative example from Mexico, a candleholder whose base also becomes a skeletal building housing the Holy Family. Jesus, presented underdressed for anything but the warmest of weather, makes a theological statement about really being human by displaying his body. This Renaissance convention underlines both the wonder and doubt involved in believing that God became human. Mary and Joseph seem more interested in praying than attending to the infant before them; their pose betrays the artisanal history of struggling to portray the infant Jesus as “like us in all things but sin.” 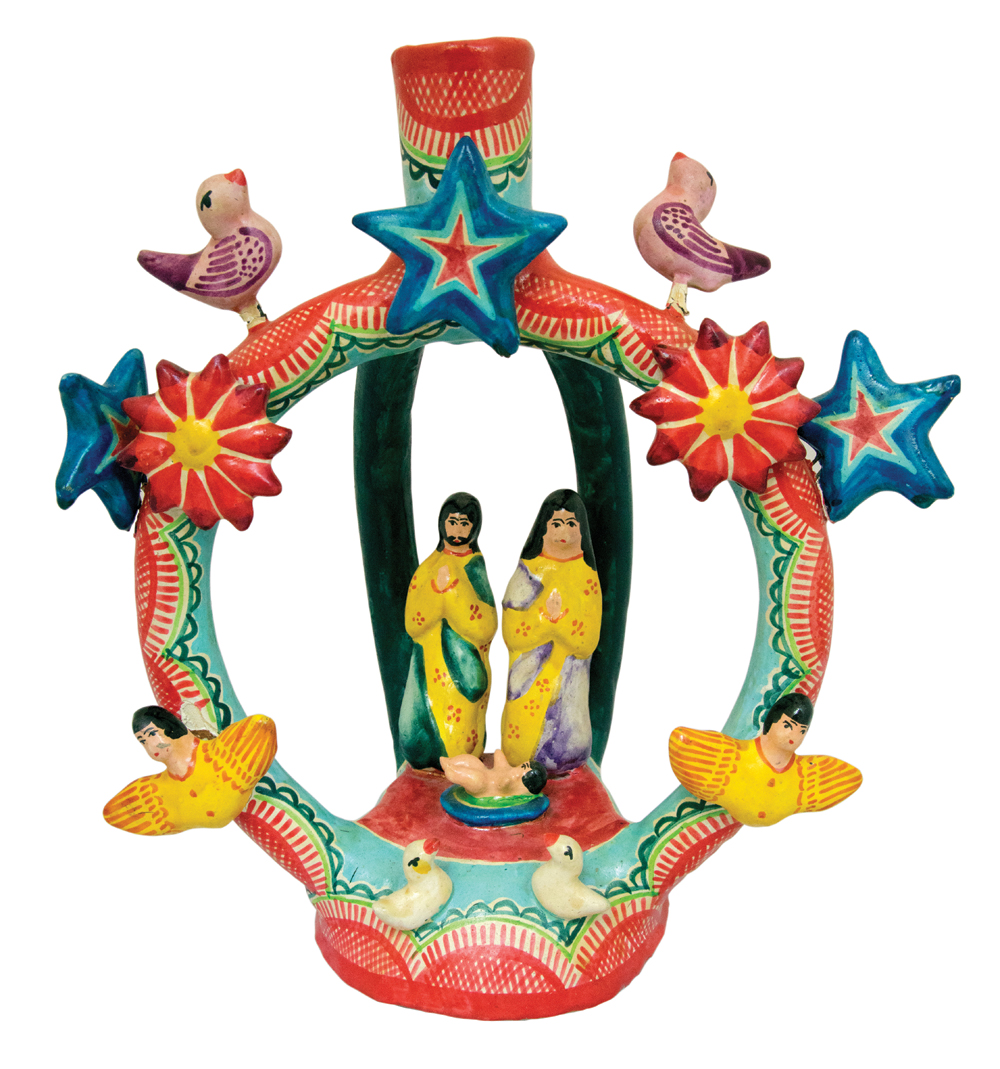 Similar to their efforts to visualize the fullness of Jesus’ humanity, artists have been flummoxed by how to characterize Joseph’s role in salvation history. Often to protect the foster father from being seen as a biological parent, Joseph is kept at a distance. A crèche from Hawaii offers a frequent solution. Housed in a sculpted coconut, this nativity scene uses elegant, simplified shapes. The representation of Joseph, placed outside of the shelter, turns him into a distant, silent protector. Though Mary is close and attentive, animals are nearer to his foster child than he is. 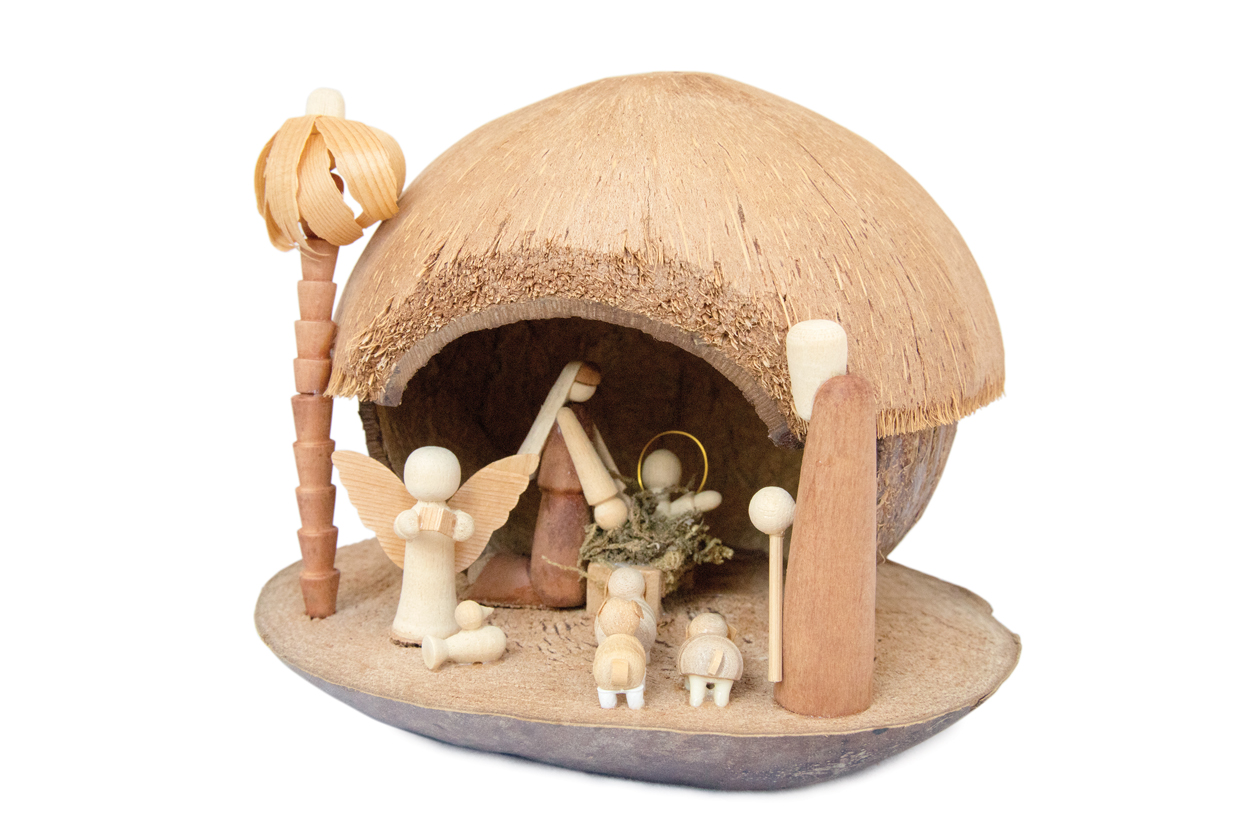 Francis of Assisi saw the humanity of Jesus, especially his birth in lowly circumstances, as a key to understanding God. Awed by the humility of Christ-becoming-human, Francis saw the “discomfort of his infant needs” as a covenant of accessibility, a measure of God’s desire to draw near to us. As we set up our nativity scenes this year, we are invited to see in the objects we arrange and touch the God who is with us, among us, and for us.