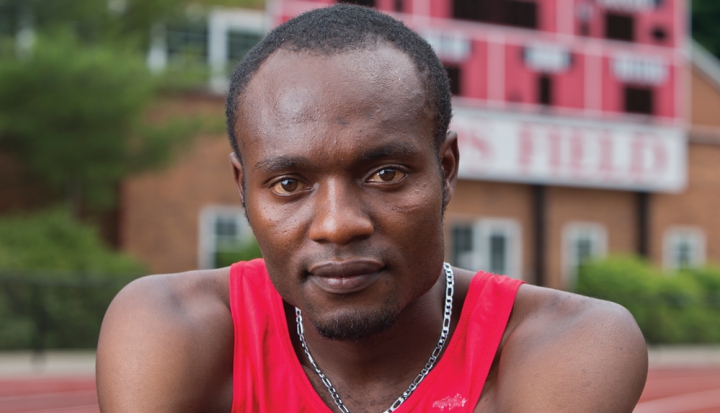 Dee Salukombo has run through it all—from a country ravaged by war to the rubber track of the United States to the Rio Olympics and back. Yet Salukombo is not running alone. Along his journey he empowers youth in the Democratic Republic of Congo to overcome the threat of war.

In 1988 Salukombo was born in the village of Kirotshe in Northern Congo. “We had a very good life,” he says of his family. “Until the war started.”

Congo has faced an ongoing string of wars, raging for control of a country rich with natural resources. The conflicts have killed more than 5 million people between 1994 and 2003.

Salukombo’s father became a target during one of the wars. He fled the country for nearby Uganda. Salukombo, his mother, and his six brothers and sisters had to stay behind. His mother would work 16-hour days. The days she came home with bags in her hand meant the family would eat, he says.

Salukombo recognized his luck when Catholic Charities helped him settle in Cleveland. On his first day of school, his teacher gave him a textbook to take home for studying. That was a life-changing moment, he says.

“That was the first time I owned any type of textbook,” he says. “Up until that point, all that I learned was something that my teachers wrote on blackboards and I had to copy in my notes.”

He graduated at the top of his class. Between studying sessions in high school, he fostered a love of running, too. His abilities on the track and cross-country courses landed him a position on the team at Denison University, a Division III school south of Cleveland.

Salukombo was a “once-in-a-lifetime runner,” his coach Phil Torrens says. He was the most accomplished runner Torrens coached during his nearly 40-year career, earning six All-American honors. “He is probably the most appreciative person I’ve ever met,” Torrens says. “When he met up with people, they were his friend forever. And likewise.”

Salukombo was more than an athlete to him. Torrens and his wife lost their 24-year-old son in a car crash the summer before Salukombo joined the team. “Dee helped us through that time,” says Sarah, Phil’s wife. “He filled a void for us, in that regard.”

After Salukombo graduated from Denison with a degree in chemistry, he set his sights on his next act: the Olympics.

But he was not going to train alone. He went back to Kirotshe.

In 2012 Salukombo started Project Kirotshe, a group of more than 100 runners ranging from 11 to 34 years old. He brought textbooks, too. To stay on the team, the children had to stay in school.

“In Kirotshe, when you talk about running, people just think about war,” he says. “When the war come(s), that’s when people are running. And I just wanted to take this beautiful piece that’s transformed my life and what’s happened to me. I wanted to take it back there for those kids. I wanted to because I came from there. I know the suffering. I know the pain. I know what people go through.”

Children were walking an hour and a half from the nearby mountains to attend practice. Some workouts were cut short with the sounds of war in the distance. There were moments when the team had to flee to the nearby forests to hide from soldiers. But, all the while, he and his team kept training.

Salukombo qualified for the marathon at the 2016 Summer Olympic Games in Rio de Janiero, where he finished 113th. His teammate from Kirotshe, Beatrice Kamuchanga Alice, also qualified in the 5,000 meters. Salukombo admits he wants himself or someone on his team to earn Congo’s first Olympic medal.

Yet he says Project Kirotshe is about more than running. Salukombo travels between Cleveland and Congo, working for Catholic Charities Migration and Refugees Services as a case worker to raise money and transport donations to Kirotshe. People often ship running gear and books to his house, he says. In 2013, he created the Torrens Learning Center, named after his coach, to provide access to books and computers. Ensuring the children on the team stay in school is the top priority. Project Kirotshe became Kirotshe Foundation and paid school fees for 64 students in 2016, about $40 for primary school and $100 for secondary school.

“I hope the seeds that we’re planting in those kids—the togetherness, the teamwork—that they’re also learning life lessons that they can lead for other people,” Salukombo says.