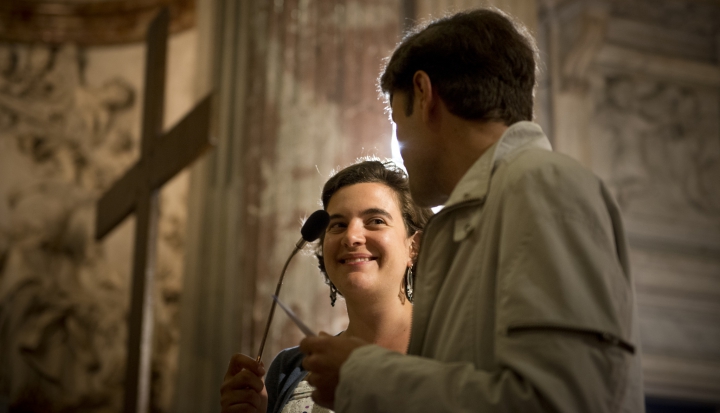 Most people don’t dream of working for the institutional church; it’s not high on the list for childhood career days or suggestions of what to be when one grows up. But I’m not most people.

As my time at Yale Divinity School came to a conclusion, my vocational discernment reached a turning point: I knew pretty generally that I was being called to work for the church, but I did not see the next step very clearly. The opportunity to enter diocesan work after graduation arose at the same time as other opportunities in Catholic nonprofits, some more in my comfort zone. I took the time to properly discern where God needed me to be and how God wanted me to use my gifts in service to the church. What became clear in prayer was this: I had spent time advocating for women and young people to take on meaningful leadership roles in the church, and now was the time for me to put my money where my mouth was.

So I said yes to the Archdiocese of Hartford, and Archbishop Leonard Blair said yes to hiring me as the archdiocesan media specialist and content management strategist. I had some experience in the field of communication, although my Master of Divinity prepared me for formation and pastoral work. Most important, I was happy to be employed with a just wage—not taken for granted when working for the church.

Not long after my arrival, though, the provost for education, evangelization, and catechesis, Sister Mary Grace, invited me to discern joining her faith formation team-in-progress—not in a role confined to appealing to Millennials, but as the archdiocesan director of adult faith formation. I would be tasked with overseeing adult sacraments (such as the Rite of Christian Initiation for Adults), creating formation opportunities for adults (such as an archdiocesan women’s conference), and rebuilding an archdiocesan lay ministry formation program. Later my responsibilities would be expanded to include collaborating with the Catholic school administrators on the faith formation of Catholic school educators and athletic staff. I would be using my master’s of divinity degree for the good of the church in Connecticut as a young adult in a true leadership role.

Nine months into my time at the Archdiocese of Hartford and six in the Office of Education, Evangelization, and Catechesis, I take time each morning before I enter the building to offer my day’s work to Jesus, giving both of us a pep talk that we need to show up to build the kingdom. I check my “imposter syndrome” at the door to the archdiocesan center: Though I am 25, God has placed me here to do something beautiful for God.

What my role demonstrates is a great degree of investment in a young person to do meaningful work in service to the church for which she is qualified—not writing her off until she has “paid her dues” or “earned her stripes” or giving her something menial while the grown-ups do the serious work.

Young Catholics are, in my opinion, the heart and soul, hope and life, present and future of the church. I am completely captivated by my peers who are doing the good work of the Lord, who labor well in the vineyard, and who make their parishes, dioceses, and nonprofits more vibrant, faithful, and Spirit-driven.

What do young people bring to the table, some might ask, besides spines hunched over smartphones and a curious affinity for selfies? I understand why there might be some trepidation. Those seasoned saints who have dedicated their lives—or the second half of their lives—to ministry might raise their hackles at the idea of an inexperienced young person sweeping in with technology, trends, and no institutional memory. Those worries about elevating young adults to leadership, I believe, are rooted in a subconscious protective love for the church; they have seen the ebbing and flowing of the tides and don’t want to let the waves of change knock down what they have worked so hard to build. I would implore them to rest assured that what they have built is on rock, not on sand, and the waves of change will only serve to wash the church with new life and energy.

I honor that concern. Where some might argue that those who feel that way are “past their prime,” I would counter that they are in the prime of a mentoring moment. They can choose to drag their feet about empowering young adults in leadership, claiming that young adults aren’t ready—thereby perpetuating the problem—or they can choose to participate actively in preparing those same young people well—thereby being part of the solution. Actively mentoring young adults changes lives, perspectives, and the future by sharing the wisdom of experiences and journeying together in discernment.

This brings me to another reason that hiring young Catholics benefits the church: It is succession planning. We know that this is a best practice of the business sector, so why do we not prepare in the same way in the church? If you value the work you do and the church you serve—and it is no secret that parishes everywhere are full of ministry personnel who feel exactly so—then why not prepare a successor to continue your ministry? That is truly the greatest gift you can give to the church.

So, what can happen when the church brings young Catholics into real positions of leadership? The benefits are myriad, but here are just a few:

The reality remains that the church has an opportunity to be on the forefront of meaningful evangelization and planning for the future by empowering young Catholics in positions of leadership. That success is, of course, contingent on the leadership acting intentional and with actual authority, the kind that is respected by colleagues and those they serve. However, when done authentically and well, the parishes and dioceses that do so dazzle as Spirit-driven and joyful examples of faith-filled communities.