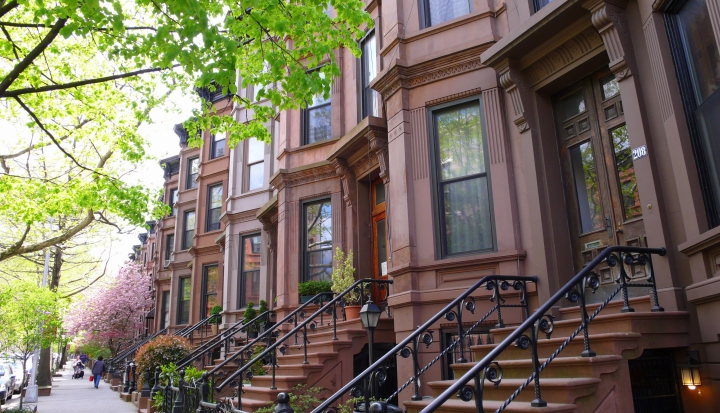 From the outside there is little evidence that the brownstone on New York’s Upper West Side is an unusual community. That is until you notice the crest on the door: a black and white design featuring a rose, a grain of wheat, and the name Benincasa. Step inside and you’ll find a committed lay community and a retreat center for young people to study, pray, and live out the liturgical calendar.

Karen Gargamelli, the community’s founder, had a vision for such a place many years before it came to fruition in Benincasa, named after St. Catherine of Siena, who was born with the name Caterina Benincasa. “It was the thing that was always on my mind,” she says. “The thing that I always talked about, this desire and this longing and this vision.”

For eight years Gargamelli practiced housing law with Jay Kim at Common Law, a legal practice the two founded together. Although she pursued her legal career based on a desire to work for justice, Gargamelli found it difficult to follow the gospel. “I had been formed by a Catholic education and driven by a spirituality that was linked to the gospels. I was seeking a profession based on a desire to serve,” she says. “Yet because I entered a secular world and secular profession, I was asked to follow the gospel inside huge bureaucracies. There was no support.”

Living alone in a studio apartment, Gargamelli looked for that spiritual support at her local parish, as “loneliness is real and pervasive,” she remarks. But she didn’t find it. “I have a sense that before my time parishes were places where people felt supported. I don’t know that the parish is really a home base anymore,” Gargamelli says. She didn’t feel fulfilled at her parish because she feels that parishes today “don’t have adult education in place for developing theological understanding. . . . There’s still more focus on sacraments and less on individual development.”

She thought back to a time when she did feel spiritually supported—her time living in a Dominican volunteer community—and wondered how she might have something like that again. “I felt very much drawn to religious life and to be a Catholic Worker. I explored making a commitment to both of those communities. For one reason or another neither one quite fit,” she says. “I was following the voice of God and had help discerning that there would be another path.”

Gargamelli took time off from Common Law to care for her dying father, and it was during that period she decided to pursue her vision of community. However, she had difficulty finding a physical location for the community. Her hunt for a home began by calling priests with empty convents. Each time, she encountered the same response: This seems important, but there’s a risk in renting to lay people. Then Blessed Sacrament, a parish on New York’s Upper West Side, took a leap of faith and decided to rent out their former convent, which had been mostly vacant for 15 years, to Gargamelli. Benincasa was born.

While they do work to revive the spirit of the sisters who used to live there, Benincasa promotes an idea of committed community less centered on vows and more focused on the idea of sharing prayer and a vision for peace and justice. Last winter there were four residents in addition to Gargamelli, among them was well-known peace activist Liz McAllister, cofounder of the antiwar Plowshares movement and the Jonah House community with her late husband, Phil Berrigan. Gargamelli has now stopped practicing legal work and serves full-time as the community’s administrator and handles communications and logistics.

In addition to a commitment to living together—Gargamelli says the number fluctuates between six and eight people—the community focuses on hospitality. It opens what it calls “Christrooms” to those who are in a crisis or a major life change and need somewhere to stay for a year or less.

Benincasa is also a retreat center. “Everyone comes the same way. Someone knows someone who knows someone,” Gargamelli says. Groups ranging from college students from Cincinnati’s Xavier University volunteering at Catholic Worker on alternative break to IfNotNow, an organization working to advance peace and justice in Palestine and Israel, to Cosecha, an immigrant rights group, have all been recent guests. There’s no charge for any of this—it’s free, part of the Benincasa ministry. In November 2016 the community also began using the Daniel Berrigan Center for Art & Activism, a meeting space that officially opened in April.

The vision Gargamelli had for herself and for the community is finally alive in Benincasa after years of dreaming. And while this may be only one community, Gargamelli believes its model of committed lay life dedicated to prayer, peace, and justice holds much promise.

Cynthia-Marie Marmo O’Brien has been recognized with a notable citation in Best American Essays. She has been published by America, Killing the Buddha, The Literary Review, Los Angeles Review of Books, and Narratively, among others.