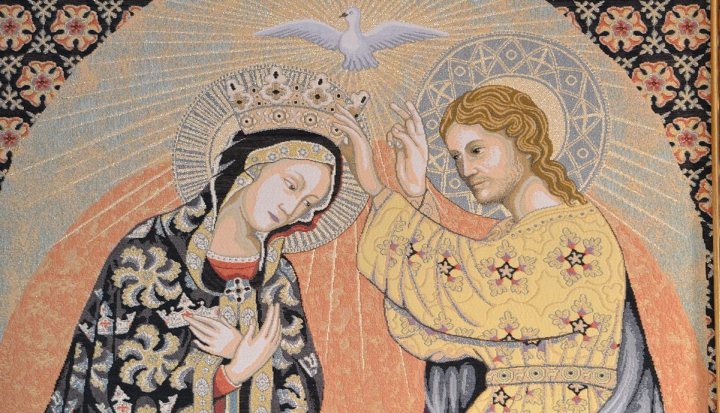 What did Mary have to do with being Catholic in the pre-Vatican II church?

I would not know how to begin disentangling her from the religion of my childhood. I learned “Lovely Lady Dressed in Blue” by heart in the first grade, brought lilacs to the shrine in the corner of the classroom in the spring, processed solemnly and happily in October and May, lit the candles, and sang the hymns. I shouted out her glories in the Divine Praises at the end of Mass in a grateful crescendo from the pit of a weak, empty, and soon-to-be-breakfasted stomach. The Miraculous Medal Novena was a fine place to meet your friends on a weeknight. And I knelt most evenings, however restlessly, with the rest of the family around the bed for the rosary, burying my head piously between my hands so I could pluck the chenille tufts from the bedspread without being seen.

It was not a matter of accepting Mary or rejecting her. She was there, alive and powerful, part of the texture, and it was richer because of her. Safer, too: Though hell was a vibrantly perilous possibility, she underwrote the likelihood of our salvation. She had a splendid flexibility; you could bring her the little things you weren’t supposed to bother God with and the big things you were too frightened to.

Her global awareness was also high. One day, we knew, she would save Russia. At the same time, the lilacs smelled incredibly sweet, and the organdy dresses we got to wear in the processions delighted my feminine heart. (I’m not sure how the boys felt—but then they paraded around in lace surplices every day anyway, serving Mass.)

Mary added zest to the church scene. We could speculate on the possibility of a Marian apparition. It was clear the United States was due for one, and after the Song of Bernadette we all lingered a little longer in the park on the way home from school in case she was looking for a young American girl to speak to. On the blank screen of the future, an ecumenical council never crossed our minds. The institutional church was stable, to say the least. The pope stayed put. Mary was the only one who traveled.

When people started organizing around her, however, the charm faded. There was nothing aesthetic about mass rallies in Yankee Stadium. Sodalities marked off those headed for the convent. “Mary-like” dress crusades narrowed your shopping choice to about 15 percent of the pagan department store rack, if you took them seriously.

“Moralized Mary” brought distinct problems. So did adolescence itself. The nun who leaned out the college dorm window at Saturday night curfew calling, “Child of Mary, you owe that man nothing” may have been apocryphal but she had roots in reality. And I know how the boys felt about that.

Her most compelling witnesses from my viewpoint were inadvertent. Suffering laid bare her quintessential mercy: I watched my father on his deathbed, utterly delirious, knowing no one, but still saying over and over, “Holy Mary, Mother of God, pray for us sinners . . .” I forgot all the chenille bedspreads I had destroyed getting through the family rosary. I could not go with him into that darkness. She could.

These memories are personal, colored by the perspective of growing up in an urban, first-generation, parochial culture, in a world that seems small and very far away. I smile at them now. But it is not a mocking smile.

Mary flourished for us, a white radiance of purity and compassion unable to be contained by the very boundaries of heaven. For women especially, her rites were more participative than “main-event” liturgy. Her hymns were sentimental but they expressed emotional hungers of which we had not yet learned to be ashamed even though they sublimated the sexuality for which we knew no other response. We might get the doctrines of the Immaculate Conception and the Virgin Birth mixed up, but we knew what all their technical words were trying to point to: She shone.

We were told Protestants were “down” on her, but we didn’t know why—probably jealousy because she was ours. It never occurred to us that there were any scriptural and theological problems or historical and psychological ones. For us, the woman who knelt before the angel at the Annunciation and held the child up for the shepherds and Magi to adore was the same woman who kept a practical eye on the wine at Cana and was wafted up through Murillo’s clouds and in the Assumption. And every now and then she wafted back down again to counsel prayer and penance and commission another cathedral or dogma.

This is old imagery now, and the questions connected with it are not to be taken lightly. With all our stress on her compassion, did we foster the image of a punishing God who was less than total love himself? Did we hand the poor a stone—her statue—instead of bread? At what price to our sexuality did we exalt the Virgin? What is the connection between the simple Jewish girl who mothered the Christ and various, sometimes conflicting scriptural accounts of her? What is the connection between this historical Mary and the omnipotent symbol which has come down through the ages? Who really tamed the Mother Goddess—the Protestants who pushed her back into scripture and ignored her or the Catholics who kept her alive, trapping her into sentimentalized and narrow political and social causes?

But imagery itself is not to be taken lightly either. “This luminous dynamic source of action,” as one writer calls it, “this embryo of vision,” is ignored at great cost: “The man who nurtures his imagery is himself nurtured, and to the extent that he respects it is he respected.” (For “man,” read “woman,” if you prefer, or “community,” or “church.”)

And Mary is deeply and dynamically a part of our imagery. The ecumenical movement, modern scripture scholarship, liturgical renewal, process theology, depth psychology, social justice movements, the changing role of women—all these have altered and refined our ways of looking at her. As I read them, they have not changed the central intuitions of our faith about this woman but have thrown them into bold outline, further sharpening our sense of the nature of faith and of devotions themselves.

This is not an irenic attempt to smooth over the chocks and dislocations of life in the post-Vatican II church. Nor is it a claim that “we” were right and beyond reproach in Marian matters, still less in the rest of our religious outlook and practices. It is a quiet, humbly glad belief that much has been stripped away, and much deserved to be, but that at the core remains a gift which will bear all our efforts to ponder and explore and understand. This gift supports us far more than we ever could—or need—support it.

What does Mary have to do with being Catholic today?

She has a profound connection, as the early councils knew, with the integrity of the human nature of Christ and so with the Incarnation, the basis of Christian flesh. The integrity of her own human being-in-the-flesh, the gift of her physical and psychic presence, nourishes divinity in a paradox that eternity itself will not be long enough to plumb. Stuck in our bodies, we learn to give thanks—Eucharist.

At the same time, she is deeply drawn by and into the transcendent, and the depths of her faith make her the model for all believers in a pilgrim church—called to go beyond her past, to travel in darkness and risk, to ask questions, to ponder, to pray, to face the infinite. She is not just for children. She is for that part in all of us that trembles before the Godhead and must learn to go through the terror into the smile.

Lastly, she is totally identified in love with her Son and so with his people—hence the link, ancient and modern, between Mary and church. Hence the sense of a relationship sometimes tenderly, sometimes ineptly expressed but fundamentally and unsentimentally true: To love Christ is to share his vision, to want humankind saved, not simply as individuals but in warm and wild and lively—and as yet imperfect—union.

Only by pondering on these truths, I think, will we work out the unresolved Marian questions of our time or at least enable ourselves to ask the questions in a way that is life-giving; a way that enables the various Christian churches with their different Marian insights to speak to one another and to the modern world; a way that calls women to known and share the full resources of their womanhood with church and society; a way that gives 20th- and 21st-century artists fresh impetus to express our feelings toward her in music, in painting, in sung and spoken prayer; and a way that will allow us to pass on to our children what was, after all, passed on to us: a simple and lasting intuition of love stronger than sin or death.

This article was originally published in the May 1979 issue of U.S. Catholic.