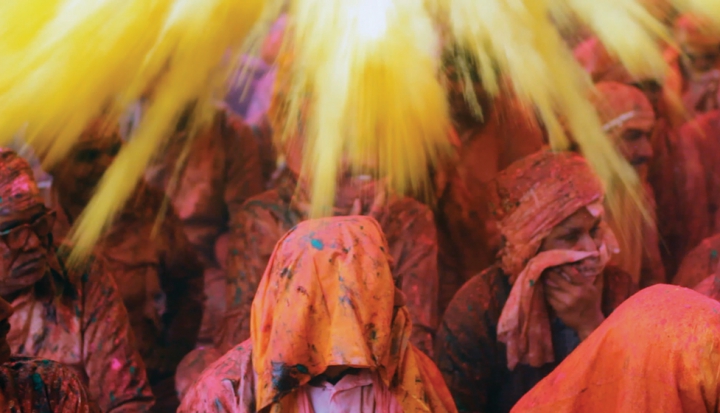 “From ancient times down to the present, there is found among various peoples a certain perception of that hidden power which hovers over the course of things and over the events of human history [and] the recognition of a Supreme Being . . . . This perception and recognition penetrates their lives with a profound religious sense.”

Those words from Nostra Aetate, Vatican II’s “Declaration on the Relation of the Church to Non-Christian Religions” could well serve as a summary, headnote, or statement of purpose for the new documentary film Sacred, currently enjoying a limited theatrical release and destined for PBS broadcast later this year.

Shot by 40 film crews in more than 25 countries, Sacred gives us intimate depictions of the wildly varying ways in which humanity seeks to align itself with that “hidden power.”

The film begins in silent, predawn darkness as a Japanese monk dressed entirely in white prepares to resume his task of walking 1,000 times around a sacred mountain. The scene dissolves to daylight and the birth of a child at a European hospital, then to a man singing the Muslim call to prayer to his newborn child, then to an infant baptism in Ethiopia. And so it goes, for the next 86 minutes, as mostly unnarrated snippets of footage from around the globe flow past us.

The film is divided into three parts—Initiation, Practice, and Passages—that focus on the rites of childhood and adolescence, the responsibilities of adulthood, and the relinquishments of old age and death. Along the way, we see a New York City couple holding their baby up for a glimpse of Pope Francis, a man in a mosque teaching his daughter the proper postures for prayer, a just-married couple bumping across the high plains of Wyoming in a ragged pickup, and an elderly Pakistani woman pilgrim being pushed around Mecca in a wheelchair.

Sacred was the brainchild of William Baker, longtime president of the New York City public television station WNET and now a professor at Fordham University. Baker enlisted Oscar-winning documentary director Thomas Lennon to work with a far-flung team of collaborators and assemble a unified whole from hundreds of hours of recordings. Lennon says his goal was “to plunge the viewer into a series of private experiences of faith and hopefully the intensity of that encounter shakes up our reactions, triggers something fresh.”

Flannery O’Connor used to say that her stories used the “grotesque” to communicate her faith because her secular audience was blind and deaf to religious truth. And there is some of that strategy at work in Sacred. The Japanese monk on his circular pilgrimage, for instance, will stop his walk to spend nine days in seclusion praying, without sleep or food. In the Malagasy region of Madagascar we see people ceremonially exhume their ancestors from the family crypt and parade the remains about to the joyous strains of a brass band. In the Philippines we see a man mark Good Friday by having himself, his very flesh, really nailed to a cross.

Alongside these scenes from these cultures, Sacred also depicts plenty of religious practices from the United States and Western Europe. But the fact remains that in our allegedly advanced societies the quest for a connection to something big and beyond has, for many of us, become a vexed topic. We may want the comfort and enlightenment of spirituality without the sacrifices of convenience or pleasure that come with religion. And many of us have a hard time committing to any belief system more specific than the relativist creed that all truth claims are created equal.

Still, whether the venue is a yoga studio or a 12-step meeting, evidence abounds that the hunger for depth and direction persists. As another passage from Nostra Aetate puts it, “The unsolved riddles of the human condition . . . deeply stir the hearts of men [sic]: . . . What is the meaning, the aim of our life? What is moral good, what is sin? Whence suffering and what purpose does it serve? Which is the road to true happiness? . . . Whence do we come, and where are we going?”

Judging from the evidence on display in Sacred, our ways of seeking answers to those questions are both strikingly similar and radically particular. The half-sari coming-of-age ceremony for Hindu girls looks a whole lot like a quinceañera. At a Muslim wedding in a Lebanon refugee camp, we see the happy couple held aloft on chairs, just as they are at Jewish weddings. The Buddhist boys in Myanmar whose initiation requires them to live in a monastery for a week are not that different from Jewish boys who endure months of Hebrew lessons before their bar mitzvah. The thousands of young Hasidic men we see pogoing in the Ukrainian streets seem like cousins to the shirtless Muslims doing a sacred step show in the streets of Rawalpindi.

But the tie to the sacred, however universal, is also always incarnate, bound by a specific place and culture. It’s about these bones in this crypt. Circling this particular mountain. Praying on this Judean hilltop, or walking around this particular black stone in Mecca.

We spend much of the last section of Sacred with a very ordinary suburban Connecticut woman with a terminal diagnosis who finds her last days illuminated with a new understanding of prayer and a new vocation of offering prayer for others whose requests come to her on the internet. As the film comes full circle, ending with the sound of a newborn’s first cry, it challenges us not to become voyeurs of a global religious freak show, but to find our own sacred place and time right where we are.