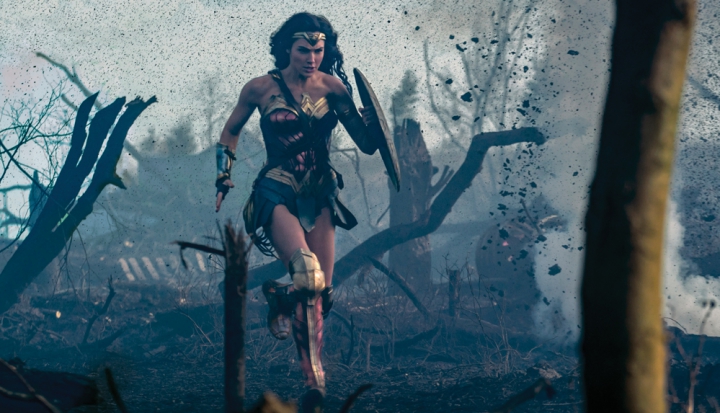 In Wonder Woman, there are moments so uncommonly witnessed in film that the audience can almost hear paradigms shifting, like giant tectonic plates of cultural attitudes grating over one another as they struggle to realign. Of course, such shifts should have happened long ago, or should have never been needed at all, and there have been lesser and occasional positive tremors along the fault lines before, here and there in film.

But the current production of Wonder Woman brilliantly bundles a female protagonist of superior physical strength, compassion, and logic with pyrotechnical computerized special effects and unusual restraint regarding cleavage, and voila! suddenly a woman becomes a marketable hero, possessing the physical power and athletic ability that male viewers value and monopolizing the screen as a solo object of attention in a way that only Terminators and Iron Men have done before.

One such moment is when the World War I German army storms the beach of the peaceful island of Themyscira, home to Wonder Woman and the all-female tribe of Amazons. It is an all-too-familiar story to moviegoers and historians: modern imperialistic military forces attack an indigenous people and mow them down with mechanized weapons. Wholesale slaughter seems inevitable until an army of well-trained professional warrior women (not a cavalry of men) charges over the cliff, leaping down on ropes and raining down arrows, thundering over the sand on horses, swinging swords with deadly accuracy. The camera lingers on the Amazons’ airborne martial arts acrobatics, freeze-framing the somersaulting flying kicks and whirling, leaping delivery of flaming arrows to admire the physical prowess of the women in a manner previously reserved for the likes of Bruce Lee. A disciplined wedge of riders drives toward the Germans, slashing through their ranks and literally kicking sand in their faces before the invaders are driven back into the sea.

In another moment, Diana Prince must cross No-Man’s-Land unarmed. The men in her small band of followers say it can’t be done, but it needs doing, and so she simply does it. In a classic hero’s journey narrative, she sheds the costume that disguises her true identity and steps into the role she was born to occupy, walking through fire and striding across the battlefield. By the time she reaches the other side, she has become Wonder Woman. She faces no single individual but instead weathers a storm of impersonal deadly force (a metaphor not lost on women in the audience who face prejudice, sexism, and harassment), walking and then running toward her target with steely-eyed determination.

When the onslaught becomes too much, she drops to one knee, raises her shield, and leans into a hail of bullets. It is a breathtaking shot of a woman in the prime of her power—and that power is athletic rather than sexual. This is new. We are used to seeing women on screen through the prurient eye of the camera that views the female form as does a heterosexual male, lingering on exposed skin and curves. Gal Godot is a stunningly beautiful actress, but rather than exploit her body, here the acting, direction, and camera come together to show something revolutionary: a woman’s accomplishment.

To understand why these two moments, among others, bring many women viewers to tears and why the film moves women profoundly, it is necessary to understand the power of representation in media. White, heterosexual males are the heroes of most television and film, and non-whites, LGBT persons, and women have learned how to imagine themselves into popular culture narratives that in many ways exclude their lived experiences—strategies most white men have never had to employ. Media show us who we are and who everyone else is, too. Seeing people who look like you on the screen and on television is a way of seeing yourself fitting into culture, society, and communities. To rarely see your race, nationality, or sexuality portrayed, or to see it portrayed only in limited and denigrating ways, is so damaging that media scholars have called it “symbolic annihilation.” This is why “firsts,” like Halle Berry becoming the first African American woman to win a best actress Academy Award, matter.

Of course, there have been female action heroes in video games, film, and television—even earlier Wonder Woman iterations—but they have been frankly sexualized and scantily clothed, appearing as eye candy for male viewers more than as inspiration for female ones. And even this wonderful Wonder Woman succeeds because it presents a woman as strong in the ways that men value—but there have been film stories of women who are strong in the ways women are strong every day, heroines of the non-super variety. The biopics Silkwood, Norma Rae, and Erin Brockovich chronicle important female activists who persevered despite significant and sometimes even violent opposition. Historic depictions of actual female achievement, such as Cate Blanchett’s Elizabeth and the tale of NASA mathematicians Hidden Figures, begin to flesh out overlooked or minimized women’s stories. The real-life struggles of women facing gritty issues such as trying to raise children alone while earning a third less than similarly educated and experienced men, for example, don’t draw inspired soundtracks or big marketing campaigns, but that’s a type of heroism that is observable in communities across the country every day.

After watching this film, I lingered to read the credits. As the lights slowly rose, the person seated in front of me was revealed: a little girl clutching a Wonder Woman doll in her fist.

Advertisement
TagsCulture in Context TV and film Women in the church