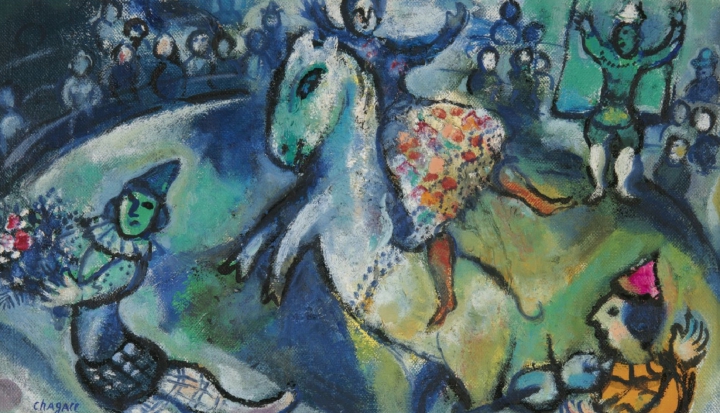 Why does the thought of a circus creep me out? Until recently, I’d experienced only one back in my teens. Unlike folks who report being afraid of clowns, I didn’t find the bulbous-nosed performers or their deeply physical brand of comedy at all scary. Nor did the exotic animals or high-wire acrobats provide me much cause for fear. The minor traveling troupe in their worn tent pitched on muddy ground outside of my little hometown seemed simply sad to me. Tired, really. As if they wished the performance were behind them so they could get on with whatever they did after the show. The performers didn’t seem much different from my dad, who arrived home spent from his dreary job, looking for his supper, a glass of wine, and an evening in front of the TV.

Any circus that stopped in my town for five minutes must have been desperate. None made that gamble again, so I didn’t have to go out of my way to avoid another encounter. But in the past 30 years the circus has gone upscale, with the arrival of Cirque du Soleil and Cirque Dreams on the entertainment landscape. These companies invite us to rethink the Big Top as highbrow art rather than marginal sideshow. When the circus comes to town now, it rents the same stage palaces as Broadway plays.

It seemed time, therefore, for me to put away the memory of a single adolescent experience. Still, my apprehension of circuses had expanded over time, from a sad affair to something foreboding. Was it the Hollywood portrayals of circuses as shady havens of drifters, thieves, runaways, and victims of tragic abnormality that filled me with anxiety? Had the word freak been used to describe these migrant performers too many times to erase the impact? When friends scored extra tickets for an upcoming Cirque du Soleil show, I determined to put away my unease and attend.

The night was two hours of sheer impossibility. I rarely breathed and couldn’t take my eyes off the performers. What they did was mystical, terrifying, sublime. The entire show was a theorem of balance—seemingly unthinkable, given the conditions placed on the actors, yet somehow stunningly achieved. The thought lodged in my brain: If I had a fraction of their courage and resolve, I’d be a saint today. If I had faith in anything as much as they believed in their ability to conquer gravity, I would, as Jesus said, be out there moving mountains.

If I had faith in anything as much as they believed in their ability to conquer gravity, I would, as Jesus said, be out there moving mountains.

Is the new circus a spiritualized rendition of the old, liberated from all the clowning around? By no means. What I witnessed was definitely a descendant of vintage acts: high wires, hoops, unicycles, and faux-bumbling individuals in gaudy costumes. Like a classic big tent performance, this one moved from comedy to suspense to horror, moment by moment. I kept anticipating a death right before my eyes. The odds were that someone should have died in the series of lunatic feats performed that night.

At the same time, the performances appeared effortless. Beautiful. Enthralling. Uplifting! This was ballet, or art—only the dancing was mostly off the ground and the medium was the human body. Moved by the courage invested in each presentation, I waited for the intermission to learn the names of these artists. Surprisingly none of the performers’ names were listed in the program. Instead, they were anonymously categorized as hailing “from Russia, Ukraine, Germany, Mongolia, Romania, Ethiopia, and the United States.” This seemed odd, especially as every last producer and accountant was identified precisely.

How strange not to know who our benefactors were, these living sculptures of grace on the stage. Passionately they assumed marvelous shapes and embraced inconceivable perils and then vanished cleanly into anonymity. Yet they risked their lives for us bravely, every single one of them, that night. That made the experience feel almost eucharistic. The pious may roll their eyes here and say that I confuse entertainment with salvation. This was not entertainment. Few in the audience would describe the night in those terms. For two straight hours, nameless actors offered themselves like a gift wrapped in shatterable flesh and bone. They danced beauty and terror into our souls, confiding in us an eerie story of what it means to be human. We died with them in each peril. We rose with them in every unimaginable victory.

Honestly? It was an exhausting enterprise, an Easter liturgy presided over by jugglers on skateboards atop exercise balls wobbling on furniture perched precariously aboard cantilevered blocks. No one should attempt such acts, and no one should survive them. The name of the game was balance, lives poured out in an endless pursuit of balance, the quest for an ever more extraordinary balance was the driving force of every life risked on that stage.

I left the performance hall shivering, and it wasn’t from the cold. I was overwhelmed with respect for these potential martyrs on the altar of balance. I wanted to know their stories, how they had come to say of their vocation, as I say of mine: This is what my life is for. Was it fear of poverty or of being excluded from the troupe that compelled them to attempt ever more dangerous feats? Was it a longing to be embraced by this peculiarly elite community, or was it some need within each performer’s own breast that urged them to put their lives on the line night after night?

I wanted to know their stories, how they had come to say of their vocation, as I say of mine: This is what my life is for.

These questions were not just for them but also for the rest of us. What drives us to do what we do with our lives: to take the biggest risks, to seek the goals that shine most brightly for us? Why do we perch on our particular and unlikely set of circumstances, shuddering all the while knowing how fragile we are and how absurd our chosen path must seem to others who don’t share it? These days the religious quest seems to many about as sensible as a high-wire act. Why gamble so much for what seems like so little? Why place your very life in jeopardy for the intangible, the invisible, and the mysterious?

Most of us, to be sure, will remain anonymous performers on this stage. Our names won’t be logged or our images canonized. If we’re wise, we’re not here for the applause or to make ourselves understood. The gospel invites us to throw our lives down so they may be lifted up and to hurl away our present property for an unseen kingdom. We save these lives of ours most effectively when we lose them—which is nonsense, until you actually do it. The painter George Rouault had it right. He portrayed clowns and Christs with tragic interchangeability in portraits that resembled stained glass, as if to underline the absurdity and sanctity of lives surrendered to howling and indifferent crowds.

Following a crucified Lord makes us fools for Christ’s sake in the eyes of the sensible, as Paul warned his Corinthians. If we persist in the foolishness of faith, we will continue to risk much, to dare more, and to escape the grip of gravity on our courage.