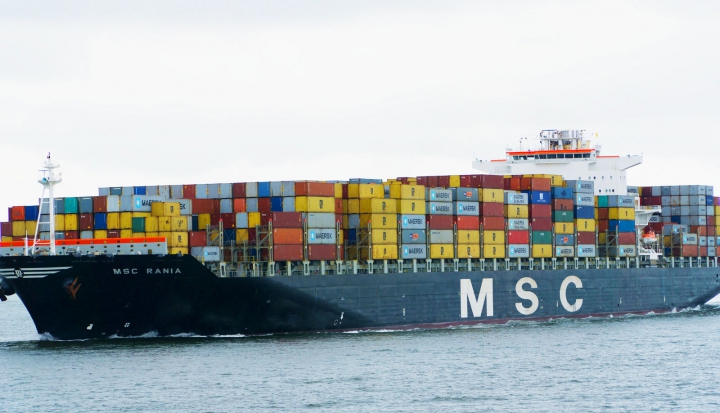 Most of us devote little thought to ocean-borne shipping. Yet it plays an enormous role in our lives, as around 90 percent of everything that needs to go from point A to point B does so on the seas. As Americans, globalization has risen to the top of our national discourse and as Catholic Christians, how globalized shipping affects workers and the environment resonates deeply with our sense of community, stewardship, and economic exchange. A new audio documentary has the potential to draw many people out of their ignorance of the shipping world: Containers, produced and hosted by Alexis Madrigal in March 2017, focuses on the omnipresent shipping containers driving our consumer economy, centering around the ships going in and out of Oakland, California.

The organization I work for, the North American Maritime Ministry Association (NAMMA), serves as the professional association for port chaplains and volunteers in the United States, Canada, and the Caribbean. Beyond the day-to-day work of supporting, encouraging, and networking port chaplains, NAMMA also advocates for the rights of seafarers and fosters innovative methods to connect seafarers to welfare resources. A push to raise public consciousness of shipping and seafarers undergirds all of what we do. Without seafarers, you wouldn’t have the tablet, phone, or computer you are reading this on; you likely wouldn’t have a stitch of the clothing you’re wearing; you wouldn’t have the coffee you might be drinking; and you wouldn’t have the car that’s sitting in your driveway, garage, or parking lot. Well, you might have them—but certainly not at anything close to the price you paid for them.

If these are all revelations to you, rest assured I felt the same before I started working for NAMMA in 2015. What journalist Rose George calls “sea blindness” afflicts even people from places with a historic presence in seaborne trade. The British Maritime Foundation commissioned a video in 2011 on just this subject. They interviewed people on the streets of Southampton, one of Britain’s longtime most important seaports, and asked what percentage of goods were imported by sea. The answers were revealing: “25 percent?” “35 percent?” “Not a lot?” The interviewees were stunned at the real answer—over 90 percent. Ian Urbina, an award-winning journalist currently with the New York Times, wrote a blistering series of articles in 2015 revealing the extent of the abuse and crimes committed at sea. Even he, a man with a Pulitzer to his name and thus pretty well in-the-know, had been totally unaware that “in a typical year, a ship sinks every four days. From 2,000 to 6,000 mariners die in accidents annually, and more than 500 are held hostage. . . I had no idea how dangerous it is to be a mariner.”

What both my time with NAMMA and Containers have done is prove how closely integrated shipping is with our economy. Drive to your local big-box store and just about every non-food item has arrived on American shores by ship (and no small amount of the food, too). Raw and semi-finished materials, like parts for your above-mentioned car, have the same backstory. Yet our unawareness of the shipping industry is part of a broader problem: How often do we think of domestic farms, the daily work of government functionaries, or service workers in any number of sectors? In forcing our gaze to shipping, Containers reminds us that many more people shape our daily lives than those we encounter directly. These people occupy mental “peripheries”—a word Pope Francis has deployed to indicate people and places often overlooked—even though they’re woven into the woof and warp of our daily lives.

Madrigal has similarly woven several strands through Containers, each episode of which covers a different topic. First and foremost, shipping exerts an influence over almost every aspect of the modern economy. While Madrigal steers clear of overt political commentary, his explanation of world trade concludes that protectionism will not work if we remain attached to how little we spend on consumer goods. As he notes in the first episode of the show, containerization in the 1960s meant factories could function far from port cities, shipping their product by truck or rail to waiting vessels. This portability also meant that factories could serve multiple ports, eliminating the need for manufacturing in each place. Furthermore, containers require a fraction of the labor needed to handle loose cargo (like bags of coffee); massive gangs of longshoremen thus became obsolete. Madrigal make a (mostly) apolitical observation when he notes that politicians’ guarantees to return manufacturing to American workers have little chance of success: “Port cities are never going to be what they once were. Cargo will never be handled by hand again. And most of the jobs that people think have gone to Mexico or elsewhere have actually just been made obsolete by automation.” Related is the ever-shrinking average size of ship crews. It’s not uncommon today for perhaps a dozen seafarers to crew a ship carrying millions of dollars’ worth of goods or resources. And as technology makes ships smarter and more efficient, crew sizes will only get smaller. Companies are already exploring the possibilities of 100 percent autonomous ships.

The show’s superficial treatment of seafarers, who are literally the lifeblood of the shipping industry, presents an obstacle to listeners. Awareness of the work of these men (rarely women) falls squarely within the Catholic tradition of social teaching, often said to begin formally with Pope Leo XIII’s 1891 encyclical Rerum novarum (On Capital and Labor). The pontiff wrote that “justice. . . demands that the interests of the working class should be carefully watched over by [governments], so that they who contribute so largely to the advantage of the community may themselves share in the benefits which they create—that being housed, clothed, and bodily fit, they may find their life less hard and more endurable.” In what conditions do seafarers work? What could be improved, and what works well?

The fact that Containers devotes an entire episode to mariners makes the show’s neglect to dive deeper all the more disappointing. Madrigal does highlight some of the difficulties inherent in seafaring life. His interviewees did not allow him to use their names in recording for fear of being blacklisted. He notes the ethnic hierarchy that often characterizes the officer/crew divide on board, and one of his interlocutors talks briefly of the pain of separation from family. Unfortunately, Madrigal does not probe further. He also seems unaware that the amount of time he has with “M,” one of his interviewees, is highly anomalous: Most seafarers have no more than a few hours ashore, if any. As Rose George put it in her book Ninety Percent of Everything, “Buy your fair-trade coffee beans by all means, but don’t assume fair-trade principles govern the conditions of the men who fetch it to you. You would be mistaken.”

Containers will appeal to listeners who want to know where to find the marginalized and what concerns plague them. Containerization has forced many to find other work, even as it has made our systems of trade more efficient and less wasteful. Those with an interest in how we have arrived at the current economic moment and where we may end up in the future will find the show an essential experience. As one of the most significant drivers of economic modernization, containerization teaches a textbook lesson in globalization, its promise, and its potential liabilities.

The lessons we learn from Containers can also apply to many other industries. So many aspects of our lives depend on an incredible amount of time and energy expended by those we never think of. When I put my garbage bin on the curb, I know it’ll get emptied—by hand in heat, rain, or snow—on Tuesday. When I look in the mail slot at noon, I know something will be there. None of this just happens—someone has to do it. Remember that the next time you buy something at a store. Or look around right now and thank the nameless mariner who brought all the stuff that surrounds you.

NAMMA’s president, Rev. Marsh Drege of Seafarers’ International House in New York, describes ministry to seafarers as making sure they know they are seen, that they are valued. In so many cases, they remain unseen; we cannot but admit that this rings true in many aspects of our lives. If Containers succeeds in only one way, it’s to help broaden our view to take in not only ports, shipping, and seafarers, but an entire community of laborers who help make our lives easier every day—even if we do not see them ourselves.

Michael Skaggs is Director of Programs for the North American Maritime Ministry Association.