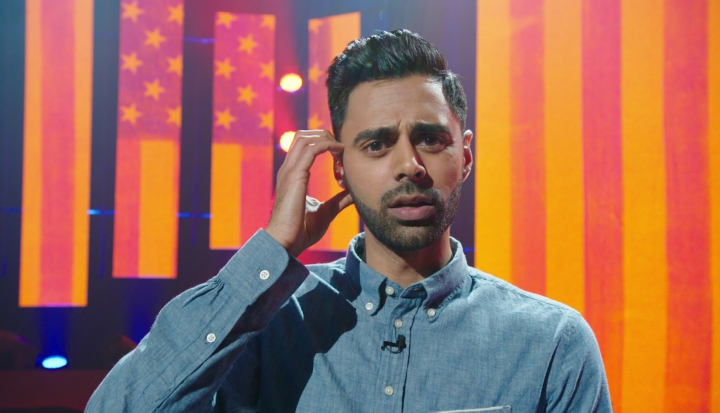 When you think of a traditional comedy show, you might think of a single microphone, a spotlight, a cup of water, and a brick wall that a comedian stands in front of to deliver a string of jokes. But Homecoming King, the Netflix comedy special by Hasan Minhaj, is anything but traditional. The 72-minute show, which Minhaj originated as a one-man off-Broadway show in 2015, is an energetic piece of storytelling that is a comedic but insightful reflection on Minhaj’s experience of growing up “brown” in America.

Only 32 years old, Minhaj recently performed at the White House Correspondents’ Dinner and is a regular correspondent on The Daily Show. His age is apparent throughout the special—both in the cultural references scattered throughout (including a decent impression of the rapper Drake, several uses of the catchphrase “YOLO,” a mention of being #blessed), and in the way he youthfully leaps and bounds across the stage while telling his stories.

Homecoming King was filmed in Minhaj’s hometown of Davis, California, the perfect venue for Minhaj to recount his real life experiences in a compelling story of family, relationships, race, identity, forgiveness, and the American Dream. The crowd looks large, but the show still feels intimate, thanks to unique cinematography that often finds Minhaj addressing cameras directly.

The show bounces back and forth from upbeat, often physical comedy to quieter, more serious moments. After a humorous exploration of his early life as the child of Muslim immigrants from India, the show takes a more serious turn when Minhaj describes the death threats and vandalism his family experienced immediately after 9/11. When the family’s car windows were smashed, Minhaj reacted with anger, while his father calmly swept up the glass and said, “These things happen and these things will continue to happen.” It was a defining moment where Minhaj realized the large gap separating him from his father’s generation—his father saw racism as part of an “American Dream tax,” while Minhaj, born in America, had the “audacity of equality.”

This gap surfaces again when Minhaj is introducing his family to his eventual wife. Her family is Hindu—a point of contention for Minhaj’s Muslim family. About to meet his future daughter-in-law, Minhaj’s father repeats an oft-spoken phrase from their household: log kya kahenge, “What will people think?” Minhaj and his sister become upset, believing that something bigger besides religion, race, creed, color, or class unites them with all people. “How many times behind closed doors do we complain about racism in our community?” Minhaj asks. “All the time. Now that the ball’s in our court, and we’re gonna be bigoted to another community? God’s not up in heaven being like, ‘You’re racist, good job, that’s what I always wanted.’”

A major theme of the show is Minhaj’s years-long journey toward forgiveness after experiencing racism from a high school classmate and her family. “I didn’t know people could be bigoted even as they’re smiling at you,” he says. “People who say they love you and are afraid of you at the same time.” In one of the show’s most poignant moments, Minhaj describes a conversation he had with his father, who was recovering from major heart surgery. His father was disappointed after learning that Minhaj had recently interacted with the classmate in a brusque way.  “Why didn’t you forgive her?” he asks his son. He implored Minhaj to be the bigger person. “You have to be brave,” his father urged. “The courage to do what is right has to be greater than your fear of getting hurt.” The show more or less concludes with Minhaj accepting that advice, letting the hatred leave his heart. “Love intrinsically is bigger than fear,” he declares.

Homecoming King navigates serious subjects while still being laugh-out-loud funny. It’s not traditional standup comedy, but Minhaj still expertly sets up jokes and calls back to many of them throughout the show. And while it’s a deeply personal show that relies on Minhaj’s unique experiences, the show still feels universal. His story may be different than yours, but we’re all here together in, as Minhaj describes it, “this fair and lovely world.”