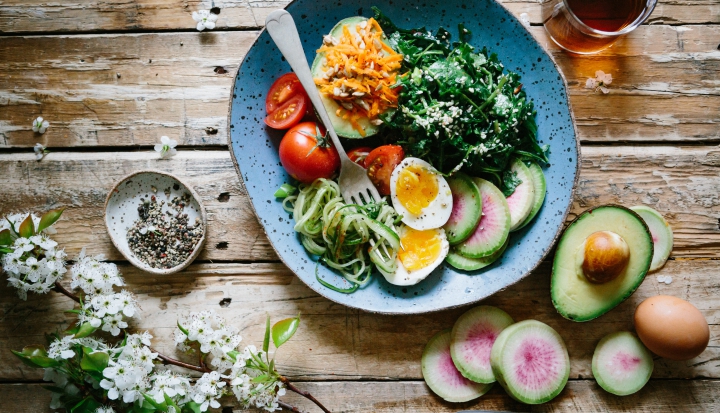 I suspect “Catholic” is not the first identity marker most people think of when they think of a vegetarian. Yet for many Catholics—myself included—a vegetarian or vegan diet is an integral part of our religious practice.

Darleen Pryds, a professor of Christian history and spirituality at the Franciscan School of Theology in Oceanside, California, says that being mindful about the food you eat can be a spiritual practice. “It’s a Franciscan approach to spirituality, focusing on poverty and simplicity,” she says. “For me, the very basis of that habit has always been food.”

Sister Christin Tomy, who currently works as Care of Creation Coordinator for the Dominican sisters in Sinsinawa, Wisconsin, also connects vegetarianism to her religious identity. She connects what she eats to her religious vows and says, “I am choosing not to eat meat because it is one way of limiting my tendency to overconsume, something I see as part of my vow of poverty. It’s not just about meat, but consumption in general. I have a commitment of living simply to be more mindful of people who live in real poverty. I would like to see food and our diet be more a part of that conversation.”

After college Tomy spent time as a Jesuit Volunteer in Belize, where part of her work involved butchering chickens. “I am not on principle opposed to eating animals. Human species have been meat eaters; animals eat other animals. But other cultures have prayers and rituals for killing an animal. We have no respect for taking an animal’s life, and this leads to a devaluing of human life. I think everyone should have to see where meat comes from, then make a decision,” she says.

The connection between the devaluing of animal and human life deeply resonates with me. As a teenager I was inspired by my mother’s activism to participate in the pro-life movement. In my Catholic elementary school, I was taught that human life was sacred from conception to natural death. Though I believed this wholeheartedly, one aspect did not sit well with me: the emphasis on the word human. As an adolescent who had always loved exploring woods and fields, catching turtles and frogs, and treating my dog like a best friend, I just could not believe that other living things were less sacred than us.

My decision to become a vegetarian came on gradually. As a child, I believed that the cows, pigs, and chicken I consumed on a daily basis led idyllic lives on spacious farms in the countryside. At age 14 I saw the Chris Noonan film Babe and received a much less pastoral picture: pigs kept indoors in a large, industrial warehouse. That image (which really is quite humane compared to much of the actual footage from today’s factory farms) convinced me to give up eating pork and beef. When I left home for college and found that vegetarian meals were regularly available in the cafeteria, I gave up poultry as well. Sixteen years later, I do not miss meat at all.

Other Catholics saw an inconsistency in scripture or ethics and our actual meat consumption. Mo Woods, a Canton, Ohio halfway house worker who became vegan in 2015, thinks that many Christians have misinterpreted our scriptures and, indeed, should consider the implications of what they eat more carefully. “The mistreatment of animals is not what God ordained in Genesis. God gave us dominion over animals, but this means we are managers, not owners. If you were managing a restaurant, would you have the right to destroy everything? God did not tell us to put animals in tiny spaces and hurt them so we can eat a burger three times a day,” she says.

Ariane Van Den Hof, a Dutch administrative assistant currently living in Austria, also points out the inconsistencies. “We spend a huge amount of money on our pets, take care of them, and go to the police if we see them mistreated. But when it comes to animals that we eat, most people prefer not to think about how they are treated,” she says.

I believe there is a clear link between our unwillingness to consider how animals are treated and an unwillingness to think of how the vulnerable people in our society are treated. I currently live in Iowa, a state where meat processing is one of the main industries. Many of the people who work in this industry are undocumented immigrants who lead tough lives that include the risk of deportation.

In 2008, the tiny town of Postville, Iowa was the site of one of the largest single-site immigration raids in U.S. history, leading to the immediate detention of 389 workers and the disappearance of a thousand more over the next weeks. I see an uncanny resemblance between the vulnerable, devalued animals led to the slaughter and the vulnerable, devalued people we charge with slaughtering them.

I would rather not support a system that systemically devalues both people and animals. But such a commitment is easier said or done, and it is hard to withdraw full support from these unjust systems. After all, I still eat cheese, which arguably causes more animal suffering than beef production. And I’m no ascetic; ask me to give up chocolate or wine or pretty dresses or travelling—all of which are entangled with ethically unjust systems—and you’ll see a different reaction.

But luckily God does not call us to be perfect in our religious and spiritual practices. Going a week without prayer does not make the time you do sit down with God any less valuable. Likewise, our failure to be perfect does not negate the good works we accomplish. Vegetarianism is no different: it doesn’t have to be all or nothing. For many, their culture or living circumstances mean that complete vegetarianism isn’t an option.

Mo Woods says, “In my job at the halfway house I sometimes have to cook government meat for children. This food is not healthy, and if I could, I would want to give them something different. But I am glad they are at least receiving food and love.”

Sister Tomy also points out the discrepancy between our ideals and real life. “For our depression era sisters, price is the bottom line,” she says. “Our generation is a lot more nuanced in our understanding of a local economic system. Do I spend more money for local produce that was grown organically, or do I go for what is cheapest? It brings the conversation back to our values and our faith.”

Catholics inevitably have different opinions on the ethical nature of eating meat. But Sister Tomy raises an important point: the topic of vegetarianism is a reminder that what we eat is intrinsically connected to our religious and spiritual life.

Photo by Brooke Lark on Unsplash