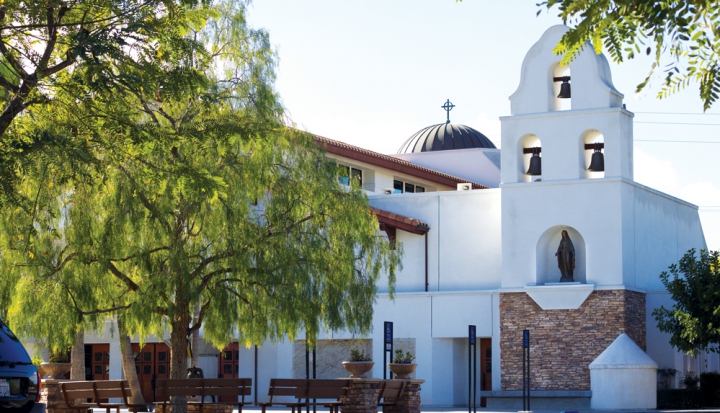 A wet knot on a pair of sneakers is hard to untie—even harder when they’re on your feet. As the pastor of a multigenerational, multicultural, and multilingual (Spanish, Vietnamese, and English) parish, I at times feel responsible for untying a lot of wet knots.

Farm workers from Central Mexico founded the parish where I serve, La Purisima Church in Orange, California, in 1923. They gathered under a pepper tree for Mass until they saved enough money for a wooden mission church. The parish built a new church in 1958 and another in 2005. Normally new construction signals a healthy community coming together. However, the Hispanic community came to believe that the parish was discriminating against their community and started picketing on the sidewalk before the new church opened in 2005. Protests continued through 2014.

I did not serve at the parish during most of its history and can comment only on the repercussions. However, I don’t believe enough people considered the effect the new large worship space, driven by donations from mostly white parishioners, could have on others. For example, a large new sanctuary meant fewer Sunday liturgies. But who gets the favored morning or best vigil times?

The new Mass schedule offered 10 liturgies in English, one in Vietnamese, and one in Spanish. This created a sense of loss and alienation for the Latino community, who founded the church and yet felt they were not welcome. The new church, they felt, neglected to value them as agents of their own pastoral needs or religious practices. The energy of the parish focused on the new building and not on the pastoral life of the Latino community. Eventually, their alienation and disempowerment found expression in picketing, which began before construction was completed and lasted for almost a decade.

Over the next nine years, the parish went through three different diocesan pastors until, in early December 2014, Bishop Kevin Vann asked me to pastor La Purisima. I accepted the assignment with the mutual understanding that the manifest unhappiness of the Hispanic community had not arisen overnight and could not be cured instantaneously. It would take some time to untie this knot.

My first pastoral decision was to unemploy the armed guard hired to “keep the peace.” I also began the typical task of putting names to faces and meeting my staff, who shared in the task of ministering to this diverse community of 4,000 parishioners.

My next decision was to declare a pastoral amnesty and a new beginning for everyone in the parish. The war was over between the different language groups and everyone had won. There would no longer be any in groups or out groups or welcomed or unwelcomed people. Anyone seeking the Lord would be welcome. Access to parish facilities and involvement in Masses was open to all. Meanwhile, I refused to assign blame for the conflicts, instead focusing on parishioners’ experiences.

Three weeks later, just as I thought things were settling down, 30 families picketing in front of the church surprised me. Armed with a thermos of coffee, some paper cups, and a trembling heart, I headed out to the sidewalk. Surprised and startled, they eventually took me up on the coffee, but hesitated on my offer to speak with them in my office regarding their concerns. Eventually my pastoral mantra became, “You can serve at the altar or continue protesting in the street; you are free to choose one or the other.”

I spent the next three years trying to figure out how the Hispanic community, the very community that founded this parish, could become so alienated and feel completely like outsiders in their own parish. Along the way, I puzzled over how to achieve greater harmony and collaboration between the Spanish-, English-, and Vietnamese-speaking communities. It became obvious early on that each language community and ministry were living comfortably in their own silos. Parallel and tangential community life is easier to manage in some ways.

The first step to integrate a parish and create a fair distribution of resources is to have the desire for unity in less than a superficial manner. This was the challenge into which I poured my heart and skills.

I proceeded to make some changes that, while small, ended up having a huge influence on the culture of the parish.

The first morning I arrived I was struck by the number of signs on the plaza: nine in total. Affixed to the church, in two languages, were the words “No Loitering” and “Restrooms are not for public use.” My initial thought revolved around the words’ irony: How odd to tell people they can’t congregate in the parish’s plaza. And if people do gather, don’t expect them to use the restrooms. Doesn’t that already limit our options for hospitality? I began inquiring at the Sunday liturgies, “What do you think those signs are meant to convey?”

I also noted small metal signs in various planters around the parking lot with an arrow pointing toward the parish office. Besides being too small to be useful, these were only in English.

I called two friends to help beautify the campus. We started with the 30-foot gates that closed off the promenade from the street. While I came to understand the English-speaking community’s fears about “bad things happening,” although they never had, we began to keep the gates open, which in turn began inviting people into the parish.

Close to the church’s entry is a bus stop with a large fire hydrant. The hydrant has several worn marks caused by tired people sitting on it while waiting for the bus. One of my friends, an architect, created stools that allowed passengers to wait in the shade and converse before the bus arrived. It was a small gesture from the parish to indicate: Yes, we see you and you are welcome here.

Another friend, this one an artist, helped us with new signage and paint. We created a new mantra: If it’s worth announcing, it’s worth announcing in all three of our languages. We attached an inexpensive “wild west” frontage board to the office’s facade. We distinguished buildings through different color schemes to make the entire campus user-friendly. After two years, each building on the plaza has a distinct appearance, while the classic white appearance of our mission-style church remains. We also placed inexpensive patio chairs around the plaza. Sometimes the cushions are ruffled by people sleeping on them, but mostly people pause, rest, and engage in conversation.

One of the most acrimonious battles involved access to the parish playground. A series of fences and gates blocks the school from the rest of the church property. While sensitive to the protection of kids during school hours, I asked our principal if we could leave the pedestrian gate open after school hours. She agreed and bravely fought off the few but highly vociferous parents who objected.

Since opening the gates, we now have religious education families using the grass field for soccer practice before class—allowing the kids to burn off some energy before studying the Good News. Parents who live in the crowded apartments immediately around the parish now have a safe place for their children to play. Today the joyful sound of children laughing and playing is constantly in the background.

When I arrived at La Purisima the weekly Mass schedule was apportioned thus: 10 liturgies in English, one in Vietnamese, and one in Spanish. Our community is 75 percent working-class Mexican Americans, 5 percent elderly Vietnamese immigrants, and the remainder are white English-speaking Americans of various origins. While I felt this schedule to be one of the most egregious examples of injustice in the parish, I delayed the change in the hope that I could bring the white English-speaking community into a greater awareness of the inequality and stir in them a desire to redress this wrong. That was not to be.

I kept inquiring to anyone who would listen, “Doesn’t this seem out of balance and unfair?” I took various polls while also offering multiple options until a consensus was reached—four Masses in English, four in Spanish, and two in Vietnamese each week. While many Spanish-speaking parishioners will attend daily liturgy in English, the English-speaking crowd voted with their feet and left for a nearby parish. Even when we projected the scriptures in the opposite language on large screens and offered multilingual prayers of the faithful, many were uncomfortable and unwilling to remain part of the parish family.

Attendance by the English-language community may be down, but participation at the Vietnamese- and Spanish-speaking Masses has increased. One of the great examples of leadership came from Deacon Tony Bube, who, at the age of 94, learned his parts in Spanish and is now a fixture at the 6:30 a.m. Spanish liturgies.

I discovered that the group of volunteers who lock and unlock the parish did not include a single Spanish-speaking person. Today, more than half the team speaks Spanish. Closing time for parish meetings is no longer an inflexible 9 p.m. curfew. Each ministry is trusted and receives a key simply by asking for it.

If sacraments are spiritual signs that reveal an inner truth and beauty, then our physical appearance should also reveal our community’s spiritual roots. To an immigrant community, many of whom are undocumented, a church fence, a locked playground, or an English-only room-use form is intimidating. They don’t say, “Come to me who are weary and burdened and I will refresh you.” If our sense of order and rules prioritizes legalism before welcome, redemption, and forgiveness, then we fail as a community of Jesus. When the big questions in the mind of those entering the parish office are “How much will this sacrament cost?” or “How hard will it be for me to attend without babysitting being offered?” then we have obscured the sign-value of our sacramental life.

Today murals grace the entry and the side street of the parish school, proclaiming in three languages that all are welcome. The furor over adding the phrase para los niños to the La Purisima School sign has diminished, and Eagle Scouts are working to add a raised herb garden in front of it.

I am pained by those who have withdrawn from the parish. But those who have stayed and those who are returning hearten me. I am convinced we are on the right path. I believe we are getting stronger in our unity and shared life and mission. I love the challenge to engage this parish dynamically and justly and in a culturally sensitive manner. Today at La Purisima we are mostly at peace and the poor are always welcomed, as I continue to untie a motley assortment of wet pastoral knots.

Father Bill Barman has been the pastor of La Purisima Church in Orange, California, since 2013. He has worked in parish ministry since his ordination in 1981.