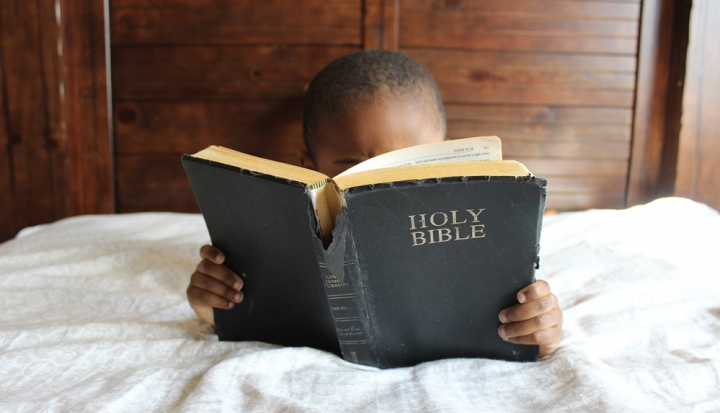 Have you ever listened to the Gospel of Mark? A few years ago, I had the pleasure of seeing Jesuit Father George Drance perform *mark in New York City. On stage, Drance recreates the experience of the underground church reciting the Gospel of Mark in the years after the death of Jesus. Before the gospels were written down, they were retold among the early followers of Christ. Under the persona of a street artist, Father Drance performs a story normally so well-known that it is easy to be complacent when hearing it in a more traditional setting.

My friend and I decided to go on a whim. It almost sounds like the beginning of a joke: a campus minister and a theologian follow fish drawn in chalk on the sidewalk, looking for a tiny experimental theater to see the Gospel of Mark performed. An hour later, we found ourselves completely captivated and on the edge of our seats as Peter denies Jesus and the male disciples all flee. Spoiler alert: The play ends abruptly after Jesus rises from the dead and appears to Mary Magdalene.

As Drance’s character disappeared into the darkness, his words written in chalk, I experienced a deeper sense of fire and longing.

Revisiting stories as we search for our humanity and deeper truths is in part what Christians do each Sunday as we listen to the gospel. We know the story; we know the characters and the ending. It is easy then to tune out when we hear the young scholar of the law ask Jesus, “And who is my neighbor?” We think we know the Good Samaritan and what he teaches us. Yet it is easier to follow the example of the Pharisee and Levite in that story. Complacent, we stop listening and keep walking. When we stop listening to the story, we stop hearing the good news.

Seeing and hearing *mark  performed, I was pulled into the narrative of the gospel anew. It was one of the most profound spiritual experiences of my life. I felt Jesus’ frustration at these men who, despite all of his examples and stories, still just don’t get it. Jesus was keenly aware of the pedagogical power of stories and parables. So, too, the gospel writers and editors invite us into a narrative that is at once theirs and ours. It is an invitation into the story. It is also an invitation into the deep humanity of the disciples.

On Palm Sunday this year my pastor challenged us to “lean in” to the passion narrative and search for ourselves in the narrative. As we once again ventured into the well-known story of Holy Week, in retelling the story we hear things that were previously merely a whisper.

In the weeks and months since, I find myself coming back to this call to lean in to the gospel. What does it mean? This semester the road to Jericho has been the Grand Central Parkway service road. In the chaos of commuter traffic, morning after morning is a homeless man who holds a sign that reads, “Anything Helps.” Each morning I see him my heart breaks anew at his desperate vulnerability, exposed on what is not quite a sidewalk, and reliant on the kindness of traffic patterns.

During Lent Pope Francis urged Christians to give without judgment to homeless persons we encounter rather than be be concerned with what they will do with the money. He was quite specific: Compassion requires that we stop, look the people in the eyes, shake their hands, and give what we can. And herein we not only lean in to the gospel but are drawn into the parable of the Good Samaritan. The story comes to life in a fully human encounter.

Listening to the gospel requires seeing this man. And as I catch his eye, slowing down as much as possible, I look him in the eye, share what I can, and wish him well. In listening, we rediscover our shared humanity, the good news, and the face of Christ.