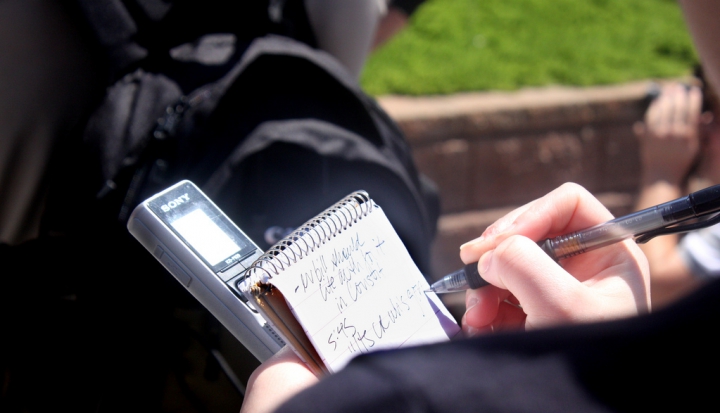 The November night I dedicated my life to Christ—the night I let go—was the night I devoted myself to my career. Faith and craft became one. Standing on a rooftop in San Salvador, El Salvador, the events of the previous few months fell in line. Their meanings creating a clear arrow pointing to my vocation: journalist.

Several months earlier, I learned of a man who changed my life. James Foley, a fellow Marquette University alum, was murdered on August 19, 2014 by the so-called Islamic State in a video seen around the world. I never met Mr. Foley, but hearing stories about him from his family and friends opened my mind to journalism’s power to fight for social justice.

Mr. Foley was a conflict reporter in the Middle East. He gave his life telling the stories of those caught in war. In 2011, he was captured in Libya and held for 44 days but returned to the region in 2012 to cover the Syrian civil war. He went to document the lives of those caught in conflict. Describing his decision, Mr. Foley said, “I need to go back because the world needs to know the plight of people who are being walked on like grass underfoot.” His willingness to walk headfirst toward risk opened my heart to using my love of storytelling for a career aimed at more than personal success.

Three months later, I walked off the plane in El Salvador to commemorate the 25th anniversary of the Jesuit martyrs at the Universidad Centroamericana. The week spent learning the history of the Salvadoran civil war and the Jesuit ministry there underlined the need for truth in a world of malicious illusion. World powers supported an oppressive regime during the war because the stories of what was occurring on the ground in El Salvador—the countless attacks on innocent civilians—never reached international audiences.

Again, “the world needs to know the plight of people who are being walked on like grass underfoot,” Foley said. Or, as it is detailed in my favorite Bible verse, Proverbs 31:8: “Speak up for those who cannot speak for themselves, for the rights of all who are destitute.”

Today, I am a human rights journalist. I cover stories about social justice. I work to show the reality of those who society ignores and suppresses. Talking with former heroin addicts, gang members, or families living in substandard housing is not a personal measure of courage or a kind of voyeuristic endeavor from my socioeconomic privilege. These are the people Jesus sought in his ministry. They are my neighbors who are too often passed like the man on the road to Jericho. Their brokenness in sin is nothing less than a reflection of my own. I see God in their faces, and I hear God in their stories.

My career as a human rights journalist is to tell the full story—to bring to light the people and topics we have suppressed. This is my ministry.

This is part two of a three-part series of essays by journalists on why their profession is also their ministry. You can read the first essay here.