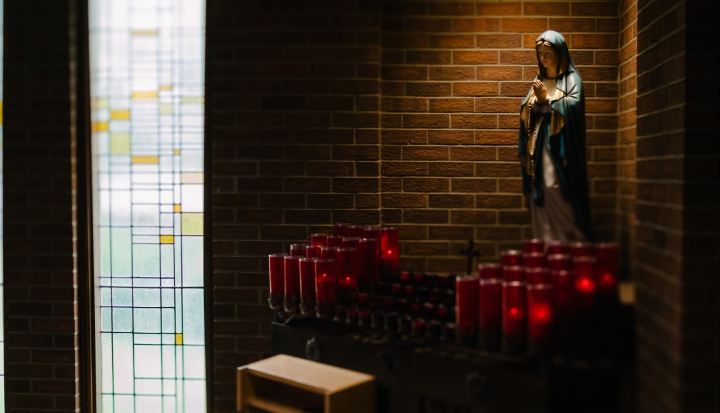 Recently a friend asked me why I was Catholic. I mumbled the first few reasons that entered my head—the faith of my family, the enticing power of the story, and increasing belief as I age that divinity indeed infuses all thing, and that Christ, dead in the dust at age 33, was indeed distilled divinity.

My friend was satisfied and moved the conversation along to other things, but I was not satisfied and so have continued to write down reasons that I am Catholic.

I believe that a carpenter’s son named Jesus did indeed crack time in half, entered this world in the guise of a squalling infant, said his piece, was slaughtered for his pains, and cracked time again on his way home. I have no real basis for this belief, and neither do you. We either believe the man or we do not, and I do, for reasons I know and do not know.

Some of those reasons I can articulate. I was born into a Catholic family and learned early to love the smoke and poetry and incantation of the Roman rite. My friends were Catholic, and we were as bound by our common faith as we were by our exuberant youth, European forebears, and itchy masculinity.

But I believe in Christ for muddier reasons. Sometimes I desperately need to lean on a God wiser and gentler than myself. Sometimes I desperately need to believe that when I die, I will not be sentenced to Fimbul, the Hell winter, where there is only the cold voice of Nothing, but rather I will be at peace and draped in Light. Sometimes I am nudged toward belief by the incredible persistence and eerie genius of the tale: the encompassing love of a Mother, the wordless strength of the Father, the Lord of All Worlds cast ashore on this one as a mewling child in dirty straw. Sometimes I am moved past reason by the muscular poetry and subtle magic of these stories. Sometimes it is an intuitive yes as the light fails and the world is lit from below.

And sometimes I simply cast my lot with the sheer bravura of such a patently brazen lie. That a man could die and live again is ridiculous; even a child knows that death is the end.

I do not want to be sure about that. I want to meet my quiet father-in-law, a man I never knew, and thank him for the lovely miracle of his last daughter. I want to meet my brother, Jimmy, who died in his carriage on a bright April day in 1947. I want to meet William Blake, Dexter Gordon, Crazy Horse. I want to kiss my grandmother again on her leathery cheek. I would like to see my friend Dennis Green, age 23, who died on a humid highway in Florida while I was writing these words. I would like to meet this fellow Christ, who haunts the edges of my dreams, who flits from tree to tree in the forest through which I make my way. I would like to live forever and hold my wife and daughter and twin sons in my arms until the end of time and daily read the immense poem of Death Into Life and grin at the whirl and swirl of its endless unfolding, until the end of until.

It is a house that needs cleaning, a house in which savagery and cowardice have thrived, where evil has a room with a view, where foolishness and greed have prominent places at the table. But it is also a house where hope lives, and hope is the greatest of mercies, the most enduring of gifts, the most nutritious of foods. Hope is what we drink from the odd story of the carpenter’s odd son. When we eat his body in the ludicrous miracle of the Mass, we hope in him, and with him, forever and ever, world without end, amen, amen, amen.

This article was originally published in the August 1996 issue of U.S. Catholic.