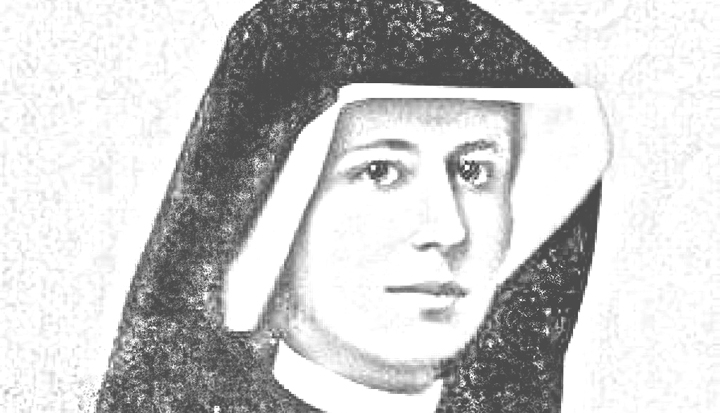 Often during Mass, I see the Lord in my soul; I feel His presence which pervades my being. I sense His divine gaze; I have long talks with Him without saying a word; I know what His divine heart desires, and I always do what will please Him the most. I love him to distraction, and I feel that I am being loved by God. At those times, when I meet with God deep within myself, I feel so happy that I do not know how to express it. Such moments are short, for the soul could not bear it long,  as separation from the body would be inevitable. Though these moments are very short, their power, however, which is transmitted to the soul, remains with it for a very long time. Without the least effort, I experience the profound recollection which then envelopes me – and it does not diminish even if I talk with people nor does it interfere with the performance of my duties. I feel the constant presence of God without any effort of my soul. I know that I am united with Him as closely as a drop of water is united with the bottomless ocean.

It is due to St. Faustina Kowalska’s spiritual conversations with Christ—recorded in her 600-page diary—that Catholics all over the world celebrate the Sunday after Easter as the Feast of Divine Mercy. It is because of her that we pray the Divine Mercy chaplet on rosary beads and look to the image of Divine Mercy for inspiration.

St. Faustina was born to a low-income family; chose to live a simple life of hard labor, prayer, and self-denial as a Sister of Our Lady of Mercy; and died at the age of 33. But her interior life was filled with passionate devotion and joy. “I want to be a thurible filled with hidden fire, and may the smoke rising you to You, O Living Host, be pleasing to you,” Faustina wrote in her diary. “I feel in my own heart that every little sacrifice arouses the fire of my love for You, but in such a silent and secret way that no one will detect it.”

I first learned of St. Faustina Kowalska when I was a teenager growing up in Buffalo, New York. After a wave of church closings, the beautiful St. Luke’s, where my grandmother was baptized and married, was up for sale. Feeling a call to mercy, two Buffalonians—a restaurant owner named Amy Betros and a cancer researcher named Norm Paolini—decided to buy the building and transform it into a mission serving Buffalo’s poorest, most marginalized people.

Since 1994 St. Luke’s Mission of Mercy has opened its doors to all in need of food, shelter, companionship, and spiritual guidance. The church still houses an image of the Divine Mercy, a painting of Jesus with two rays of light emerging from his heart, and St. Faustina is the mission’s unofficial patron.

Over the years I have spent many Good Fridays walking in St. Luke’s yearly procession through the neighborhood, stopping at houses along the way to say a version of the rosary based on Faustina’s diary. After years of hearing those same excerpts, I decided to read her writings in their entirety.

My initial reaction to Faustina’s words was mixed. I was perplexed when I read of her ascetic practices, such as wearing a hairshirt or drastically limiting her food intake. It is hard to imagine leading the life she did. Moreover, our society leaves little room for the kind of visionary mysticism Faustina experienced.

Even during Faustina’s time few understood her religious experience. Many of her sisters questioned her frequent illnesses, wondering if she was feigning them in order to avoid manual labor. They also doubted the verity of her visions.

If Faustina were alive today, it is likely that her visions and conversations with Christ would be labeled hallucinations; she would be hospitalized and perhaps prescribed a strong SSRI. If she failed the psychological assessment many of today’s religious orders require, perhaps she would not have been allowed to enter religious life at all.

Having volunteered in a mental health hospital and cared for a loved one with psychosis, I have learned that the benchmark of one’s mental health is an ability to function in society. Under our current capitalist system, this means being able to hold down a job and care for oneself.

But what if the society, rather than the individual, is ill?

This was certainly true of the times Faustina lived in, and she knew it. Although she never mentions Nazi Germany by name in her diary, she does express concern for Spain and communist Russia, countries that have abandoned God, and feels the need to pray constantly for Poland. Though she did not live to experience World War II, she seems to have had a strong premonition of it, feeling a need to spread the message of mercy before God returned in harsh judgment.

Moreover, some of her visions seem to prefigure Hitler’s invasion of her country and the Holocaust. In 1937, she wrote, “Today, I saw how the liturgical mysteries were being celebrated without liturgical vestments in private homes, because of a passing storm; and I saw the sun come out from the Blessed Sacrament, and all the other lights went out, or rather, they were dimmed; and all the people were looking toward this [one] light.” While she claimed not to know the meaning of this vision, some later came to see it as prefiguring the Nazi occupation, when Mass was celebrated secretly in private homes and eventually in concentration camps.

Unfortunately, the profundities of human cruelty made manifest during World War II still exist. Even those of us fortunate enough to live in countries where an authoritarian regime does not regularly assault our dignity still live and depend on systems that are inherently unjust and oppressive. It is no surprise to me that mental health issues are rampant in the wealthy countries of the world. While we enjoy a high level of luxury, we also suffer a large degree of stress. The social bonds that once held us together—family, religion, civil society—are no longer as tight. Loneliness and isolation are rampant; fear is on the rise. Our society is indeed ill.

Well aware of the harsh reality her world was facing, Faustina was plagued by doubt and sometimes despair, but again and again she felt called to communicate God’s message of mercy, to be a “secretary” and faithfully write down all that God told her.

“From all My sounds, like from streams, mercy flows for souls, but the wound in My heart is the fountain of unfathomable mercy. From this fountain spring all graces for souls. The flames of compassion burn Me. I desire greatly to pour them out upon souls. Speak to the whole world about My mercy,” she writes. This is the message that Pope Francis took up in declaring 2016 a Year of Mercy.

We, living in a century that so far looks not much better than Faustina’s, are called to the same mercy. Let us find strength in the chaplet, in the image of Divine Mercy, in the Feast of Mercy on the Sunday after Easter. Let us maintain, like Faustina, a conviction that death implies resurrection and that judgment will be tempered with mercy.