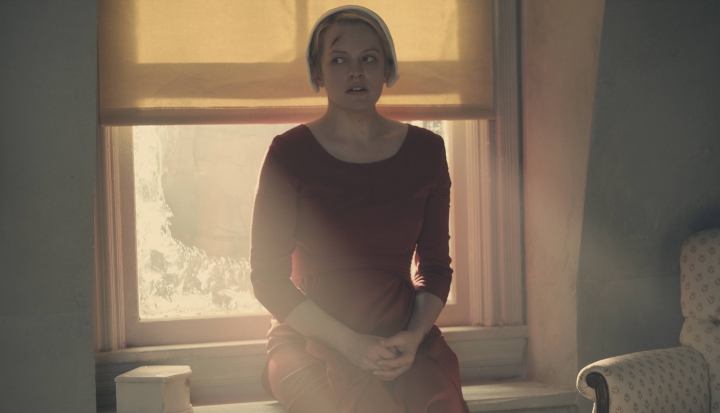 What if you woke up one morning and everything and everyone you knew and loved was gone? What if it happened slowly over time? In Hulu’s new series The Handmaid’s Tale, based on the 1986 book by Margaret Atwood, this is the situation in which protagonist Offred (Elizabeth Moss) finds herself. She goes to sleep in the United States of America and wakes up in the Republic of Gilead, an oppressive regime based on the perversion of scripture and patriarchy taken to the extreme. A world where the bodies of women are used and discarded, exploited much like the land and water Gilead’s people have destroyed.

Reading the book and watching the series, one can’t help but wonder why all of this happened. What drove an entire society from freedom to oppression? While the direct events leading to a society based on female enslavement happened in a quick, concerted effort, the undoing of pre-Gilead society occurred slowly, with many warning signs along the path. Yet the cries of the polluted and degraded environment were largely ignored until a crisis occurred that threatened to end society.

In Gilead, women have no rights over their lives or their bodies. Every effort is taken to erase the identities of women forced into reproductive slavery, the Handmaids. These women, who are presumed fertile and who have had children in the past, are given to households of the powerful to serve as surrogates for infertile couples. In Gilead, infertility is a crisis of epic proportions for various reasons, most caused by environmental damage. Yet this is not your typical fertility clinic experience. Instead, these women have forced intercourse with the Commanders they serve while lying between the knees of the Commanders’ wives. This practice, intended to bring forth children, is based on the Old Testament story of Rachel, who forced her handmaid Bilhah to have sex with her husband Jacob and who then claimed the children as her own.

Atwood and the show’s writers deftly leave us breadcrumbs to understand how this happened, the main catalyst being sharply declining birth rates and rampant infertility. The audience comes to understand that we are currently living in the pre-Gilead society. While contraception and abortion cause some of the declining birth rates, it is environmental toxins, pollutants, and a super strain of syphilis that resulted in Gilead’s widespread infertility

Thus those women who remain fertile are, as Atwood writes in the book, “a national resource,” and their flesh becomes a commodity given to the wealthy and powerful. The fact that many of the Commanders themselves are infertile is never discussed. In fact, it is illegal to say that a man could be sterile. It is only women who are fertile or barren. Handmaids have three chances to carry a pregnancy to term before they are declared Unwomen, their flesh becoming worthless, their “service” no longer needed.

Birth defects, stillbirth, and miscarriage are common in Gilead—so common that Handmaids are told 1 in 4 pregnancies will end this way. Babies born with defects caused by toxins in the air and water are declared Unbabies and quietly disposed of. While abortion is illegal and punishable by death, infanticide of babies born with deformities is routine. This is no pro-life utopia.

On the other hand, those few babies who miraculously make it to birth and survive are celebrated and the Handmaids praised. At birth the child immediately becomes the property of the Commander and his wife, with the Handmaid remaining only long enough to nurse the baby for a few weeks. Like slaves, these women are removed from the home and placed with another Commander, beginning the process again—an endless loop of exploitation and reproductive bondage. The women are as voiceless as the ravaged earth with which they share so much in common.

In Gilead, a fertile woman is rare and must be controlled. She must be used over and over until there is nothing left and she is disposed of, a commodity no longer worth her keep. In this, the Handmaids are treated much the same way the earth is treated, both in the pre-Gilead society and in our current world. The earth, with its possibilities and resources, is treated as a commodity to be used over and over until nothing or very little remains.

Yet for all our language of dominion, our posture of ownership and abuse masquerading as progress, we cannot separate our flourishing from the flourishing of our common home. Nowhere is this fact more plainly seen than in the way destruction of the environment has led to destruction of bodies in Gilead. Disrespect, commodification, and exploitation of the environment through dumping toxic waste, pollution caused by careless business practices, and contamination of soil and water by chemicals and pesticides all contribute to an imploding of fertility. This ultimately leads to the disrespect, commodification, and exploitation of humans—specifically female bodies. Exploitation of the sacred environment with which we are inexorably linked will always end with the exploitation of sacred human bodies.

Care for creation is one of the bedrocks of Catholic social teaching. Being in right relationship with creation is a necessary component of living God’s justice, a call all receive at their initiation into the faith. Pope Francis has put flesh on the bones of this principle to care for our one and only home. He says in Laudato Si’ that “a true ecological approach always becomes a social approach” that “must integrate questions of justice in debates on the environment, to hear both the cry of the earth and the cry of the poor.”

In Gilead, the earth was voiceless for so long that its destruction occurred under people’s noses—a quiet, steady trickle became an unstoppable flood. In the minds of the powerful, the next logical step after catastrophe was not to radically alter their behavior to restore balance and maintain right relationships. Instead they continued to grasp for control, turning the same model of exploitation and commodification to the women of Gilead, stripping them of their dignity and agency and turning them into passive objects to be used and discarded. In other words, once the earth could no longer be silently used and discarded, could no longer support their way of life, society turned to the use and abuse of people. Certainly, the Handmaids of Gilead are “the poor” in this story. No one hears their voices, just as no one heard the cry of the earth as it was ravaged.

Margaret Atwood, in interviews over the years, maintains that there is nothing in The Handmaid’s Tale that didn’t occur somewhere at some time. Perhaps that’s what makes it so terrifying, sending shivers down the spines of women everywhere.

We in this time and place would be wise to learn the lessons of The Handmaid’s Tale and of our faith. True care for creation—being in right relationship with the earth God created—is not optional. It is integral to living our baptismal call. Exploitation of the environment will always end with exploitation of bodies, but by tapping the richness of our faith we can act to prevent Atwood’s dystopia from becoming our nightmare.

Sarah Margaret Babbs writes on peace and justice, parent loss, and hope in suffering on her blog Fumbling Toward Grace. She lives in Carmel, Indiana with her husband and three children.