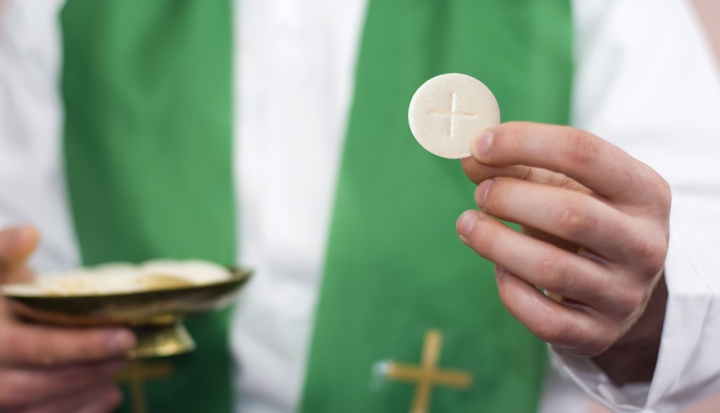 My three teenage daughters and I sat on jackets on the sidewalk. We were part of a much larger human jigsaw puzzle, one that morphed every few minutes from sitting to standing to kneeling on the sandpapery concrete in front of a Subway in downtown Philadelphia.

We couldn’t see the altar except on the jumbotron, but no one hesitated saying the response: “Lord I am not worthy that you should enter under my roof, but only say the word and my soul shall be healed.”

Then on the screen we saw it: a pearly strand cascading from a massive stage and dispersing into the throng, each bead a priest or deacon in cream vestments. The necklace unfurled gradually along both sides of the wide thoroughfare, a moving knot that deposited one priest carrying the Eucharist along with an escort bearing an umbrella, and then another pair, and so on for miles.

As we watched this spectacle on the screen, the procession was no longer virtual but visible on the street in front of us. Just one minister left. “They are going to make it here!” someone exclaimed.

Soon pilgrims were pressing nearer the barricades, reaching out their hands plaintively as they realized they would be the last in the million-strong crowd to be offered communion. Young and old waved, called out, pleaded, “Here! Here!”

I watched my fellow Catholics begging to be fed, longing for holy communion as I do every Mass. As the last priest came to the curb to distribute the Eucharist, several recipients dropped to their knees on the spot. One family even carried a handicapped woman to the barricade so she would not be left out. My two older daughters consumed hosts blessed by Pope Francis. As we reclaimed our little square of sidewalk to stanzas of “One Bread, One Body,” I saw a 30-something-year-old woman from New Jersey sobbing, a man from California dabbing his eyes.

I was emotional, too, but my tears welled from both joy and sadness. My youngest daughter and I were unable to receive holy communion at that Mass because we have celiac disease. We cannot consume traditional hosts.

Sufferers of celiac disease aren’t allergic to wheat but have an autoimmune response to it. Our small intestines are unable to absorb nutrients when we consume food with wheat—or even food that has come in contact with wheat. There are now four distributors approved by the Roman Catholic Church that offer low-gluten hosts that are safe for our gluten-free diet—at present the only therapy for the disease. (Wheat is a requirement for the hosts, which is why they’re low-gluten rather than gluten-free.) We are only able to experience communion through the sacrament when a church uses hosts from these distributors. But in our experience only a few churches do.

Despite the United States Conference of Catholic Bishops’ recommendation that parishes should strive to “ ‘normalize’ the practice for the communicants,” in our experience, receiving low-gluten hosts at communion is anything but normal.

My daughter and I joke about our weekly “sacramental scavenger hunt.” We arrive before Mass and set aside our low-gluten hosts that we’ve purchased on our own in a pyx—a small container usually for hosts to be taken to the sick. We must pay attention to where our pastor decides to distribute these hosts and follow him, even if it means crawling over others in the pew and cutting into a different line. The return trip is trickier, as we weave around eucharistic ministers, other communicants, and those already kneeling in prayer in our pew when we return.

If the celebrant is a visiting priest, things get even trickier. Once when our bishop was presiding at Mass, I knew to position myself in a pew near the front so I could keep an eye on my pyx throughout the consecration of the Eucharist.

Will he forget to return the pyx to the ciborium with the other hosts for distribution I wondered? Might someone open the pyx and dump my low-gluten host in with the rest, meaning I would be sick from cross-contamination? Would he forgo the pyx and hold the host in one hand while distributing other hosts, thereby cross-contaminating mine? Pyx, pyx, who has the pyx? My daughter and I have seen all these scenarios.

At that Mass I lost track of my pyx. Apparently the bishop did too. I put myself in his line, but after my reverential bow, I saw no pyx in his bowl. I asked for a low-gluten host but immediately read his confusion. Rather than hold up the line, I returned to my seat. Even after Mass the lay ministers could not find my pyx. It did not show up until the following week, meaning that a consecrated host was abandoned somewhere behind the altar for days. When I finally found it I consumed it on the spot.

There are times we attend Mass at different churches around the country for funerals, first sacraments, or Sundays and holy days when traveling. Spiritual communion—not physical via the bread of life—is the norm in most of these situations. Once at Mass in South Carolina an usher told us we’d find a minister distributing low-gluten hosts at the side altar. My daughter and I played the scavenger hunt but found no special minister and returned to our seats. The well-meaning usher saw the hubbub and insisted we try again after all other communicants had returned to their pews. I obliged and dragged my dying-of-embarrassment, then-8-year-old daughter up the aisle as the congregation stared.

Seeing the humor in our quest for communion helps, but best of all is a prayerful effort to see these barriers to physical holy communion as a resurrection, not a cross. No longer do I take the precious gift of bread for granted. I have become an “extraordinary minister” of communion, both a meaningful ministry and practical solution. I am the first to drink from the chalice that I distribute so do not have to worry about cross-contamination. I am also now a regular eucharistic adorer. In the adoration chapel I routinely experience Christ without a morsel or drop passing my lips.

During adoration I often read from a collection of reflections that reminds me of how rarely Catholics in the early church received physical communion—sometimes only once per year. St. Clare would therefore experience intense veneration when she did partake of the Eucharist.

So now when I cannot receive physical holy communion at Mass, I recall the tears of my fellow Catholics in Philadelphia who begged for Christ in the form of bread. They became so much more than mere receptacles for the host. I give thanks from the depth of my soul for every physical communion I have been blessed to receive and vow to put on Christ every time I am infused with his love through his body. And like St. Clare, I venerate him over heaven and earth.