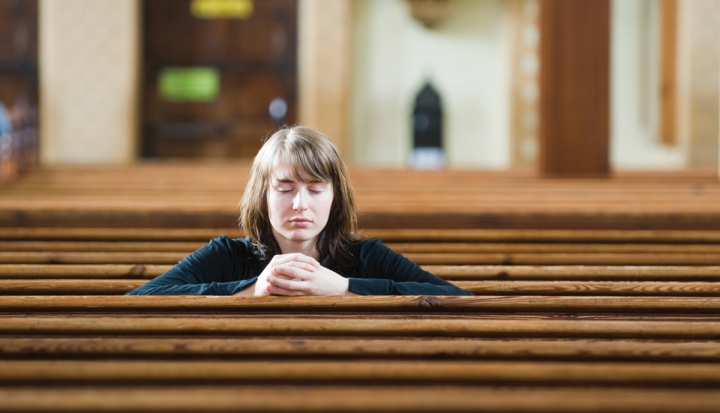 Katie was raised Catholic but did not begin taking her faith seriously until college, largely thanks to the influence of an excellent campus ministry program. She has remained close to her college friends, and her faith has grown in her young adulthood. She is an active member of her parish and tries to make daily Mass a couple of times each week.

Lately Katie has been dealing with something peculiar. It started with a morning that she brushed her teeth just before leaving for Mass. During Mass she could not shake the feeling that she had broken the precommunion fast. She later started worrying that her flavored lip gloss was also a violation of the fast. She now wears nothing on her lips to Mass. Reconciliation is another problem. One weekend, she went to confession three separate times.

When Katie mentions these things to her friends, at first they praise her desire to be reverent. But as instances like these continue, they respond with increasing annoyance at her perceived efforts to be “holier than the pope.” Sensing their irritation, Katie has stopped telling them about her doubts but feels increasingly more isolated and insecure.

Scrupulosity, what Katie suffers from, refers to a disposition of seeing sin all over one’s life. A scrupulous person agonizes over the details of church teaching and strives to conform to the letter of the law. When nuance or ambiguity is present in church teaching, a scrupulous person usually chooses the most difficult path of obedience, “just to be on the safe side.”

The condition causes suffering. Peace is elusive. At its most extreme, scrupulosity may actually be a form of Obsessive-Compulsive Disorder. It can be highly debilitating, though many people experience less pathological manifestations of scrupulosity. Sufferers describe obsessive “thoughts that cannot be shaken” about sin, guilt, and worthlessness that no amount of logical reasoning can overcome.

We may be tempted to dismiss Katie’s scrupulosity as mere overzealous piety, but this is a mistake. Piety emerges from a deep filial affection for God. Authentic piety fills us with enthusiasm and joy. Scrupulous behaviors, on the other hand, emerge from and perpetuate feelings of fear and insecurity—feelings that the scrupulous person mistakes for God.

Nor is scrupulosity a mere “tender conscience.” Conscience, in the Catholic tradition, is “the most secret core and sanctuary” of a person where she “is alone with God.” A scrupulous individual is ­compelled more by a sick conscience less attuned to the loving guidance of God.

Since 1964 the Redemptorist order has ministered specifically to those suffering from scrupulosity, primarily through the organization Scrupulous Anonymous (SA), which hosts retreats and publishes a newsletter with resources for overcoming scrupulosity. It’s written by Redemptorist Father Thomas Santa, author of Understanding Scrupulosity (Liguori).

Scrupulosity is found in all denominations, and Father Santa insists that Catholicism does not cause scrupulosity. Though we may be tempted to think scrupulosity is increasingly rare as the Catholic Church places less emphasis on rules and regulations, Father Santa insists the problem may be growing. Monthly subscriptions to his newsletter are up, and SA correspondents are people of all ages, including young adults like Katie.

Treating scrupulosity is difficult precisely because it is so tied up with the practice of religion. Scrupulous people are encouraged to find a spiritual director familiar with scrupulosity and commit to obeying their director’s recommendations even in the face of doubt. It is also imperative that clergy and other parish leaders know the signs of scrupulosity and what resources are available to help those who suffer. Scrupulosity is a daily challenge, but with the support of both an individual confessor and a well-informed parish community, those suffering can find the resources they need to live the faith and experience the tender mercy of a God who loves them.

TagsHealth and wellness The Examined Life