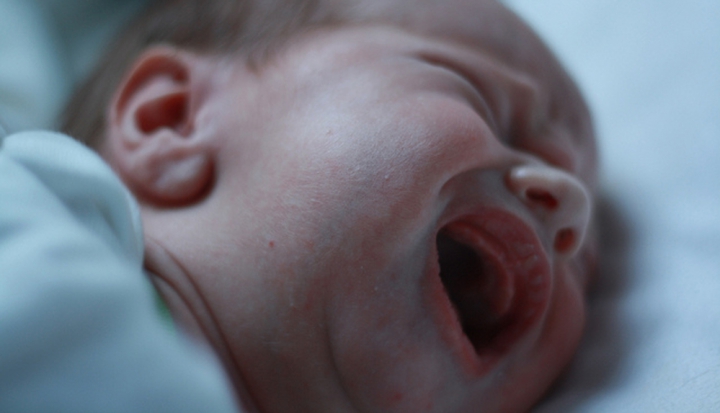 The host is raised upstairs, at least I imagine it is. I’m not in the sanctuary. Instead, I’m in a basement room, where the wires in the ceiling lead to a speaker box in the corner of the room. From that box sounds the blessing of the simple bread and the feast of the body and blood of Christ. The boy sitting at the table below the box holds out his Lego sculpture, and his mother says, “Isaiah, are you showing her your dinosaur?”

My daughter squirms toward the Lego dinosaur. If eyes had the power to fulfill their desires, that sculpture would already be in pieces. I try to focus on the voice of the priest and kneel internally but cannot. My mind has fallen asleep in the Garden of Gethsemane.

This isn’t our home parish, and perhaps the pre-Mass announcement about the location of the cry room in the church basement was not directed at us. But it felt like a personal instruction. A young mother with two children under the age of 3, I am used to the restlessness of morning Mass. My toddler can entertain himself quietly, and if we sit close to the front of church he will kneel next to me and fold his hands. My 1-year-old daughter, however, has entered the squirmy stage and is not happy unless she is standing, waving, and chatting at the parishioners around us. When she starts fussing in this unfamiliar parish, I feel the eyes of the multitude upon me. I remember the instructions and make my way to the basement. I am not alone there, and I am also not praying.

In the next few years our small home church may be undergoing major renovation for the first time in its history, and as we add a parish center we will discuss the possibility of cry rooms. Currently, we don’t have a dedicated space for calming children, only a single hallway in the back of our early 20th-century church. Sometimes the change of scenery is enough to settle a child, but the congregation can still hear fussing babies and tantruming toddlers. I’ve known some young families so nervous about being a disruption that they decide to either attend Mass in shifts by leaving a parent home with the young child or not go at all. The parents cannot pray or the people around them get distracted or the children end up in tears. Our parish, the only Catholic church in a small town and partnered with a Catholic grade school, has many families with small children, but many stay home until the children are 4, 5, or 6 and have already started attending with their school classes.

“When I was a child, I spoke like a child, I thought like a child, I reasoned like a child,” says Paul in 1 Corinthians 13:11. I was raised in a parish without a cry room. Some of my earliest memories are at Mass, squinting up at the lights on the cathedral ceiling and pretending to squish them between my fingers. I tied knots in the hymnal ribbon, made triangles with my fingers and played search-and-find games around the church.

For every disapproving look toward a young family with a squawking baby, there are three mumbled conversations in the narthex about young people’s drop in Mass attendance. There’s an old saying, “Your parish is dying if no baby is crying,” and, anecdotally, that seems to be true. According to the Pew Research Center, the share of the population that identifies as Catholic fell from 23.9 percent in 2007 to 20.8 percent in 2014, and the drop is most notable among people under 50.

Families should feel welcome to attend Mass together, but I understand the appeal of a cry room. A friend of mine has a son whose autism means he sometimes needs an environment without too many distractions. She finds she can pray better when at church but away from the pew. Another friend is a nursing mother who is shy about nursing in public, even with a cover.

Cry rooms can be useful. But some things about them still bother me, and I don’t think I’m alone. If my parish does decide to implement one in our new construction, I hope we’ll consider three things.

First, cry rooms shouldn’t be an overflow space for Mass. One father, posting on an online forum, said that he gave up bringing his young children to Mass because when he brought them to the cry room, he would receive a host of disapproving stares from adults who had entered the church late and were using the room to avoid arriving late in the chapel.

Second, cry rooms should be as close to the action as possible. In many modern churches, the cry room is a glass-walled space at the back of the nave. Even though being behind a glass wall can make some parents feel like they are in a jelly jar, at least kids and their guardians can participate in the liturgy. Being close to the “action” also means treating the space as much like the pew as possible: limited toys, snacks only for babies, and working toward paying attention.

Finally, cry rooms should not be the expectation for families with young children. The pre-Mass announcement that my family heard on the Sunday we attended a different parish, while informative, laid the foundation for more young families giving up at the first sniffs of a tantrum before trying to see if we can all celebrate the Eucharist together. In Amoris Laetitia (The Joy of Love), Pope Francis writes that children are the “living stones” of the family and emphasizes the need for parents to focus on their children’s religious education. While parents are the first teachers, the most important experience we can provide our children is the Mass. When we are in our home parish, I get more positive remarks from fellow parishioners than admonishments. “What a beautiful family you have,” says the mother of two teenagers behind us. “What a spirited baby. She’ll be a singer,” says the older man in front of us.

It reminds me of one of the reasons I felt called to Catholic parenthood. My husband and I always attended Mass together while we were dating and engaged, and I remember looking at the young families in the pews: A mother, cradling a baby in her lap with an arm protectively around a toddler. A father with his 4-year-old kneeling next to him, her working to fold her hands perfectly. Catholic parenthood called to me while watching families pray together, publicly. I might have been momentarily distracted from the homily by seeing a brother and sister stick their tongues out at each other, but the visible display of Catholic parenthood taught me about love, patience, and selflessness. As a parent now, I know that prayer at Mass is hard to come by most Sundays. It is not a time of reflection, but of refraction—the passing of prayer through me to my children as I hold them close and point out the raised Eucharist. I whisper in my son’s ear, “That’s the body of Christ.”

In the basement cry room, apart from my toddler and my husband, my daughter and I sit on the floor. She scoots toward the Lego dinosaur and points at it. Similarly, she points at the stained glass windows when we are in our home parish and looks at me when the sun hits them just right and shines red and orange beams down on us.

Rachel Mans McKenny is a writer, mother, and professor living in Iowa.