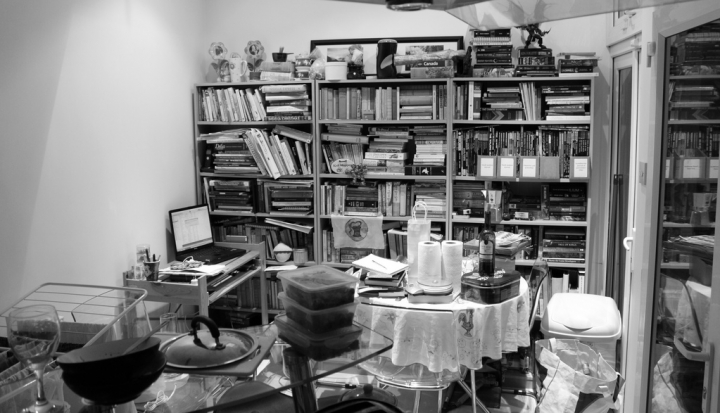 While traveling for work conferences, Deacon Joseph Ferrari heard the common phrase “make yourself at home” enough to get him thinking: What is home?

So Ferrari, a professor of psychology and St. Vincent de Paul Professor at DePaul University in Chicago, decided to take a closer look at what home means. “There’s a body of literature on what’s called ‘place attachment’—how we’re attached to places and how we identify with a place,” Ferrari says. “But I wanted to focus on the nebulous feeling you get that makes you feel at home.”

And, according to a recent study coauthored by Ferrari, a common method of “making oneself at home” is by associating with the material possessions within it. But is this a good thing? Not necessarily, Ferrari says. Left unchecked, an attachment to our possessions harms our relationships with other people and compromises the quality of our home lives. When you have a breadth of items in your home, Ferrari says, “you’re drowning in a sea of stuff.”

Ferrari coauthored the study with Catherine Roster, an associate professor of marketing at the University of New Mexico. The study, called “The Dark Side of Home: Assessing Possession ‘Clutter’ on Subjective Well-being,” was published in the Journal of Environmental Psychology and is the first study of its kind to look at how clutter impacts mental health and takes over the human experience of home or, as Ferrari calls it, the “dark side of home.”

What do you mean by the “dark side of home”?

The “dark side of home” is when home is compromised by clutter. Home should be focused on people, not on things. I like to say: don’t have relics, have relationships. Focus on the relationships that you have. The problem with possessions is that they cause us to forget about relationships and become bogged down by our stuff.

When you have a lot of clutter, home isn’t always as positive as you might think.

So home is different than a shelter?

I’ve done some conference talks with people who said, “I grew up in the military,” for example, “and home wasn’t a place for us. Home was traveling around, because every few years we would be relocated. I didn’t have a consistent place, but I felt at home.” I think that’s interesting. Because we identify with our possessions, we often feel “at home” by being with these possessions. Has home become our possessions?

What possessions qualify as clutter?

The interesting thing about clutter is to you it’s your stuff and to some-body else it’s your clutter. Clutter is often defined as an overabundance of possessions—things gone wild. The person with clutter feels overwhelmed and just can’t keep organized and efficient. This is different than hoarding. Hoarding is usually having an overabundance of one thing. Clutter is having an overwhelming amount of different things.

I have been working in the past few years with a professional declutter expert named Sue Becker. Together we give talks in local communities and parishes called, “Clutter ain’t Christian. Stuff ain’t Saintly.” As a deacon, I provide an overview of what scripture and the lives of saints teach us about living in abundance without attachment. Then Sue comes in and helps workshop attendees focus on how to organize and how to let go of nonessential items. Our experience is that attendees really enjoy the insights and the practical lessons.

Since I am also a community-social psychologist, my focus is on enhancing the lives of others and focusing on the strengths of communities and enriching them. Clinical psychology focuses on deficits—what is missing or “abnormal” in a person’s life. Community psychology flips that model and asks how we can improve the lives of the community by building on their strengths. So, in terms of clutter, I tell my students to leave the world better than they found it. Don’t focus on possessions, focus on community. I find my life as a permanent deacon intertwines with my life as a community psychologist. Both focus on social justice. Both ask, as St. Vincent de Paul would say, what must be done to improve the lives of others? And collecting clutter is just not the answer.

How does clutter get in the way of relationships?

Let’s remember, life is not about me. It’s about relationships. This is what Jesus tells us.

This is what makes the Jewish faith, the Christian faith, and the Muslim faith so important: We introduced community. It wasn’t just me and God. It was us and God. It’s now all of us.

Jesus never said, “Live in poverty.” No. He said, “Just live fine, but you don’t have to have so much.” Overabundance is the problem. Clutter tips us into having too much stuff. We identify too much with our possessions. And we should instead be identifying with each other.

People now focus more on having and holding onto things than thinking of the needs of others and giving. That’s the society we live in. People want the newest and the latest.

This gets in the way of relationships because now we’ve become competitive and more thing-oriented. A colleague of mine has been studying thing-orientation versus people-orientation. People are focusing more on things and less on people, on each other.

That’s dangerous. That scares me. That concerns me as a deacon, as a psychologist, as a person. We are losing contact with understanding the needs of other people.

I always tell people to give their things away now that they’re alive so other people can enjoy them. My parents were wise to do that. When they downsized from a house to an apartment, and now to an assisted living facility, they gave things away to us. I like that mentality. I think that’s what we ought to do for others—give of ourselves. See, we need to collect relationships, not relics, and leave a legacy of the items that best reflect our life. You can’t take it with you!

I think we’ve been conditioned to think, especially in this country, that you’ve got to have more. That it’s all about me. But life is not about me, life is about we.

What does scripture say about clutter?

There are a lot of examples in scripture that tell us, “Get rid of stuff.”

For example, we can look at the rich young man who asks Jesus how to get into heaven. The rich young man had too many possessions, Jesus told him, which aren’t what’s essential. He said: “You lack one thing: Go, sell all that you have, and give to the poor, and you will have treasure in heaven; and come, follow me.” He wanted him to have a life of giving, of service. The rich young man knew all the rules to follow, but giving up all he had to follow Christ was too difficult. He walked away sad, not mad at Jesus, but sad because he could not have it all. And Jesus said, “How difficult it will be for those who have wealth to enter the kingdom of God!”

Look at John the Baptist. He didn’t have any clutter, he leaves everything. He goes into the desert. He wears a sackcloth. John the Baptist is often depicted as something of an outlaw and a little strange. But he lived simply to prepare for something to come that was greater than himself. Jesus also told his followers to let go of their work (let the dead bury the dead) and to let go of the world that was trying to pull them down. Come, and follow Christ.

Consider St. Francis. He leaves his wealthy family and lives simply. Look at the apostles. Jesus comes up to a bunch of them, the fishermen, and says, “Leave those nets.” They drop their businesses. Some of them owned those businesses, scholars tell us. They leave their wealth. They leave their livelihood.

Look at Peter. He leaves the comfort of a boat and walks out on water because Jesus is very clear. Look at the Jews. Jesus tells them, “Leave your family obligations behind. Let the dead bury the dead. You come follow.”

We have our shows like Storage Wars and American Pickers that are all about, “How do I get wealthy from my possessions?” But what we are called to hold onto is our faith—not possessions. It’s not biblical, but Hindu monks are called after four years of formation to have two robes, one bowl, one spoon, and one set of sandals. Imagine if that is all we take with us for a family vacation trip? On a cruise? People just could not handle that. Try noticing all the items people take with them on planes these days.

Are you saying the Bible tells us to leave all our possessions behind?

Having stuff isn’t a bad thing. It’s OK to have some possessions. It’s not that goods are “evil,” because they can do much good. The problem is when our possessions become all we want and all we focus on.

The Dalai Lama says there’s nothing wrong with owning some possessions. The Hindus say, “You’ve got to have clothes. You have your prayer. You have something for food.” But you don’t need to have seven spatulas. You don’t need 12 bowls.

The problem is that many of us who have clutter are privileged. Some of us actually can make a choice. We can make this choice of keeping or not keeping something. Most of the world doesn’t have that choice. They’re living moment to moment. When 85 percent of the world goes to bed hungry every night, they don’t have the opportunity to decide, “Do I need this or not? Do I want this or not?”

It comes down to the difference between want and need. We have wants, but we make them needs. That’s the problem. There are people in the world for whom their need is actually their need.

When you ask monks, “Is money good?” They say there’s nothing wrong with money, because it does a lot of good in the world. The problem is when you become attached to the money. That’s the problem. The Dalai Lama teaches us that the material things are not the problem. It’s when we become delusional that we get satisfaction from them.

So, the problem isn’t the stuff. It’s worshipping the stuff. That’s what Jesus is telling us as well.