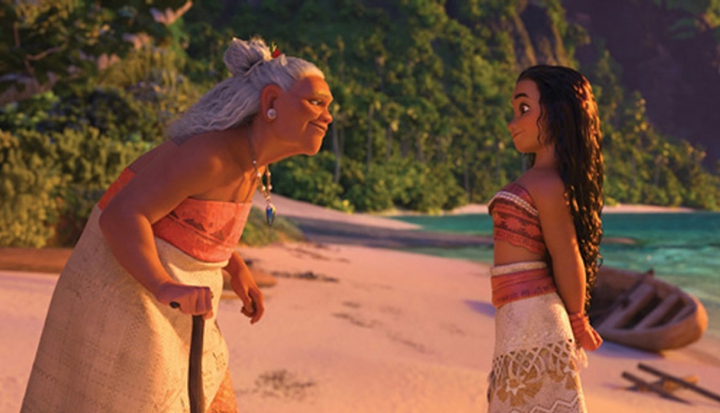 “Take your broken heart; make it into art,” Meryl Streep said through tears, quoting her late friend, fellow actress Carrie Fisher, when she accepted the Cecil B. DeMille Award at the Golden Globes earlier this year.

Streep’s controversial comments were directed at those who felt brokenhearted at the election of a certain president, but her visible grief for her lost friend reminded me—of all things—of a powerful scene in the Disney animated feature Moana.

Like in Disney’s previous princess-franchise blockbuster Frozen, there’s no real villain in Moana. Instead there is a death-dealing lava monster that erupts when anyone dares approach—spewing fire instead of Elsa’s ice. But this monster isn’t a princess; she’s a brokenhearted goddess. Or, more accurately, a stolen-hearted goddess.

The monstrous Te Kā is really the shadow self of the island of Te Fiti, a sort of earth mother whom Moana must appease in order to restore balance to creation, which is failing—crops dying, fishing nets coming up empty. Te Fiti went from abundantly fertile and peaceful to angry and murderous when Maui, part man and part god, literally stole her gemstone “heart” in a botched attempt to win the admiration of humankind. (Maui is a bit of a narcissist who craves hero worship above all else.) But his plan backfires.

Without the power to create life, contained, mysteriously, in her heart of glowing stone, Te Fiti becomes Te Kā and creates death and destruction instead, and Maui is in exile. Moana and her people will die unless she can find the demi-god, now a cast-away with nothing but his broken magical fishhook, and restore the ancient heart to its rightful owner.

Spoiler alert: What follows is a fairly typical buddy flick, with all the predictable tropes. Moana and Maui butt heads and argue comically until they finally grow to admire one another. There’s a montage. One Christian critic dismissed the film as a tiresome example of the “Junior Knows Best” trope—a term that describes any plot requiring a child-hero to reject parental authority to achieve the ultimate good.

But when Moana rejects her father’s prohi-bition to venture out to sea in order to find Te Fiti’s lost heart, she does so with the encouragement of her grandmother, who is depicted as a source of deep historical and intuitive wisdom (a round-up of other clichés, including the “wise old woman” and the “village crazy lady,” in one robust, earthy, loveable package). So if Moana is a challenge to patriarchal authority, it’s a much deeper one than “Junior Knows Best” implies. It’s a story about the connectedness of women across generations and ages and the healing power of that connection.

Moana—the young princess—is dispatched by her aging grandmother to heal the dying mother of all. Moana breaks with patriarchal authority, yes, but she does so to obey the matriarch of her people.

When at last she reaches the fearsome Te Kā, Moana doesn’t cry, scream, fight, or run. She doesn’t attempt to reason or threaten or coerce the vicious magma-spewing demon lurching across the ocean to consume her. She doesn’t lecture or pick a fight. Neither will she allow Maui to harm her. Instead, she says calmly, simply, almost shockingly, “Let her come to me.”

As Moana holds the heart of Te Fiti, the key to all life on earth, lost and found many times by this point in the narrative, in her own small hand, she sings: “I have crossed the horizon to find you, I know your name/They have stolen the heart from inside you, but this is not who you are/You know who you are, who you truly are.”

For a moment Te Kā grows larger and even more terrifying. But then the song pierces her like an arrow, and she bends, touching her volcanic forehead to Moana’s in a traditional Polynesian greeting called hongi.

As Moana sings she restores the glowing heart of the island, and Te Kā is transformed once more into Te Fiti and assumes her peaceful repose in the ocean, teeming with life and bounty.

It may seem like she’s healed by the power of song, but I don’t think so—it’s a Disney movie, so of course there’s a song.

It may also seem like she’s healed by the tradition, a ritual greeting centuries old, but again, I don’t think so. How many Disney viewers are familiar with hongi? Instead we read this as an expression of recognition and trust, for both characters.

The touching of their foreheads, one smooth and unmarked by sorrow, the other ashen and enflamed with pain and anger, was such a tender moment; I don’t think I was the only parent in the audience who was moved to tears.

In Frozen, Elsa unwittingly wounds her sister in anger and then just as unwittingly heals her with filial love. But in Moana, a young woman brings healing to a tortured “sister” simply by being present, by refusing to be afraid of her pain, by reminding her of who she really was before she was broken—who she still is.

Which brings me back to Streep’s Golden Globes acceptance speech. Her words echoed so many who are feeling wounded, confused, angry, and bereft after a particularly divisive election. It wasn’t necessarily what she said that reminded me of Moana—though as a writer I endorse the healing powers of creativity—but the tenderness with which she remembered her friend and the courage it gave her to recall her words.