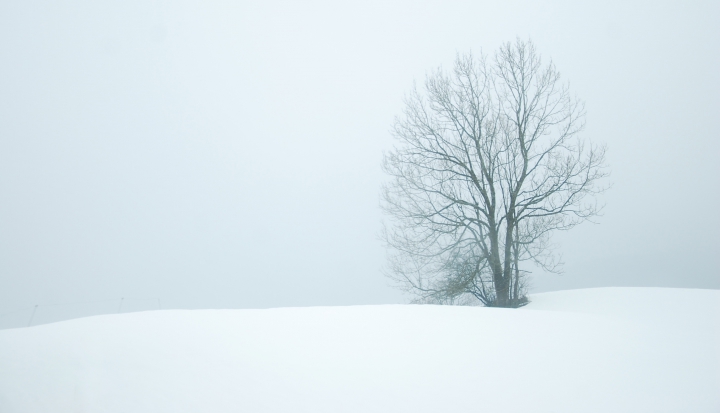 The analogy of Lent as a desert has never worked for me. I was born and raised in Wisconsin, and except for a year spent in Chicago, I’ve lived here my whole life. The closest I’ve come to a desert is the Desert Dome at Milwaukee’s Mitchell Park Conservatory. February and March in Wisconsin—the Lenten months—are about as far as you can get from hot and dry. Lent to me has always been cold and soggy. When Lent arrives in Wisconsin, winter is only half over.

For many of us in the United States, Lent is blackened snow in the streets and muddy boots in our hallway. Lent is wondering if maybe we’ll just skip spring entirely this year in favor of freezing rain until June. Lent is Christmas lights still up on too many houses because owners missed the one and only 40-degree day when they could have taken them down.

So with the analogy of the desert not working for my Lent, I found it extremely appropriate that Lent in Wisconsin was brought in by a blizzard last year. The snow that closed the city seems to me to be a fitting beginning to what Lent should be about.

Lent, when done right, should begin by shutting everything down. Last year on Ash Wednesday, the blizzard closed the kids’ schools and my husband’s and my workplaces. It changed our plans. It turned what would have been a typically complicated day—driving kids to school and practices, attending meetings, running errands—into a very simple one. All six of us home together, shoveling and eating vegetable soup. It can be hard to determine what in our lives is essential if we never take time to step away. Lent provides the opportunity to take a spiritual snow day. It is a time of “closing” some of the nonessentials in our lives.

The interminable snow and ice of Wisconsin’s February can be a spiritual analogy just as surely as sand and cacti. Theologians often talk about the “desert times” in our spirituality—times we feel alone and disconnected from God. But to me, there’s something appealing about any time that’s warm and dry. A spiritual desert doesn’t sound so bad—God may be quiet and you may be alone, but at least there’s no danger of frostbite.

In contrast, when I struggle to see God’s presence in my life it is usually because I’m in the middle of a situation that seems impossible. It seems that if I turn one way, there’s cold wind whipping on my face. If I turn another way, there’s sleet. Four times

I have spent Lent as a foster parent. The first time we had just received 1-year-old Teenasia, and the whipping wind was the complete uncertainty of her situation. The second time Teenasia had been with us for a year, and the sleet was giving her back to a situation in which we had no confidence. The third Lent was Jamie—a Lent that included a thaw and the promise of spring—we adopted her shortly after Easter. And now, we have Teenasia back with us again, and the bitter cold of the court system feels unrelenting. I know spring will come because it has before, and I believe in summer and warmth and life without mittens. But from where I sit at the beginning of this Lent, it is so hard to see the sun.

If the desert analogy of Lent is about being alone, a winter analogy of Lent has to involve people. Winter makes you want to huddle. Winter is about cozying together around a fire or cuddling on the couch under an afghan. While it’s easy to imagine Jesus spending 40 days in the desert by himself, I doubt that if he lived in a different climate, he would have gone into the cold, snowy forest by himself for the same amount of time. Winter alone can be dangerous. Lent alone can be dangerous, too.

Perhaps in no church season is the community as important as it is during Lent. In looking into ourselves and seeing our own brokenness, we need to be around people who are doing the same. Jesus himself recognized he shouldn’t be alone in his most difficult hour—and desperately asked his disciples to not leave him by falling asleep. The icy winds of Lent require us to find people to huddle with. The prayer, fasting, and almsgiving of Lent underscore the importance of this community huddle. We pray and fast with our community, and then we give alms to those within the community who need our help. Though Ash Wednesday is not a holy day of obligation, we turn out at church in great numbers. We know we belong together on this day. We know we cannot be alone in the cold.

We are warmer together. We share our energy. And even if together we still cannot quite see the sun, we can remind each other of the times before, when the winter ended. We can tell each other stories of the coming of spring. Together, we can await the resurrection.