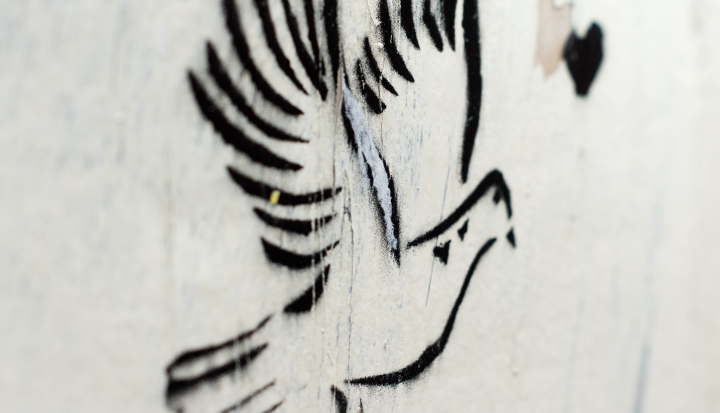 When I think of martyrs, I usually think of people with foreign-sounding names like Perpetua or Attalus, both of whom were thrown to the lions in the Roman Colosseum for refusing to recant their faith in Christ. Sister of St. Joseph Karen Klimczak—a clown, storyteller, teacher, and peacemaker—is far from that image of martyr. Photographs that capture her warm smile or her loopy cursive handwritten prayer journal entries make her seem like any number of religious sisters I know who have dedicated themselves to service with and for those on the margins. Though Klimczak was not explicitly killed “in hatred of the faith,” she, like those martyrs of the Roman Empire, paid the ultimate price of her life.

Klimczak’s life and death reflect her embrace of “the folly of the cross” and her willingness to see with eyes of faith and forgiveness those who can be difficult to love. After recounting the story of a man who stole a wallet from someone who had offered him charity, Dorothy Day wrote in an essay that we are “to love to the point of folly,” for this is how Christ loved. Over my years in ministry I have encountered people who are incarcerated, ex-offenders, or homeless who stretch my sense of mercy’s limits. Most of us don’t find it challenging to serve the poor we (rightly or wrongly) judge as “worthy”: those who are grateful, hardworking, or simply in need of a hand up.

I suspect I am not alone in finding it much harder to serve the poor when their behavior—often influenced by substance abuse, mental health issues, or other challenges—angers or disappoints us or even threatens our own safety and well-being. While coordinating a homeless shelter I recall well a volunteer who walked away one night, disillusioned that one of our homeless guests was dishonest about his life circumstances and disturbed that another guest was a registered sex offender. We want to be merciful and serve Christ in “the distressing disguise of poor,” to use St. Teresa of Calcutta’s line. Yet when we are in real relationship with those who are poor our idealistic illusions about “the worthy poor” become tarnished. We may be tempted (like that homeless shelter volunteer) to simply walk away. Or we may prayerfully struggle to reconcile our discouraging experiences on the one hand and the Sermon on the Mount’s radical teachings on the other.

If we truly embrace the inherent, God-given dignity of all people with no exceptions, we may face hostility as we seek to live the gospel and perform the works of mercy. The life of Klimczak, as well as the life of Jesus whom she followed, reflects that uncomfortable truth in a dramatic way. Klimczak’s commitment to mercy in the face of violence and injustice challenges me as I seek to accompany those in need, especially when they make destructive choices.

Sister Karen Klimczak was born Theresa Klimczak, the seventh of 12 children, in Lackawanna, New York in 1943. The family was active in their parish, and following Sunday Mass the family’s midday meal was open to all. The value of hospitality she learned at those meals shaped her future ministry and commitment to inclusive community.

In 1962, after high school graduation, Klimczak entered the Franciscan Sisters of St. Joseph, choosing the name “Karen” in honor of her late 2-year-old niece. Klimczak became a Catholic school teacher. Her joy in teaching was reflected in her journal: “Lord, today was so beautiful in school. I’ve grown to love the students so much.”

She attended Loyola University Chicago, where she joined a campus liturgical performing arts company and learned the art of clowning. Klimczak created Bounce the Clown, and in her pigtailed wig, face paint, and “kindness hat,” she embodied childlike joy, seeking to communicate God’s love and peace in hospitals, schools, and nursing homes. “I’m your clown, Lord,” Klimczak wrote in her prayer journal.

Klimczak began her transition from the Franciscan sisters to the Congregation of the Sisters of St. Joseph in 1978. In keeping with the Sisters of St. Joseph’s charism of “unity and reconciliation,” she spent the summer of the following year at Providence House, a New York City shelter for homeless and/or formerly incarcerated women and their children.

With assistance from Father Roy Herberger, she established HOPE House, a communal home for nonviolent ex-offenders on Sycamore Street in Buffalo in 1985. Men leaving a New York State correctional facility often had nothing more than $40, a bus ticket, the clothes on their backs, and a criminal record, which made securing employment, housing, and other resources challenging. HOPE House offered a home for men where they could believe in themselves and work toward a better future.

Klimczak called the residents her “guys,” and she found God in her day-to-day interactions with them. “HOPE House isn’t just for men who have been incarcerated. HOPE is for me to grow, to see brokenness in the eyes and hearts of individuals. When brokenness is there, we can see God, and God becomes real,” she journaled.

Recalling his relationship with Klimczak, former HOPE House resident Cliff Zane said, “There are very few people in this world who will look at you as a person. She was one of them.” Two years after HOPE House opened, two area priests—Father Joseph Bissonette and Monsignor David Herlihy—were murdered on Buffalo’s East Side. These tragedies only reinforced Klimczak’s commitment to peace and her desire to work against violence in Buffalo. She and Father Herberger visited the perpetrators of those murders to offer them forgiveness. In 2003 HOPE House was renamed Bissonette House to honor Father Joseph Bissonette’s legacy of nonviolence.

In addition to her work at HOPE/Bissonette House, Klimczak promoted nonviolence through the creation of dove-shaped signs that read, “I Leave PEACEPRINTS.” For Klimczak, “peaceprints” contrasted with the fingerprints present at a crime scene—a visible mark of peace as opposed to a visible mark of violence. The 2,000 peaceprint signs Klimczak ordered were cut out by inmates at the Attica Correctional Facility. Klimczak’s biological sister, Alleghany Franciscan Sister Jean Klimczak recalls, “Karen told me, ‘You leave your fingerprints on everything. We need to be people who leave imprints of peace wherever we go in our world.’ ”

On Good Friday, April 14, 2006, she returned home after participating in the Stations of the Cross in downtown Buffalo and then went missing. Poignantly, Klimczak died on Good Friday. She was murdered by Bissonette House resident Craig Lynch when she walked in on him stealing her cell phone to sell for drug money. Fifteen years earlier, Klimczak had penned these words in her journal, addressed to the person she intuited might do her harm in the future: “I forgive you for what you have done and I will always watch over you, help you in whatever way I can.”

Klimczak’s funeral at St. Ann Church was attended by 2,000 mourners, and her trademark peaceprint doves were distributed. “Her legacy is one of humility, service, encouragement, and peace. The best way to remember her is through forgiveness,” Father Herberger remarked during the liturgy.

The SSJ Sister Karen Klimczak Center for Nonviolence in Buffalo continues Klimczak’s legacy through education and training in collaboration with other organizations that work for peace. Her peaceprint dove signs continue to be seen throughout western New York—a tangible reminder of Klimczak’s steadfast vision of forgiveness and nonviolence more than 10 years after her death.

For me, a candidate in religious life, Klimczak—with her courage in loving those who are so often viewed as unlovable; steadfastness in embracing the folly of the cross; sense of humor, creativity and drive; and lifegiving relationships with so many—is a model of generative and joyful 21st-century vowed life. For all of us who seek to live mercy even when it stretches our limits, her witness is a powerful example.