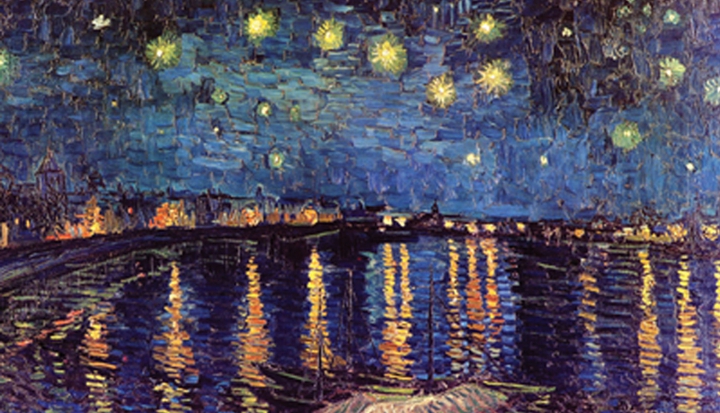 When someone wishes us a Happy New Year, too often the spirit of the cynic is tempted to rise up from its subterranean swamp in our souls. What’s so new about it, after all? Why be happy about turning a calendar page? The difference between December and January is an incremental movement of a second hand on an analog clock. Or the merest flicker on a digital timepiece. If you’re flooded with free calendars every year, as I am, January 1 is mostly about choosing whether to spend the next 12 months looking at pictures of monkeys, dolphins, flowers, or fruit bowls.

Is there anything new about a new year? When we look out the window, we don’t see what month it is or the day of the week, much less 2017. Our construct of time is attached to seasons that sometimes transition as they should and, more often in this era of climate change, do unexpected things. And, if this is the case, is there really even such a thing as January? If all timekeeping devices vanished overnight, every last flashing LED date stamp disappeared, how long would it take until we stopped saying “Happy New Year” and forgot to thank God it’s Friday?

Consider a less universal and more likely scenario. If the first of the year finds you in a sickbed, suffering a season of loss, on the street, or friendless and alone, does a new year happen for you at all?

With apologies to all the Capricorns out there, let me suggest that the reality of January doesn’t matter. What does matter is finding our way around the cycle of life to a new beginning on a regular basis. Beginnings count for something. They matter a lot. In the course of our routines and relationships, we get into a groove that can quickly become a rut. We face the same bagel every morning or the same stack of memos at work. We pray prayers that sound suspiciously like yesterday’s petitions. We hassle our kids with worn phrases they can repeat in their sleep. We get our news from familiar sources that tell us what we want to hear. Our opinions are neatly filed so they can be retrieved and recited at the drop of a hat. Are we bored with ourselves? Perhaps we should be.

What beginnings offer us is a chance to reflect on what was and consider what could be, if we let it. This morning I skip the bagel and order potato pancakes. In my prayers, I ask for nothing and simply praise God for every great thing that happened yesterday. When I see my kid, I hold my tongue about his appearance and ask about his day. I change the channel or subscribe to a fresh email newsletter and hear a novel perspective on what’s going on in the world. I stop offering my opinions like a gumball machine and ask someone else for hers.

What might 2017 become if I opened it up to the possibility of being a genuinely new episode of my life instead of a tiresome rerun or lame sequel? What if I approached today with an open, eager spirit, forsaking all preconceptions about these free and curious beings who inhabit my life and roam through my territory? Zen Buddhists have a name for this stance: beginner’s mind.

Author Shunryu Suzuki notes, “In the beginner’s mind, there are many possibilities, in the expert’s mind there are few.” Many of us stomp through the day like grim experts at being ourselves. We know what we like and don’t like, accept and reject, expect and dismiss from the realm of credibility. We may grouse about how nothing ever changes, history repeats itself, and human nature is what it is. But maybe we’re the ones who are refusing to evolve.

If you want a Catholic name for beginner’s mind, try grace. The divine river of grace flows through our days, inviting us to wade in, play, refresh ourselves, dare to take a risk and do something differently. Grace has the full authority of holy transformation in its waters. Just as you can never step into the same river twice, you never emerge from the river of grace quite the same as when you waded in.

The story we retell at Epiphany each year manifests two approaches to the gift of a new episode in time. First we have King Herod, as entrenched in old-think as you can possibly get. Old-think clings to what it has and fears dispossession above all. Herod has the throne, and he doesn’t want to lose it. He also believes he has the situation of being the top Judean in Roman-occupied Jerusalem under control, and he won’t allow anyone to rock this precarious boat. A newborn king of the Jews somewhere in King-David-mythologized Bethlehem doesn’t figure on the landscape of Herod’s ambitions. Bottom line in the king’s mind: Find the baby, eliminate the threat. Then back to business as usual.

On the other side of the equation we have the magi, sometimes styled as wise and sometimes kings themselves. Whatever their authority, the magi wander into the story with all the wide-eyed wonder of children. Curiosity had them looking up at the stars to begin with. Open-heartedness enabled them to imagine that the heavens might choose to speak to mortals, and that they might actually translate the message. In their eagerness to reply, they leave their homelands following a star, seeking a foreign king, bringing treasure with which to honor him. Could there be an assortment of innocents more vulnerable to possibility than these fellows? Their trusting adventure into the unknown is touching and absurd, a deeply spiritual quest or a bizarre astronomical crusade. The bottom line for their beginner’s minds: Seek the king inscribed in the heavens, bow down before him. Let the creative and responsive world of dreams determine what happens next.

We may balk at the idea of following in such naive footsteps. These so-called wise ones wander right into Herod’s camp! They trust a paranoid tyrant, agree to act as his search party, very nearly betraying the little king they seek. These magi star-children might have come back to Herod, fallen into his clutches themselves and been eliminated in the slaughter to come. Should we then give ourselves over to stargazing and dream-interpreting and put the future, not to mention ourselves, at risk?

If we can smell the fear in that last paragraph—as well as trace amounts of arrogance, pre-judgment, self-protection, and defensiveness—we might be prepared to consider why all of it feels so necessary. As the story unfolds, the magi remain on their beginner’s wide-mind track and escape all peril, as does the newborn king. It’s Herod who will lose, foiled in his attempt to eliminate the threat no matter how many babies he kills. Eventually, even the throne he guards so ferociously will slip through his cold, dead hands. Old-think cannot win. The sands of time insist on a new moment, and they will win.

So what do you think? Should we give grace a try? Might we contemplate the adoption of an open mind as we hang the next calendar, turn to the fresh page? I’m going to acknowledge this new year as authentically, deliciously new. I’ll dare to call it happy. I’ll risk trailing after a star.