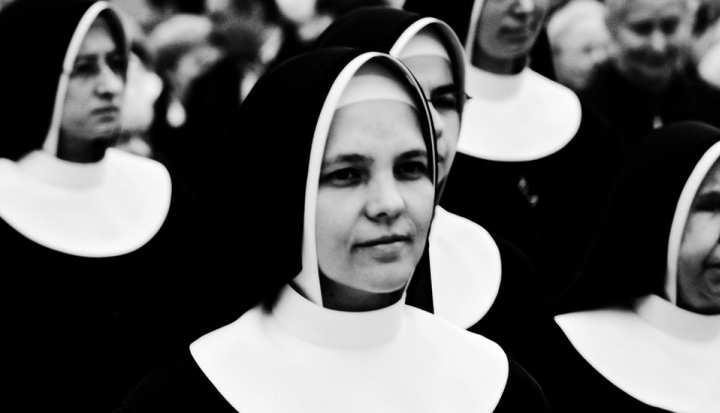 Sister Heather Stiverson has become something of a poster nun.

A new web campaign called “Sister to All” is publicizing Stiverson’s life and work as a literacy instructor and member of the Dominican sisters—or Order of Preachers—in Detroit. The campaign tries to counter various misconceptions of Catholic sisters. For example, 37 percent of Americans believe that Catholic sisters have little or no impact on non-Catholics.

Stiverson teaches English as a second language to immigrants from Bangladesh and Yemen, as well as basic adult education to Americans struggling to find work in Detroit.

“It’s evident here that most students are Protestant, [have] no religion, or Muslim,” Stiverson said. “We definitely don’t have a lot of Catholic students.”

Stiverson’s photo and story are among six profiles of American sisters on the Sister to All campaign website. Two of the sisters featured wear full habits. The others are in modern clothing. In Stiverson’s bio, she describes her path to religious life.

“I didn’t grow up wanting to be a sister because I wasn’t Catholic,” Stiverson says. But her professional work led her down the path of religious life.

“When I was 18, I started working for the Dominican sisters as a nursing assistant while I was going to college. I went to some of their liturgies and thought they were beautiful. I was attracted to the Eucharist,” Stiverson says.

She converted to Catholicism and spent the next few years working with the sisters.

“I was really attracted to their joy and work in social justice, especially with people on the margins,” Stiverson says. “They began to ask me, ‘Have you ever thought about being a sister?’ One day, I said, ‘Yes.’”

The Sister to All campaign aims to reach women who may have a call to religious life but who haven’t been exposed to many women religious—women like Stiverson. The campaign is supported by the Conrad N. Hilton foundation, which spends $17 million dollars a year to support sisters’ work around the world.

The foundation’s research found that while 73 percent of people say they like Catholic sisters, many images people have of sisters come from inaccurate sources—think movies like Sister Act.

“We believe that how people perceive sisters—no matter if they’re Catholic or Jewish or Muslim or Hindu—kind of ingrains a dynamic in the culture that can influence how our works and prayers can be received, can be in some way emulated,” says Sister Rosemarie Nassif, who directs the Catholic Sisters Initiative at the Hilton foundation.

They hired a public opinion research company—Boston-based Anderson Robbins—to contact 1,600 people by phone or in focus groups to ask about perceptions of Catholic sisters.

“These women are trailblazers, risk-takers and pioneers,” Jennifer Robbins, the Anderson Robbins CEO, says, “These are words that could be used to describe them 100 years ago and still today with the work that they’re doing around the world. They were the first female nurses on Navy ships. A Catholic sister helped invent the first incubator for babies.”

The people Robbins spoke with in focus groups were similarly inspired by the work of sisters.  The survey found a third of all Americans want to learn more about Catholic sisters.

"In some of these groups, after all was said and done, people wanted me to keep sharing information about these women,” Robbins says. “There was a real appetite for more detailed information. It was like like I blew their minds.”

While the Sister to All campaign is meant to get the word out about sisters to all people, there is a focus on millennial women—the group that can bolster the ranks of sisters.

The study found that one in four Catholic women have considered becoming a sister. But many millennials polled say they’ve never met a sister.

Those who have, and who go as far as to consider becoming a sister, might face friction in their families over the choice. Forty-three percent of people who answered the survey said that if they had a daughter considering the sisterhood, they’d support her completely. But 13 percent would urge her to reconsider and six percent would strongly oppose the decision.

Research found that Americans are twice as likely to hold very favorable views about sisters than they do for priests and the church.

“Sisters are seen as somewhat under the radar” of the church’s sexual abuse scandals, Nassif says. “And they are also seen in some ways as…not engaged in the hierarchical realm of the Catholic Church. Sisters have the advantage of being with those who are disadvantaged. Also the sisters who are dedicated to prayers for others—their lives are seen as a crucible for others. That engenders trust.”

When more people learn about sisters, the research found, it can help not just sisters, but help priests and the Catholic Church to restore their reputations. Nassif calls this “the halo effect.”

“As the works and the lives of sisters were more appreciated, it also led to a greater appreciation of priests and clerics,” Nassif says.

But the Sisters to All campaign is not just about perceptions, it’s about those lofty goals of creating a more just and peaceful world.  “The global sisterhood is a very powerful network and it hasn’t yet been fully unleashed. Unleashing that network can bring such tremendous positive realities to our entire world,” Nassif says. The Hilton Foundation is committed “to assure that network has a life. And a life that can continue to change the millions of lives across the globe whose lives are so precious and yet so vulnerable.”

Jennifer Szweda Jordan is sharing the stories of sisters through her project Standup Sisters. The work received a minigrant this year from National Catholic Sisters Week, which is funded by the Conrad N. Hilton Foundation. More details about the research and campaign are at SisterToAll.org.

TagsWomen in the church Women religious

Conversion is a lifelong process, says this professor