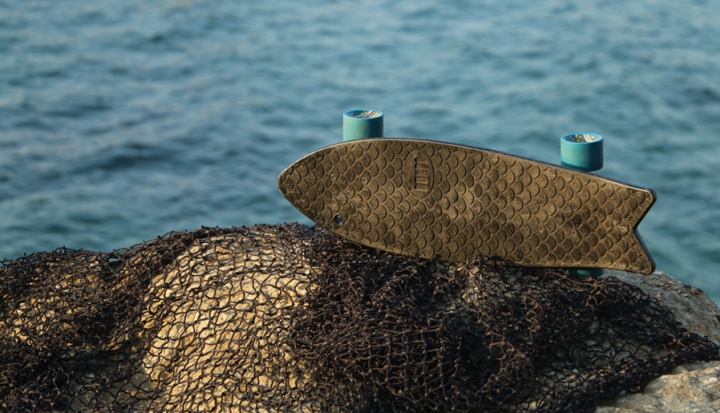 A search online for sustainable skateboards, sunglasses, or bamboo utensil sets reveals Bureo—the company—in the top results. All their lines of gear are fun, extremely well-engineered, eco-friendly, and, again, fun. Exploring the site and the company’s young history rewards the curious with an inspirational narrative of an American success story played out on a global stage.

In our April 2016 issue, U.S. Catholic featured the environmental work of the Sisters, Servants of the Immaculate Heart of Mary community in Monroe, Michigan. As Pope Francis makes clear throughout Laudato Si’, the earth is a home shared by people of all countries and faiths. Given the serious threats to our environment, it is imperative to “enter into dialogue with all people about our common home. . . . Nothing in this world is indifferent to us,” writes the pope. In this spirit, Bureo is an energized example of a team completely outside of religious life that dedicates its skills to heal part of our common home.

Bureo is driven by a dedication to the care of the planet. This creative, dynamic start-up was founded by three friends who share a serious commitment to creating global solutions that undo current and prevent future damage to marine ecosystems. These founders are Ben Kneppers, David Stover, and Kevin Ahearn, and they share common passions for surfing, skateboarding, and the environment. Kneppers is a mechanical engineer with a master’s in strategic leadership toward sustainability; Stover is a mechanical engineer with a special focus in financial analysis; and Ahearn is an engineer with expertise in product development.

The two overarching goals that guide their work? Developing solutions for the dangerous issue of plastic pollution in the oceans and inspiring others to become aware of and involved in improving the health of the planet.

A report from the United Nations Educational, Scientific and Cultural Organization (UNESCO) and the Intergovernmental Oceanographic Commission (IOC) regarding the priority attention required for areas of oceans highlights the following realities:

Discarded fishing gear accounts for about 10 percent of the plastic pollution in oceans. Bureo’s founders decided in 2013 to take on this massive segment of marine pollution. The beaches in California had debris washing up regularly. Picking it up was better than nothing, but ultimately that cleanup effort always needed to be repeated. They decided to research a major source of the marine plastic and worked to strategize a solution for permanent change. Their research took them to Chile, where they discovered enormous mounds of worn-out, abandoned fishing nets.

These nets tend to not break down in the ocean. They function like “tumbleweeds underwater, ripping up reef systems,” says Stover. The abandoned nets also trap a wide variety of marine mammals, which often have no way of escaping the tangled trash. The friends decided to combat this key source of ocean pollution.

Kneppers, Stover, and Ahearn talked with local fishermen, wanting to understand the fishing culture along Chile’s coast. They hoped to begin work with the support of the Chileans to collect the wornout nets, as the founders continued to strategize how to turn the nets into something sustainable and positive. The fishermen were open to learning about the dangers of discarded nets. The locals developed a respect for these Californians, recognizing each had his own deep love of the oceans.

An official from Chile’s National Aquaculture and Fishing Office noted in those early months, “the fishermen do not recycle their materials . . . this is a big opportunity for the artisanal fishing industry to avoid polluting with those wastes.” He continued, “The Chilean coast is a very long coast . . . with a rich abundance of sea life, which is unique in the world. Without a healthy ecosystem, the fishing production can find itself reduced or terminated. I believe there is much to do in this case.”

The founders designed a recycling program to turn the fishing net waste into smaller-scale skateboards called Minnow Cruisers. The program is called Net Positiva because it is truly loaded with positive outcomes for the fishing net problem they first started to tackle. By the end of 2015 the program grew to involve 16 communities, including large ports and small fishing villages throughout Chile. In 2015 alone Net Positiva collected over 110,000 pounds of nets. The program also received recognition from the U.S. State Department, which led to a meeting of the founders with Secretary of State John Kerry.

“The problem is global,” says Stover. “Chile has a vast coastline with a robust fishing industry. There was an opportunity there. Chile gave us the opportunity to set up this first program.” The team developed their strategy. They decided “to harvest this plastic from the ocean,” Stover continues, with each of them excited to “put real social environmental value behind it, and then let’s make something positive. Let’s make something that will make people happy when they use it.” Kneppers suggested they design a new skateboard, and the team moved on to determine how.

“Through Net Positiva, we’re able to source this really recyclable and highly durable material,” explains Ahearn. “We collect the nets much like a grape harvest in the port towns. When it’s collected and enough nets build up there, they’re cleaned and prepared by the local communities. The nets are then put on a truck and transported to our recycling and manufacturing facility in Santiago. There, the nets are shredded, melted down, and re-pelletized. The beauty is that once they’re in that new pellet form, it’s really no different than a virgin pellet and can be made into anything you want through an injection molding process. At our facility in Chile, basically nets come in one door and skateboards come out of the other!”

The founders understand that recycling the nets and production of the unique and very effective Minnow Cruisers needs to be followed by spreading the story to educate and inspire any and all Bureo followers. They bring a sample net and a few Minnow boards to events aimed at inspiring students and other young adults to not take the environment for granted. “We let them know,” Ahearn says, “the skateboard you’re riding, you know, is keeping 30 square feet of fishing net out of the water! It’s cool for us to connect with this next generation of kids to show them that there are alternatives to the way things [have usually been done].” The goal is to get them to feel a need to “start thinking differently.”

“By continuing to develop innovative solutions and creating other projects and other products from this material, we can start to find ways to solve these global problems together,” says Stover. Patagonia, a premiere outdoor outfitter corporation with a longstanding commitment to environmental responsibility, has awarded investment support to Bureo since late 2014. In addition to enabling Bureo to scale more quickly, this investment was an honor, as it only recognizes business “entrepreneurs and innovators who are working with nature rather than using it up.”

The Bureo team is also developing net collection programs in other global coastal communities. Kneppers has a straightforward yet elegant way to sum up their programs: “Just as a wave starts with this small disturbance on the surface of the ocean, we started this small change with just the three of us scrubbing nets to make these skateboards. With more time and energy, just like that small disturbance, we hope we can create this great force of change. That’s what we foresee with our efforts. That’s what we’re believing in . . . that greater way to make waves.”

Kathryn Horning is the former creative director of U.S. Catholic.