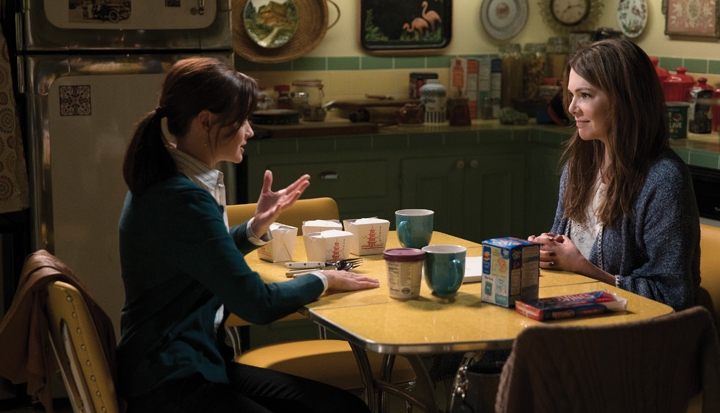 Oh, to live in Stars Hollow, where crabby but hunky Luke runs the diner, quirky Kirk holds a long string of peculiar jobs, and a single mother and her daughter can be seen as a legitimate and respectable family.

On television and in film, single mothers are too often portrayed as hapless victims, struggling to raise children in the absence of a male breadwinner. Media’s single moms live in dismal apartments in gritty neighborhoods, dress in thrift-shop clothing, and seem wearily defeated by life. They have bad posture, bad hair, and bad luck.

In crime shows they are either slain in a grisly manner in the first five minutes or are blamed for raising serial killers. In comedies they are jokes, the moms other mothers don’t trust, creepily over-invested in their children, or unable to parent their way out of a grocery bag. In dramas they require rescue by the only possible heroes for women who are alone: financially successful men who can put a roof over their heads and give their lives direction.

Not Lorelai Gilmore. The heroine of the seven-season-long WB and CW series Gilmore Girls that ended in 2007 and was revived by Netflix on November 25 as Gilmore Girls: A Year in the Life befriends an entire town on her journey from 16-year-old teen mother to successful businesswoman. Lorelai is a wise-cracking, self-deprecating, lovely, and devoted mother who eats junk food like an 8-year-old, fights fiercely to get her daughter into the best schools, and adroitly walks the fine line between best friend and dependable parent as she and Rory gossip, binge-watch old movies, and order massive amounts of unhealthy takeout.

There is nothing pathetic about Lorelai. She doesn’t know how to turn on her own oven and sometimes struggles to pay the bills, but she is also buoyant and driven. She faces challenges with common sense and has a clear vision for the life she wants for herself. Her ambition does not collide with her responsibilities as a mother; she balances both with nary a moment of the “Hm . . . earn a living or pack a school lunch?” pseudo-conflicts that overpopulate less-inventive television story-telling about parenting dilemmas.

Rory is not a perfect child. She acts out in high school and college, makes errors of romantic judgment—some of them doozies—and pitches a self-indulgent fit when she hits a career disappointment. Unwilling to deal with her mother’s disapproval, Rory drops out of Yale and hides at her grandparents’ home, living in great privilege.

Lorelai is not a perfect mother or daughter, either. She too has romantic misadventures, leaving her prospective groom the night before her wedding and warily circling Rory’s father in a cycle of reuniting and breaking up. She is sometimes downright mean to her Daughters of the American Revolution-member and St. John-wearing mother, Emily, and Lorelai’s constant sarcasm can be wearying. But families are made of imperfect humans, and perfection is not the point—unconditional love and support are.

Gilmore Girls also refuses to solve the “problem” of single parenthood with the arrival of a heroic man. Both Rory and Lorelai struggle to preserve their ambitions and dreams while searching for love, and neither falls into the tidy television happily-ever-after trap in which “Will you marry me?” is the magic panacea. This question is asked four times in the series: twice of Lorelai, once by Lorelai, and once of Rory, and the question does not resolve conflicts, but (realistically) creates new ones.

Amy Sherman-Palladino wrote the Gilmore Girls pilot with financial support from the Family Friendly Programming Forum (now the Association of National Advertisers [ANA]), a group of major sponsors such as Kraft and Proctor & Gamble who wanted to encourage programming that could be watched by the entire family. The ANA has no influence over the show’s content, and Gilmore Girls proves that “family friendly” need not mean prudish, out-of-touch, dull as tombs, or sugary sweet. The show is sassy, smart as a whip, and peppered with pop culture references and witty zingers. It is fun to watch.

It also does important cultural work in expanding definitions of family and community and offers representations of both that reinforce traditional family values outside of what is typically pictured as a traditional family.

The term “family values” is often used to imply that principles and morals can exist only in a family unit of father-mother-child, and preferably one in which the male is the major breadwinner and the mother knows how to bake cookies. But the value of family is far more resilient and tenacious than that. Families can be formed in complex, evolving constellations or simple dyads. Families can be genetically dictated or picked by hand. Families can be multi-generational, uni-generational, or skip a generation. Families are forged not by following social and cultural scripts, but by following the heart.

Gilmore Girls advances the radical idea that mothers and daughters, even teenaged ones, can get along, at least most of the time. That parents and children can wrestle with unresolved differences yet still love each other. That they might clash over economic or political perspectives, that they might argue about the wisdom of conforming to social expectations versus the freedom of rebelling against them, yet still consider themselves family, through and through. That family drama need not arise from “dysfunction” (whatever that is), but is familiar to all of us in the daily business of cohabitating with people you’ve made or chosen: You drive me nuts, you don’t understand me, I don’t understand you, I love you. Always.