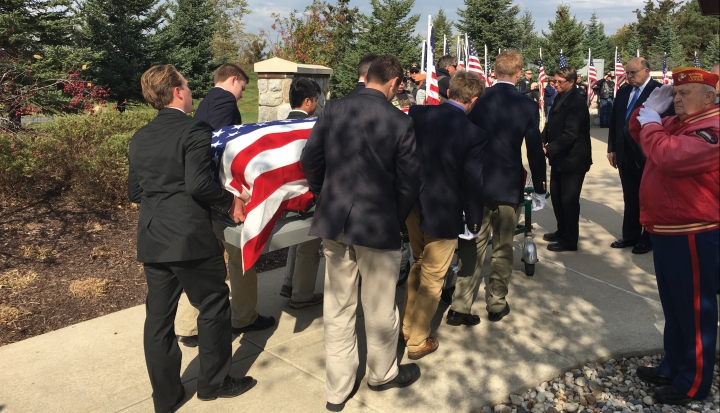 Prior to the funeral at Great Lakes National Cemetery in Holly, Michigan, neither Gonzalez nor his classmates had met the veterans. Each of them died while homeless, their bodies left unclaimed at the Wayne County morgue.

During the service, the students watched as flags draped over the caskets were folded and presented to members of Blue Star Mothers of America, Inc., an organization for women who have children in the military. They heard “Taps” and gunshot salutes and the rumbling engines of the Patriot Guard Riders’ motorcycles.

As Gonzalez prepared to lift the first casket, he was nervous he might mess up or trip. “For the next two, we all looked at each other like, ‘We got this down,’ ” he says. “It was just our honor to be there and serve these people who fought for our country and ensure they got the funeral they deserved.”

Gonzalez was at the funeral as part of his school’s pallbearer ministry, which trains students to be pallbearers for those in need. The ministry is inspired by St. Joseph of Arimathea, who offered his own prepared tomb for Jesus’ burial.

Gonzalez helped start his school’s pallbearer ministry last fall because he was inspired by the school’s motto: “Men for others.” The purpose of the ministry is to serve at funerals for those who are “socially or economically poor”—those who can’t afford funerals or have no one to attend.

“We want to raise awareness of how many people die alone or don’t have anyone to be with them throughout their life,” Gonzalez says. “Everyone has this sad idea of dying alone and not having anyone at your funeral. We don’t only carry the casket for these people, but we’re also present for them. Even though they may have had a bad life, despite however they lived, we ultimately believe all humans deserve to be honored and dignified with respectful burials.”

University of Detroit Jesuit High School student Leonard Froehlich also served as a pallbearer for the funeral of the three veterans. He got involved in the ministry after learning about the many people who die alone or without resources. He says the pallbearer ministry is important to show that everyone has value.

“We are all in a community and we deserve to be respected and cared for,” Froehlich says. “With this, even if you don’t have anybody in your life, there will always be somebody to mourn for you after you’re gone.”

The first pallbearer ministry—the Saint Joseph of Arimathea Pallbearer Ministry—was founded in 2002 at Saint Ignatius High School in Cleveland to serve the community’s dead as part of the school’s Christian Action Team. During the organization’s first year, more than 10 pallbearers served at three funerals.

Today, the club is a well-oiled machine with more than 500 student members who serve at funerals year-round. Since the ministry’s foundation, student pallbearers have served over 20 area funeral homes at more than 1,600 funeral services.

“Over the course of the years, the Arimathea ministry has now evolved into being the largest extracurricular ministry in the school,” says Patrick Valletta, the club’s co-moderator.

Trainings for the student pallbearers take place at the beginning of each school year. During the hour-and-a-half-long sessions, students are taught about the process of a funeral and what they may encounter. Students are also trained in what to say to mourners and how they should dress.

According to Valletta, the ministry is usually asked to serve between four and five funerals every week. The funerals are diverse, revealing many different kinds of life experiences. Sometimes, the deceased are veterans with full military guards at their funeral. Other times, the room will be nearly empty.

“We’ve been at funerals where the only people there were the funeral director, the minister, and the pallbearers and drivers,” Valletta says. “Then we’ve been to other funerals for a sister or a priest, or funerals where we’ve had people who said, ‘We don’t know anyone mature enough to be a pallbearer.’ For the most part, it’s people who have outlived their families or for whom most of their family is elderly.”

Before each event, the students gather for a quick prayer in the school chapel, where Valletta will share any personal information known about the deceased person. Twice a year, the ministry holds a prayer service in Potter’s Field in East Cleveland. Established in 1904 by the city, the field is an unmarked cemetery where an estimated 18,000 indigent people are buried.

Valletta believes the Arimathea ministry is so popular because it’s a simple way to show profound mercy to those who have died in need.

“Even though we might not know the person who we’re burying, we’re being present, we’re being hopeful, and we’re developing some kind of relationship with the people we’re serving,” he says. “I think someday when we all meet our maker, somebody is going to be standing up at the pearly gates saying, ‘You don’t know who I am, but I know who you are because you helped carry me to my resting place.’ ”

The ministry is also popular at the University of Detroit Jesuit High School and Academy. According to faculty member Todd Wilson, who helped found the ministry last fall, the original goal was to recruit between 15 and 20 students as pallbearers. At the first training, nearly 50 students showed up. By the following spring, the school had 75 trained pallbearers.

Next year, Wilson says he hopes to reach out to additional funeral homes to give more students opportunities to serve. This is good news for people like John Desmond, funeral director at A.J. Desmond & Sons Funeral Home in Troy, Michigan. Desmond worked with Wilson to arrange student pallbearers for several funerals this year.

“It’s not uncommon that we have people who die who don’t have family members in the proper number or in good enough health to carry caskets in and out of the church,” Desmond says.

Desmond is also part of a coalition of Detroit funeral home owners who are dedicated to burying unclaimed bodies from area morgues. The bodies Desmond works with are unidentified, or people whose families refuse to come forward to take them after death. Often, those remains stay in a morgue for several years before they are finally laid to rest.

“It’s because of a lack of money, or a lack of love, or a combination,” Desmond says. “At least for these abandoned people, their remains can be placed to rest in a proper cemetery with a religious service that honors their tradition and honors their life. At least they’re not totally forgotten in death.”

Before he became involved in the pallbearer ministry, Froehlich, the student from Detroit, remembers questioning the value of funerals.

“Why would it matter how someone is treated after they died if they’re not around to experience it?” he says. “But it goes along with tradition, and it’s for a greater purpose. You’re born and you pass on and people will celebrate a person’s life no matter what.”

This idea of respect for all people, even in death, goes right along with church teachings about funeral rites. According to Richard McCarron, associate professor of liturgy at Catholic Theological Union in Chicago, a funeral is important for a deceased person because it represents a passage from their physical life to an eternal one.

McCarron says those served by pallbearer ministries benefit from funerals because they are a recognition of their basic human dignity, as well as an opportunity to receive prayers in the afterlife.

“These people are not objects,” he says. “In fact, we pray in the liturgy that life is changed, not ended. We pray for mercy and protection, and we do that in joy and hope.”

But McCarron also says funeral rituals are as much for the living as for the dead, and they offer hope and consolation. Even in cases when the deceased person is unknown, a funeral can be a time to reflect on “who we are and where we’re all headed together.”

“It becomes a way that we can help people to mourn, to grieve, and then also to reclaim a person and to recognize that even in the midst of death this person still has value,” he says.

Though the corporal work of burying the dead is a job most often left to priests and professionals, McCarron says that it has real benefits. By physically feeling the weight of a person and shouldering their body, he says pallbearers are forced to recognize their own mortality.

Teaching the value of the rites and rituals around funerals is one of the largest parts of the pallbearer ministry, says Wilson, who works with the Detroit high school ministry. Though he was originally apprehensive and thought students might not be ready to handle the emotional weight of serving as pallbearers, Wilson says he has been consistently proud of their behavior.

“Watching how seriously they took that role, you can tell they get it,” he says. “It’s a moving experience to watch them and see the pure respect they have for the people who died.”

By allowing students to participate in the work of burying the dead, Wilson says the students are living out the mission of the church’s Year of Mercy, by showing love for others “from the womb to the tomb.”

“There’s a certain sadness in these people who lived their lives and may not have had that connection with others,” he says. “Some people struggle more than others, so this is a chance to look beyond the fault of a person to the good things that they did.”

‘Praying him into heaven’

Valletta says he has noticed many changes in the students with whom he works. After each service, the students are asked to write brief reflections about the experience. Often, he says, the funerals allow students to think about life and death in a new way.

That was certainly the case for Jeffrey Lindholm, who served as a senior leader for the St. Ignatius Arimathea ministry this year.

At 18 years old, Lindholm does not have much personal experience with death, other than a grandmother who passed away. By serving as a pallbearer, he experiences funerals of Catholics, Orthodox Christians, and Protestants. He encounters both weeping families and vacant pews. And through it all, he has become more comfortable with death as a part of life.

“We think of death as this dark, bleak thing, but a funeral Mass in my eyes is a beautiful way to give someone dignity and to pray for that person, which is what we, the body of Christ, are called to do,” he says.

Last fall, Lindholm served as a pallbearer for the funeral of Robert Dus, a man who lived on the streets of Cleveland. Cremated several years earlier, Dus’ ashes sat dormant in possession of the city and social services for many months before Catholic Charities could raise enough money to hold his funeral.

Because there were so few attendees at Dus’ funeral, Lindholm served double-duty as pallbearer and altar server. After the Mass was over and the group met at the cemetery, Lindholm was moved as he watched Dus’ body being lowered into the ground.

“When we’re saying that last prayer at the gravesite, where we’re all going to lower the body into the ground, I always envision that we’re sending him off into God’s mercy,” he says. “I have this image of us passing the baton to God, like it’s now in God’s hands. It’s amazing in the sense that he got that final act he deserved, that we were actually praying him into heaven.”