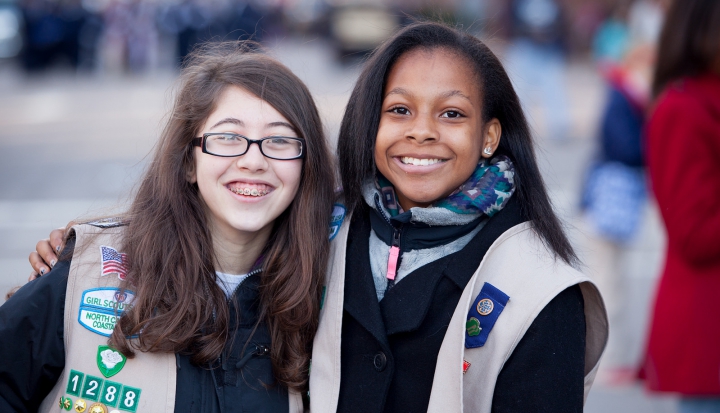 “On my honor, I will try: To serve God and my country, to help people at all times, and to live by the Girl Scout Law.” I was 8 the first time I recited those words, and three decades later they still come easily and evoke a sense of confidence and fellowship. As a child, a teenager, and an adult,

I found my membership in the Girl Scouts to be the perfect complement to my faith. To me, those words—and everything associated with them—walk hand-in-hand with Christ’s teachings.

Recently, I was surprised to find that there are some who feel the Girl Scouts and its parent organization WAGGGS (World Association of Girl Guides and Girl Scouts) don’t fall in line with Roman Catholic teachings. Specifically, they take issue with the inclusion of gay and transgender girls within troops and WAGGGS’ known advocacy for reproductive rights.

As a former Girl Scout, I choose to disagree.

The Girl Scouts has always been known for inclusivity. Being a member was never about who you were, who your parents were, what you believed, or where you lived. It was about who you wanted to be, a better person. A better steward. For me and many others I knew, it meant being a better child of God.

In my experience, Girl Scouting helps prepare girls to be the kind of responsible, responsive, ethical women that the world and the church both need.

While the Scouts has always been a secular organization, it also has had a long-standing relationship with faith—and the Catholic Church in particular. It’s right there in the Girl Scout Promise: “On my honor, I will try: To serve God and my country. . .” In fact, it’s the first thing. For a secular organization, one that welcomes girls of all (or no) religion, that’s a huge statement.

In an age when most people are pushing faith away, the Girl Scouts proudly acknowledges its ties to it. It has chosen to keep God in its promise, when even our school systems no longer require students to recite the Pledge of Allegiance. It’s a conscious choice to include faith, a choice that speaks not only of acceptance but also to the greater tenets it both teaches and practices. Tenets that are nothing if not Christ-like: “I will do my best to be honest and fair, friendly and helpful, considerate and caring, courageous and strong, and responsible for what I say and do. . .”

The first words of the Girl Scout Law—honesty and fairness—are principles I sometimes feel our society has completely forgotten. The first half of the law speaks to how we should treat those around us, without qualification, just as Jesus did when he taught that we should love our neighbor.

The message is clear and uncomplicated, unsullied by politics or dogma. Be kind. Treat people well. Have courage. Take responsibility for your behavior. These are teachings I think any religion would be proud of. And it continues: “And to respect myself and others, respect authority, use resources wisely, make the world a better place, and be a sister to every Girl Scout.”

These aren’t just words memorized for a badge and then promptly forgotten. I’ll admit that in nine years as a Girl Scout (and then another 14 working for and teaching with my local council), I never actually memorized the Girl Scout Law. I didn’t have to. Its principles were taught in every activity, every service project, every meeting, every opportunity to learn responsibility and self-sufficiency, every chance to return the favor or pay forward a kindness.

We lived and breathed the law by example, and they were more than words on paper. That is what the Girl Scouts is about. It’s not cookies and badges. It is new experiences and expanding worldviews. It’s reaping the benefits of one’s own labor. It’s serving those around you and finding joy in it.

Like the Boy Scouts, the Girl Scout motto is “Be prepared.” But being prepared isn’t just about being ready for accidents or disasters. The 1947 Girl Scout Handbook explains that: “A Girl Scout is ready to help out wherever she is needed. Willingness to serve is not enough; you must know how to do the job well, even in an emergency.”

Then there’s the Girl Scout slogan, unchanged since 1912: “Do a good turn daily.” If you’re sensing a theme here, you’d be right.

Some of the most influential women of the last century—an amazing 64 percent of the United States’ current female civic, corporate, and political leaders—were Girl Scouts, and many have openly spoken about their experiences. These women are spread throughout every field—from science to politics to the arts—their names we recognize because they have done so much.

Former First Lady Laura Bush is one among many. In fact, almost every First Lady in the last half century is a former Girl Scout. Nicknamed “Comforter in Chief” by the White House staff, Bush has lived a life dedicated to service. As the founder of the Women’s Health and Wellness Initiative, Bush took on both heart disease and breast cancer, not just in the United States but in the Middle East and beyond as well.

Sandra Day O’Connor, the first female appointed Justice of the Supreme Court, is also a former Girl Scout. A staunch defender of the Constitution and a proponent of civil discussion and critical analysis, O’Connor has long been a role model for girls. Even after her retirement, O’Connor has continued to find ways to teach new generations about government through her website iCivics.org and the Sandra Day O’Connor Institute.

Notable physicist and astronaut Sally Ride—both the youngest astronaut to have traveled in space and the first female American to do so—was also a Girl Scout. She served on investigative boards for both the Challenger and Columbia disasters and, after leaving NASA, went on to write (or co-write) seven books and found her own company—all aimed at encouraging children and youth, particularly girls, to get involved in science.

And lest I focus solely on the older generation, here’s a much younger former Girl Scout: Taylor Swift. Despite her staggering popularity and youth, Swift has time and again been recognized for her philanthropic efforts. She routinely donates to arts education, local symphonies, and children’s literacy organizations. Swift has also been at the forefront of natural disaster relief efforts, donating both her money and time. She is an outspoken and vocal advocate for giving back and giving to those in need.

The Girl Scouts is not perfect; none of us are. But the organization teaches principles that make stronger, more aware women. The Girl Scouts supports women of faith and pushes girls to strive to make the world a better place. If we have such a problem with their inclusivity that we can’t see that, maybe it’s time to look inward and examine our own motives.

As for me, I stand with the Girl Scouts.