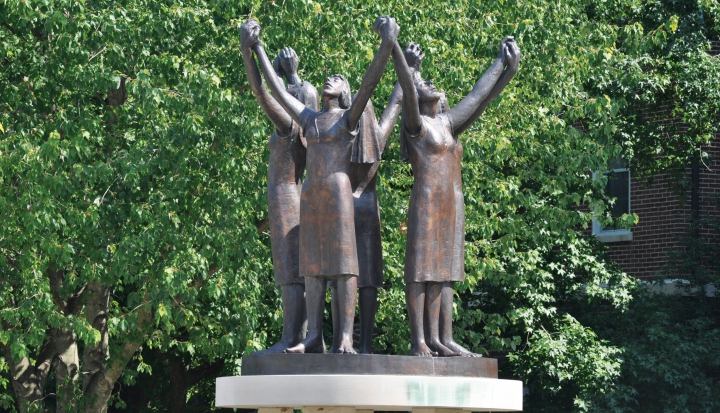 Each time I read a story about someone running into a burning building to save another person, I ask myself: Would I have the courage to do that? The fact is that if I had the time to weigh the consequences, I probably would not act. Concern for my own well-being would likely overwhelm me, which is why I am filled with awe by the example of five brave women who definitely had the time to reflect on their actions yet refused to back down in their service to the poor, even though it cost them their lives.

October 2012 marked the 20th anniversary of the deaths of five American missionary nuns, members of the Adorers of the Blood of Christ (A.S.C.), then based in rural Ruma, Illinois. They were killed in Liberia, Africa, early in that country’s gruesome 14-year civil war.

Sisters Barbara Ann Muttra and M. Joel Kolmer were the first of the five to die on October 20, 1992, ambushed in their car as they attempted to help one of their mission workers safely back to his village amid intense rebel fighting in their area. Three days later, as they agonized over the fate of their two missing sisters, Sisters Kathleen McGuire, Agnes Mueller, and Shirley Kolmer were shot to death in front of their convent by rebel fighters supporting guerilla leader Charles Taylor, who would go on to rule Liberia. Their mutilated bodies were left where they fell.

In the end, more than a quarter of a million people would die in a brutal civil war that did not distinguish soldier from citizen. The blood of these five noble women is now part of the soil of Liberia, mingled forever with the blood of those they loved and served.

These were not young women; all were in their 50s and 60s. All but Kathleen had been missionaries for years. Barbara Ann, a nurse and the oldest at 69, had been one of the earliest Adorers to set foot in Liberia in 1971. Agnes, also a nurse, helped out at the clinic, but like Shirley, Joel, and Kathleen she was also an educator.

When I think of these gentle women surrounded by violence, starvation, and death, I ask myself why they did not flee, ill-equipped as they were in the face of rifle-toting rebels who threatened them almost daily. In my heart I know the answer: They loved the people of Liberia, who had become their people. They knew they were desperately needed by those who might otherwise starve or die.

Even so, in August 1990, as the fighting in the countryside grew worse and anti-American sentiment intensified, the Adorers then in Liberia were forced to abandon their work and flee to the United States. In all, five sisters, including first cousins Shirley and Joel Kolmer, were evacuated from three mission sites. When a cease-fire was established the following spring, several of the sisters lobbied hard for a return to Africa, ultimately convincing their provincial and their families to let them resume their sacred work.

The first to return were Shirley and Joel, sent ahead to begin repairs to their home in Gardnersville outside Monrovia. Bullet holes in the walls and a bathtub still red with blood attested that, for a time, something evil had taken up residence there. But personal misgivings were no match for the certainty that they were desperately needed in Liberia.

Ramona Chebli is a former aspirant to the Adorers who fled Liberia with Shirley and Joel in 1990; she now lives in the United States and holds an advanced nursing degree. She sees the sisters’ return to Africa in 1991 as an expression of love for the Liberian people and the wider church. “My life was enriched from knowing and living with the sisters,” she says. “I have taken on some of their characteristics without even knowing it. My love and gratitude to them is immeasurable.”

For me, of the five, Barbara Ann’s is the most dramatic example of selfless love. Just a year earlier, she had been diagnosed with ovarian cancer. She returned to the United States for an operation, proclaimed herself “cured,” and rushed back to the mission as soon as she was physically able.

The reality was that her disease continued to progress, yet she did not let it dampen her fire or slow the arduous trips into the back country to bring food, medicine, and medical care to the starving residents of villages cut off from what little civilization still existed in Liberia. She was harassed by rebel forces, threatened, accused of being a CIA spy, and even held captive for a brief time. In a letter home she thanked God that she had so far been “spared from the gun.”

Barbara Ann is a reminder to all of us that life should be lived until the very last second, that the time we have on this earth is finite, and that if we are serious about leaving it a better place than we found it, we had better get moving. Her life made manifest Jesus’ words, “Whatever you did for the least of these . . . you did for me” (Matt. 25:40).

Even though Shirley, Joel, Agnes, Barbara Ann, and Kathleen were likely often afraid, they made the holy choice to stand until the end with the dispossessed of Liberia. Would I have had the same courage? I assure you I would not.

Barbara Pawlikowski is a freelance writer who lives in Evanston, Illinois.