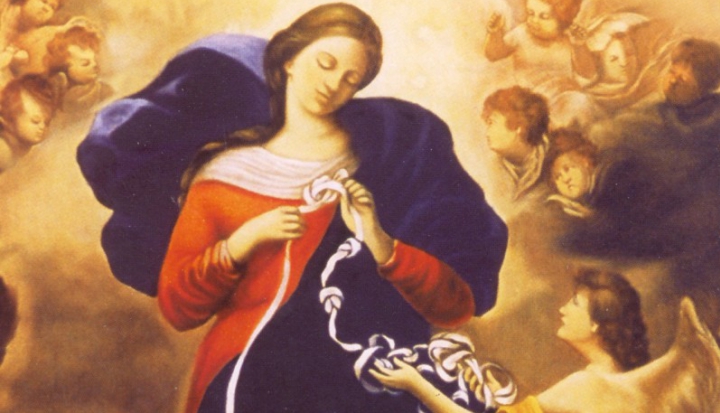 It was time to call in the big guns—Mary, the mother of God, and some industrious cherubs. I’d been wrestling with several impossible problems. Talk therapy worked to a degree. But certain issues are beyond copays and conversation. As a manager, I distributed work to capable employees, and I now imagined turning my personal issues over to celestial coworkers.

I found the best helper in Mary Undoer of Knots. This is an image of Jesus’ mother surrounded by angels, all of whom are untying the knots of earthly problems. This image—and the prayers inspired by it—have been making the rounds in Catholic circles, partly because it’s a favorite of Pope Francis. When the pope visited Philadelphia, a temporary Mary Undoer of Knots grotto was erected in his honor. This wire-frame structure was strewn with strips of cloth, on which people hand wrote their trouble and tied knots into the fabric. The pope blessed the grotto, and invited visitors to add their own knotted cloth while untying someone else’s.

The original Mary Undoer of Knots artwork is an oil painting on poplar wood, created by a German artist in the 1700s (some accounts describe the painter as anonymous, others credit Johann Melchior Georg Schmittdner). In the image, Mary holds a knotted ribbon in her hands and, with a look of great ease, slides her fingers through the heart of a triple-tied knot, teasing it loose. Meanwhile, angels surround her, making up a celestial assembly line. One feeds her a length of knotted fabric from the right. Another guides away the untangled ribbon from the left.

At first glance, Mary and her busy band of angels may appear a bit saccharine in their Baroque style. Mary’s regal blue robe billows like a hero’s cape or a supermodel’s scarf. Stars encircle her head, and a dove representing the Holy Spirit and its wisdom floats just so at the top center. It’s all very stylized and perfect. And yet I find great comfort in seeing this all-star superhero team making short work of my problems.

There are earthy elements of the painting that escaped me at first glance—these suggest Mary is not that far above, or away from, the knots we all face. While Mary is indeed elegant, she’s also got one ladylike leg in the muck of life. This moxy Mary effortlessly tamps down a serpent’s head with her foot like it’s nothing at all. Serpent under control, check. Knots that seem as deadly as a snakebite—yep, she’s got that, too.

Just below Mary’s feet and the serpent is a simple scene that many of us might relate to. A stooped, beleaguered man is walking through a dusty land—perhaps Psalm 23’s “valley of the shadow of death.” Ahead of the walker is one mean mountain to climb. This person is accompanied by a winged angel—one who’s walking beside him, directing him forward. And there’s a dog, too. Because isn’t it always good to have a companion that will patiently serve as a guide but also, on occasion, jump up and lick you and want to play? This scene is not far from Mary. As if she is part of it, too. 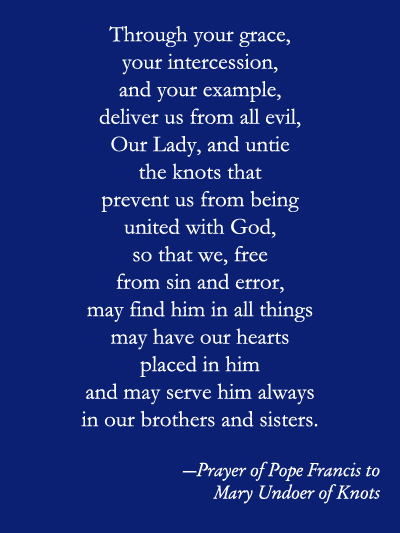 At some point between the 1700s and our time, someone wrote a novena meditating on the Mary Undoer of Knots painting. (For many of us Catholics, novenas are prayers we might remember our parents or grandparents saying. They represent a nine-day commitment to pray intently in some prescribed fashion.) In this novena, a daily rosary incorporates prayers to Mary. The prayers speak of Mary’s knowledge of our problems, her compassion for us, and her closeness to us.

There is another part of the novena that is a huge relief—the handing over, the believing, the knowing your problem is being dealt with. Sometimes I feel the urge to micromanage. Again, I think of those times when, as a manager, I gave assignments and then interfered with the details of execution. But just as I was wrong in that office dynamic, I would be wrong to interfere with Mary’s work, checking in on her multiple times a day.

For certain people—feminists or victims of crimes—there are elements of the painting or novena that might be justifiably off-putting. The Mary Undoer of Knots imagery is based in part on a reflection by Saint Irenaeus, that “Eve, by her disobedience, tied the knot of disgrace for the human race; whereas Mary, by her obedience, undid it.”

And the daily novena starts with an act of contrition—that prayer used in confession and elsewhere to admit our follies. If you’ve come to the novena with the intention to pray for a great injustice done to you, it may not feel right to first admit your own fault. There are also other points through the written novena that require noticeable finger-pointing at one’s self.

In my case, though, neither of these points proved troublesome. I often take the attitude of “take what you like and leave the rest.” And in my case, indeed I have played a role in the tightest knots in my life. Since it doesn’t appear that any others who I feel caused my knots are about to admit responsibility first, I’ve figured it can’t hurt to take a clean sweep of my own soul and hand over the knots. And it hasn’t.

The image of Mary undoing knots has resonated even with non-Catholic or secular friends. It’s deeply reassuring to think a maternal figure is loosening knots that were pulled impossibly tight. It calls to mind a grandmother, who lovingly crochets blankets for the family and sometimes has to quietly, patiently undo the knots in skeins of yarn.

While my problems have not completely disappeared through the novenas, the strangling effect they have had on me certainly loosened. I can more clearly see which angles to take to solve knotty problems—as if I’ve been given a cheat sheet to a Rubik’s cube puzzle. I can draw on and reflect Mary’s patience and ease as I confront elements of my problems. And through the repeated saying of the prayers, Mary has come to serve as a touchstone in daily life when new knots arise. Indeed, she was the big gun I’ve needed.