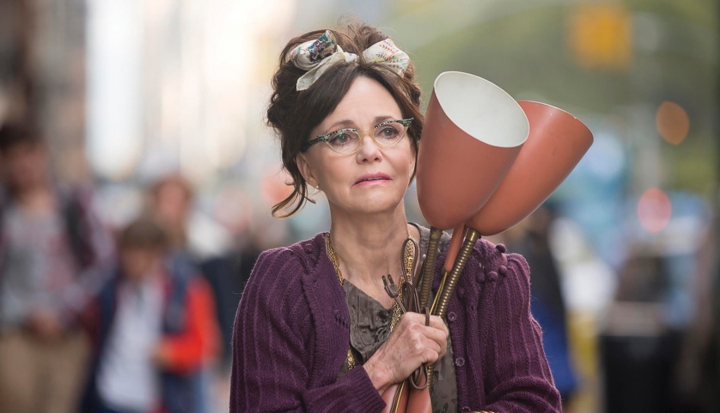 Audiences like Sally Field. They really, really like her. And in her new film, Hello, My Name Is Doris (Roadside Attractions, 2016), she is poignantly human, wonderfully funny, and enormously touching. While she is on the screen, which is nearly constantly, there is nowhere else to look.

Field is delightful to watch, but what is not delightful to witness is the cultural assumption, central to the premise of the film, that a young man’s attraction to an older woman is ludicrous. A May-December romance in which the woman is December is so socially incomprehensible that the mere hint of sexual energy between a woman of a certain age and a man who isn’t marks a film as quirky and eccentric. An older woman with a younger man? It’s almost science fiction.

And yet, James Bond has been played by 57-year-olds David Niven and Roger Moore and 49-year-old Pierce Brosnan, and no eyebrows elevate when Bond wears a 25-year-old on his arm. They are, after all, Bond “girls,” not “women.” Much media noise was made over the shocking plot development in the latest Bond film, Spectre, when Bond (Daniel Craig, 47) romanced a woman (Monica Bellucci, 51) who was four years older. Of all the things James Bond has ever done, surely this cannot be the most morally reprehensible.

Online culture magazine Vulture charted the ages of actresses playing romantic interests alongside leading men from Denzel Washington to Liam Neeson and uncovered a consistently broad age difference of one to two decades. Heroes can mature, but their onscreen loves must be played by women in their early 20s. The one exception is Tom Hanks, who is commonly within 10 years of the age of his costars—perhaps one reason audiences find him admirable.

One of the most remarkable moments in Hello, My Name Is Doris occurs when Field meets her young love interest, John (Max Greenfield), in an elevator at work. Doris is supposed to be about 60 (Field is 69), John in his mid-30s. Doris is a worker bee in a cubicle; John is a rising star new to the company. Doris is a hoarder who lives with her mother and dresses as if a thrift shop exploded in her closet. John is a loft-dwelling hipster who does something extraordinary: He notices Doris and treats her as if she was worthy of his attention.

Kindness from a young man to an older woman is so thoroughly unexpected, in both reality and the cinema, that the audience sighs at this exchange. In film and television, cameras typically linger on youthful female bodies, but barely register women beyond menopause. Such women are invisible, and yet this not-all-that-young man sees Doris and manages to recognize the value of human life in something as culturally unattractive as a woman over 50.

What is revealed here is the nearly unchallenged attitude that a woman’s highest value is her body. The most admired achievement for a woman is to be physically attractive to men. Nothing else she can do—bring about world peace, raise compassionate children, organize a social justice movement—can incite such esteem.

Older men with younger women are so common in film and television as to rarely be remarked upon; reverse the genders, and women are portrayed as predatory and creepy cougars for doing precisely what men their age are also doing. The best an older woman in love with a younger man can hope for is to be a running joke.

The gender inequity is blatant and crude, the ageism ignorant and shallow. And another dark message is buried here: the idea that humans are most valuable when they are physically attractive. The media’s concept of beauty tends to be white, thin, young, wealthy, and, often, empty-headed. The media concept of love is skewed to make men think they can have anyone they want and make younger men think they can count on that promise in the future. And tragically, the media concept of what women should dare to hope for—and when women should have the good grace to give up—is harshly limited.

As Doris, Sally Field is meant to be pitiable. She isn’t 25 any more, doesn’t date, and has a cat. But Doris is fierce and funny. She dares to have vital friendships. She is a devoted caregiver and aspires to improve her life. She takes phenomenal social risks that would make a firefighter’s knees quake. By the end of the film we come to think of her as brave, but wasn’t she always? After all, it takes a certain amount of brio to dress like a box of melted crayons, and she does it, by gum.

Surely the miraculous nature of love is that it transcends all impediments humans put in its path. Differences in nationality, religion, gender, and race may offend some sensibilities, but the heart has historically ignored these. True love does not happen only to pairs that assemble themselves to fit social scripts. What is compelling and engaging about human beings is not how they look to the eye, but how they touch the heart or excite the mind or soothe the soul.