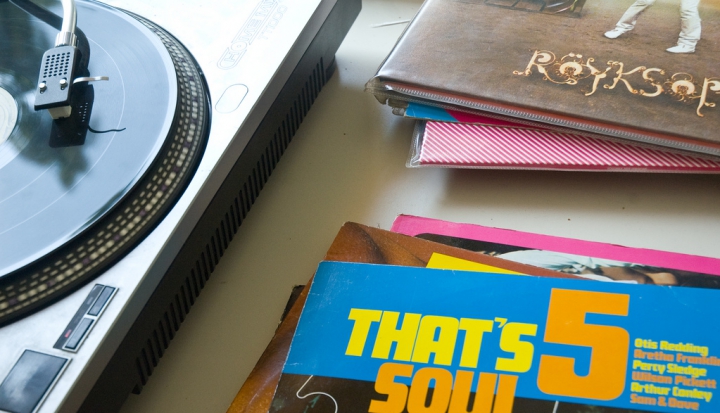 As a kid with three much older siblings, I was introduced to a wide variety of music at a young age. When I was 11 and my sister was 16, we spent a summer stripping wallpaper and painting our bedroom to Tom Petty and the Heartbreakers. My other sister took me to Red Rocks Amphitheatre to see musicians like singer-songwriter Tracy Chapman, and my eldest brother often made me mixtapes.

I remember lying on the carpet in the living room, as my sisters played Jay Ungar’s “Ashokan Farewell” on their violins for my dad, his favorite song. I watched as tears rolled down his cheeks and I understood how music could take us to the “thin places,” places where the distance between heaven and earth collapses and we experience something of the divine.

My mother, who taught me to love Jesus, sang my little brother and me hymns and Joni Mitchell songs before we went to sleep, songs like her rendition of “Abide With Me” and “The Circle Game.” Hearing a voice you love singing alone in the darkness, well, that’s a “thin place” too.

As I got older, music became even more a part of my spiritual life, though I wouldn’t have described it that way at the time. I worked as a DJ for two radio stations in college. I liked The Shins and Lauryn Hill and Jay Z, but songs about God always seemed to creep into my late-night sets. Songs like “Don’t Let Me Explode” by The Hold Steady, or “There’s a Light” by Shirley Ann Lee. I once had a trucker call in to tell me to cut it out and play some Led Zeppelin. (So I did.)

Music can be a way into wonder, because it makes us come up short. Sometimes something happens in a song that we can’t rationalize or explain. We can only stop and listen. Even when I felt very far from God, I liked to hear Sister Wynona Carr’s “A Letter to Heaven.” When she sang with her powerful and gravelly voice, “Dear Lord, I’m your child,” it was like hearing that truth for the first time.

To some, it might seem strange that music and singing have played such a big role in my spiritual life. I’m a cradle Catholic, and the Catholic Church in the United States—in my view—is bad at music. (There are exceptions; “Be Joyful Mary” comes to mind. Still, at the moment we aren’t exactly known for our choirs or hymnody.)

In the letter to the Colossians Paul exhorts us to “sing psalms, hymns, and spiritual songs to God” (3:16). The Mass is full of singing and hymns; indeed, the entire Divine Liturgy of the Eastern Church is sung as well as in monastic communities. So why do many American Catholics have an uneasy relationship with singing and music?

In his book, Why Catholics Can’t Sing: The Culture of Catholicism and the Triumph of Bad Taste (Crossroad Classic), Thomas Day looks to our history for an explanation. He writes about the persecution of the Catholic Church in Ireland and how, as a result, Masses went underground. People stopped singing at them entirely so as to not draw unwanted attention from English soldiers. Irish Catholic immigrants to the United States brought with them this silent, low Mass, or recited Mass.

What’s more, after the Second Vatican Council, the Mass was translated from Latin into the vernacular. So Latin choral music and chant, much of it easy to sing and remember, was replaced by hymns, sometimes written in haste for the new Mass. Some of these hymns, like “Amazing Grace” and “For the Beauty of the Earth” (which we borrowed from Protestantism), were easy to sing and remember, but others less so. Vatican II emphasized the “full, active participation” of the assembly, but the new music often drew a negative reaction from those Catholics who didn’t like the change or didn’t know how to sing the new songs. Sadly, many opted out.

Music and beauty are essential. Singing together eases our grief and increases our joy. We sing to our babies. We sing before and after receiving the Eucharist. We sing at gravesides and in the car. We dance at weddings and while doing the dishes. Music engages our whole bodies and brings us into what the 18th-century Jesuit priest Jean-Pierre de Caussade called “the sacrament of the present moment.” We dance, we breathe, we are grieved or encouraged, together.

Sacred music can also be a way into meditation. When Catholics think of prayer they tend to think of a conversation, but words are not the only way to communicate. Often words even get in the way. When I pray aloud I sometimes feel like it’s one-sided. Like the words are coming from my head, not my heart, and it’s easy to get in the habit of just asking for things rather than listening, expressing gratitude, or being open to God.

Scripture says, more than a thousand times, that prayer ought to come from “the heart,” but in the rush of the day, how do we connect?

Pope Francis put it this way: “The Lord tells us, ‘the first task in life is this: prayer.’ But not prayer of words, like a parrot; [rather] the prayer [of] the heart, gazing at the Lord, hearing the Lord, asking the Lord.”

Even repetitious prayers, like the rosary, are a kind of meditative song. They’re intended to help us enter into a contemplative state, where the words fall away and the heart is opened. But if rediscovering some of our ancient liturgical music and chant can deepen our prayer life, contemporary and popular music can do just as much to help us learn to pray from the heart.

The pop idiom is full of songs about a yearning for God, forgiveness, heaven, or redemption. Some of my favorite pop songs are love songs, and many of these love songs are written, in part, about the “Creator of the Stars of Night” (to steal the title from a Marty Haugen song). Think: “My Sweet Lord” by George Harrison, “Jesus Gave Me Water” by Sam Cooke and The Soul Stirrers, “New South Wales” by Jason Isbell, or “Family Bible” by Willie Nelson. In fact, most genres of American pop (rock, rhythm and blues, hip-hop, soul, and country, for starters) have roots in the Protestant church.

When my kids are impatient for dinner and it’s still not time to eat, I sometimes distract them with a dance party. We listen to classic rock, dance, soul, hip hop, and alt-country, but songs about God naturally slip into the rotation: “Come Thou Fount of Every Blessing” (performed by Sufjan Stevens), “Give Me Jesus” (Sara Watkins), “Christ is My Hope” (performed by The Innocence Mission), “Sunday Candy” (Chance the Rapper), “From this Valley” (The Civil Wars), or “Kyrie” (Emmylou Harris).

Anna Keating is the co-author of The Catholic Catalogue: A Field Guide to the Daily Acts That Make Up a Catholic Life. She co-owns and lives above Keating Woodworks, a handmade furniture studio in Colorado, and is a college chaplain. You can find more of her writing at thecatholiccatalogue.com.