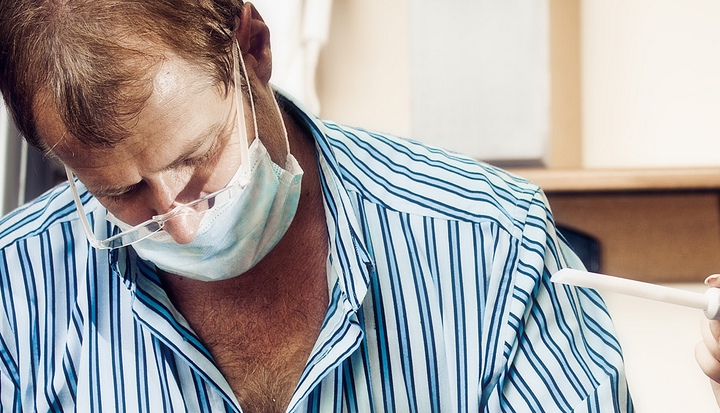 I have philosophical conversations with my dentist while he cleans my teeth. It’s no small task to attempt to be profound with a hook in your mouth, but Dr. Abe is above all a terrific conversationalist, so I accept the challenge. The son of Holocaust survivors, he was born in Israel but raised in Brooklyn, a couple neighborhoods over from mine and about a generation earlier. Dr. Abe is passionate about everything from cutting-edge medical advancements to the latest miseries of the New York Mets. I have never had a boring conversation with him. It is strange to say, but I even look forward to my cleanings.

During my first visit, Dr. Abe told me that he was a prostate cancer survivor. The diagnosis, he said, had made him eager to learn and grow as a human being. Sometime later, his ever present openness allowed me to share with him the grief I felt when my wife suffered a miscarriage. The cleaning, ever gentle, was particularly so that day.

Dr. Abe and I have always been frank with one another. I’m not sure why. It can’t be simply because we both grew up in pregentrified, working-class Brooklyn. It’s an inexplicable thing, such immediate personal connections, but when I’ve experienced them, they make me feel that life is well worth the living.

That brings me to my most recent cleaning. As always, Dr. Abe asked how I was doing. He knew from my last visit that my 70-year-old mother had been diagnosed with lung cancer and would be having the mass removed surgically. He also knew that my father had been dead some years, a coronary victim of his alcoholism.

“Doc,” I said, “she died of an infection six weeks after the surgery. She never left the ICU.”

He looked at me, this good and compassionate man, for some time without speaking. Then he said, with eyes brimming with understanding and connection, “I’m 62 years old, and I have both of my parents. How many people my age can say that?” And I, at 41, knew I could tell him, this son of Holocaust survivors, of the injustice I felt.

He asked me what I had told my kids, who were ages 6, 2, and just 4 months old on the day my mother died. I said I was lucky that my oldest was in Catholic school, because an understanding of death is built into daily life there. I told the kids what I understood about heaven, but mostly of how awfully I missed my mother. He said he had relayed something similar to his young sons when his mother-in-law died years earlier.

After a time Dr. Abe, who is actively involved with his synagogue, admitted that the injustice of the world often poured down and wore away the rock of his faith. He recalled an uncle who, before the war and the Nazi death camps, had studied to be a rabbi but then put that behind him. Dr. Abe once asked him why he stopped his studies. The uncle told him, “Because I’m mad at God, that he could have let this thing happen to our people.”

This man had lost his entire family in one of the most barbaric systematic acts in human history. It was an indescribable injustice. And I had lost both of my parents. My youngest child was born just two weeks before my mother’s diagnosis. The whole point of the operation had been to save her life. Injustice.

Six million Jews. A small woman who had saved her children from an alcoholic’s abuse. Injustice writ large and small.

“So often my heart wants to believe, but my intellect doubts,” Dr. Abe explained.

“Because of your uncle?”

“Yes, and because of my mother. Every time I say I’m coming down to Florida to visit her, she says ‘God willing.’ And I just want to yell, ‘God has nothing to do with it!’ ”

I thought about this as I rinsed. “But your uncle didn’t say he didn’t believe in God, just that he was mad at God.”

“True. As you would be mad with a close friend.”

I’m not sure how great my cleaning was that day. From that point we started tripping over one another’s ideas. Was the opposite of love not hate, but indifference? My mother would have thought so. She often said you only fought with people you cared about; otherwise you wouldn’t bother. His uncle was angry and therefore somehow still involved with caring about God. We both thought this idea was valid. We also both agreed that the idea of fate was invalid; that the 6 million Jews had to die, that my mother had to die.

But the idea of free will—a series of choices enabling such things to occur—was more valid. After all, he and I were only alive despite, and because of, the free will of others: he despite the Nazis trying to kill his parents; me because my mother found the strength to protect her children from her husband’s wrath.

We talked about many other things that day: the fact that Israel exists in spite of Hitler’s efforts to destroy the Jewish people, that the holy books are based on authority and many things in them were described by eyewitnesses to the events, that belief in them was not very different from accepting the scientific certainty of evolution or heliocentrism—other widely accepted beliefs that no living human being has witnessed firsthand.

Yet the core of our conversation was centered on injustice. What is injustice? Where did humanity’s sense of it come from? How can we all feel it and accept, almost universally, that certain things are unjust? How is it possible that most human beings are sure that certain acts—genocide, murder, rape, robbery, premature death—are wrong, regardless of cultural backgrounds?

Injustice, Dr. Abe and I felt, can’t simply be a chemical reaction or a biological imperative. Injustice is something felt deep in the human soul, even in times of great doubt when there’s no logical reason to hope for true justice.

In Matthew’s gospel, Jesus warns his disciples of some of the injustices they will encounter when they go out into the world, but he tells them not to be afraid. “Are not two sparrows sold for a small coin? Yet not one of them falls to the ground without your Father’s knowledge. Even all the hairs of your head are counted. So do not be afraid; you are worth more than many sparrows” (Matt. 10:29-31).

It seems we are nearest to God when we ask why injustice can happen. In these moments we see the world closer to the way God might see it—so far from the ideal he intended it to be. In these moments of raging injustice, we’re still asking God to help us understand, even in our seeming disbelief, why he allows the sparrow to fall.

Christopher Mari is a freelance writer and editor based in his native New York City.