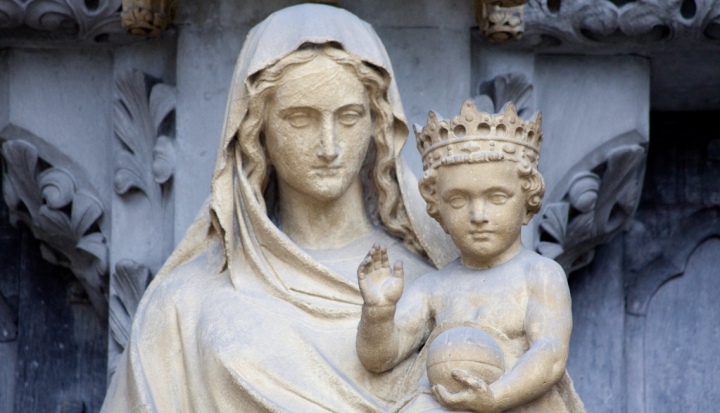 In recent years a number of religious thinkers have begun to speak of Mary as the feminine face of God. Whether they appeal to the history of religions, to psychology, to the Christian history of Marian piety and theology, or to current Latin American and Hispanic devotional practices, these thinkers seek to remedy one of the problems of male-dominated religion by stating that god has a feminine dimension, which is made known through Mary.

The basic argument goes like this. God has both a masculine and a feminine side. In the incarnation, the divine masculine side is revealed in Jesus Christ, in his preaching and mighty deeds and his love even unto death. Being male, however, Jesus could not fully express through his human life the divine feminine side. Thus divine feminine characteristics, such as mothering and nurturing and being intuitive and sensitive, become clear in Mary, his mother. She functions as the maternal face of God turned toward the world. The honor that people give to her allows the feminine to enter into their religious consciousness. Since the source of this femininity is in God, a balance is introduced into what would otherwise be an overly masculinized view of the divine.

While I thoroughly disagree with this approach, it does have two appealing points. For one thing, it gives a positive religious value to qualities such as mothering, compassion, and nurturing and even seeks to root them in God. This is in welcome contrast to a long tradition that disparaged such women-associated characteristics and saw them as lesser in value or even as negative when compared with so-called masculine traits of reason, justice, and rendering judgment.

A second attractive part of this theory is how well it enables one to interpret traditional Marian piety. The post-biblical image of Mary has borne a wealth of divine qualities, so that in devotion to her as the approachable, powerful Mother of Mercy, who would not let one of her children be lost, whole generations and cultures have experiences divine saving power in a female configuration.

This figure of Mary indeed possesses characteristics very akin to the God whom Jesus called Abba. But while the official symbol of God in a patriarchal church remains Father, Son, and Spirit—and thus at least subliminally masculine—there is compensation in turning to this female figure who knows about birth; is not overly disturbed by human weakness; expresses a different, consoling, and even subversive world of powerful, merciful care.

Why, then, oppose the idea of Mary as the feminine face of God?

The positive parts of this theory are more than outweighed by the damaging effects it has on the doctrine of God, the true reality of Mary, and the effort of women and men today to form a community of the discipleship of equals. The major objections to the idea of Mary as the feminine face of God follow:

1. This theory stereotypes masculine and feminine characteristics, and therefore also men and women. I do not deny that there are real differences between the sexes. But the traditional categories by which differences have been defined took shape in a patriarchal culture and are marked by a powerful prejudice. Who is to say that women are not capable of a full measure of rationality while remaining women? Who is to say that men are not capable of powerful nurturing while still remaining men?

At this point of cultural change, to describe character traits as masculine or feminine simply short-circuits the quest for wholeness on the part of both sexes. It also carries a strong political subtext. The supposedly feminine traits are designed for domestic and not public spaces, and this has the effect of maintaining women in subordinate roles. The entire use of masculine and feminine categories within a dualistic framework is not liberating.

2. This theory does not resolve the basic problem of male-dominated imagery for God, but ultimately leaves it intact. Since Jesus is the Word made flesh and Mary isn’t, the lion’s share of interest and value still goes to the masculine characteristics. God remains masculine, only now with a kinder, gentler side.

3. This theory delivers an image of God that is actually more dangerous to women’s equality than the old, more obviously patriarchal image. The basically masculine idea of God becomes more benevolent when given feminine dimensions that take the hard edges off. Now, the image of God is not neutral but functions as a source of what a religious community values most highly. Thus this benevolent divine image, made more acceptable by feminine traits but still essentially patriarchal, actually functions to justify the priority of male rule while blocking women from full participation.

4. This theory forgets that all language about God is analogical, that is, indirect or symbolic. Words about God, while true, nevertheless are not to be taken literally, as if we had captured God in the net of our concepts. Rather, they point us in the direction of divine mystery in whose life we participate.

To speak about God having masculine or feminine dimensions—one revealed in Jesus, the other in Mary—ignores the nature of religious speech and makes sex in God truly real. I would argue that God does not have dimensions in any real or significant sense. Scripture speaks about God as a mother bird and a mother bear, but this does not mean that God has an animal dimension nor does calling God our rock imply that God has a mineral dimension. Rather, the one triune God is an unfathomable mystery of love about whom we speak using the excellences discovered in creation.

Since being woman is an excellence, we can speak about God in female images in as adequate and as inadequate a way as we use male ones. Cosmic images, such as light, are also possible. But in no case are we describing a dimension of God. Rather, the whole of God is being pointed to through the use of a symbol rooted in creation. But to speak of a feminine dimension of a masculine God is to transfer to infinite, holy mystery the limitations that belong to the created world.

5. Finally, this theory is filled with problems for ecumenism because it promotes a maximalist approach to Mary that Protestant Christians find a violation of the gospel. In a sense it confirms their worst fears and provides justification for the fact that Catholics worship Mary or put her in the place of Christ or even God.

The religious thinkers who are arguing for Mary as the feminine dimension of God are trying to remedy an admittedly over-masculinized idea of the divine. Marian images serve as compensation for the core male images of king, lord, and father. But compensation is only a partial remedy. What is needed is attention to the core itself.

Why are the predominant images of God so masculine? Why do even atheists, who do not believe in God, say that they do not believe in “him”? God is neither male nor female but source of both in the divine image and likeness. The fact that masculine images predominate reflects the social situation of male rule in which this religious language took shape. While it is legitimate to speak of God in male terms—men also being made in the image of God—the exclusive use of male images is a distortion and leads almost to idolatry and serves to justify women’s subordination.

If we clear up the distortion at the core, there will no longer be a need for compensation. If we think about the holy mystery of God in terms that are equivalently male, female, and cosmic, then Mary will not have to function to supply the missing feminine dimension.

Because within patriarchal church structures the figure of Mary has indeed borne characteristics that are fundamentally divine, the proper strategy would be to return these trains to God where they belong.

We then could speak about God in female terms that the Marian tradition has guarded: as the all-compassionate presence; Mother of Mercy, our life, our sweetness, and our hope; and the one whose renewing energies bring forth the springtime, console the brokenhearted, protect ordinary people, save the sinner, and liberate the oppressed. Relieved of the role of compensating for an all-male God, Mary would be free to rejoin us in the community of Jesus’ disciples, the communion of saints.

Contemporary methods of readings the gospels give us diverse portraits of Mary as she was perceived in the early Christian communities. While the Gospel of Mark’s portrait is somewhat negative, placing her outside the circle of those who understand and follow Jesus, Luke’s portrait is highly positive. In Luke’s gospel, Jesus blesses Mary as one who hears the word of God and carries it out. From the annunciation, visitation, and birth scenes to Mary’s post-resurrection presence in the upper room awaiting the Spirit, her life is perceived as a “pilgrimage of faith” (Vatican II’s term). The historical Miriam of Nazareth was a Jewish woman of faith, a true disciple.

Nor was her journal through life easy. A marginalized, peasant woman, she lived under the military rule of a foreign occupying power. Weathering an irregular pregnancy, she had to give birth under precarious conditions far from home because of the decrees of the powerful state. She had to flee as a refugee with her baby from the murderous intent of an evil king. She struggled to understand her precocious firstborn and joined her husband in the search for her son in Jerusalem. Faithful to his prophetic ministry, her son was cruelly put to death by Roman soldiers, casting her into what we may legitimately surmise was an agony of loss.

Through it all she clung to her God in hope, a stance expressed in the great song placed on her lips by Luke. In the Magnificat (Luke 1:46–55), Mary prophetically announces the victory of God who reverses the fortunes of the rich and poor and sides with the hungry in their need for food. She not only joyfully acclaims this but also embodies God’s favor in her own life story. For it is precisely this woman, one of the little people of the earth in terms of social, political, and religious power, for whom God has done great things as symbol of the redemptive promise for all.

Mary’s unique historical role as the mother of Jesus—so central for the entire story of salvation—does not remove her from the circle of faith-filled ones. She is not an archetype, nor an ideal, nor a feminine dimension of anything. She is her own person with her own life to live.

Her journey of faith and joy in God were lived out within the framework of historical vulnerability and limitations. She is, in the words of Pope Paul VI, “truly our sister, who as a poor and humble woman fully shared our lot.” In communion with her, the community of disciples today may find courage for our own journey of faith.

This article was orginally published in the April 1994 issue of U.S. Catholic.

TagsMary Theology Women in the church

Elizabeth Johnson, C.S.J. is a professor emerita at Fordham University and the author of numerous books, including She Who Is: The Mystery of God in Feminist Theological Discourse (Crossroad, 1992).