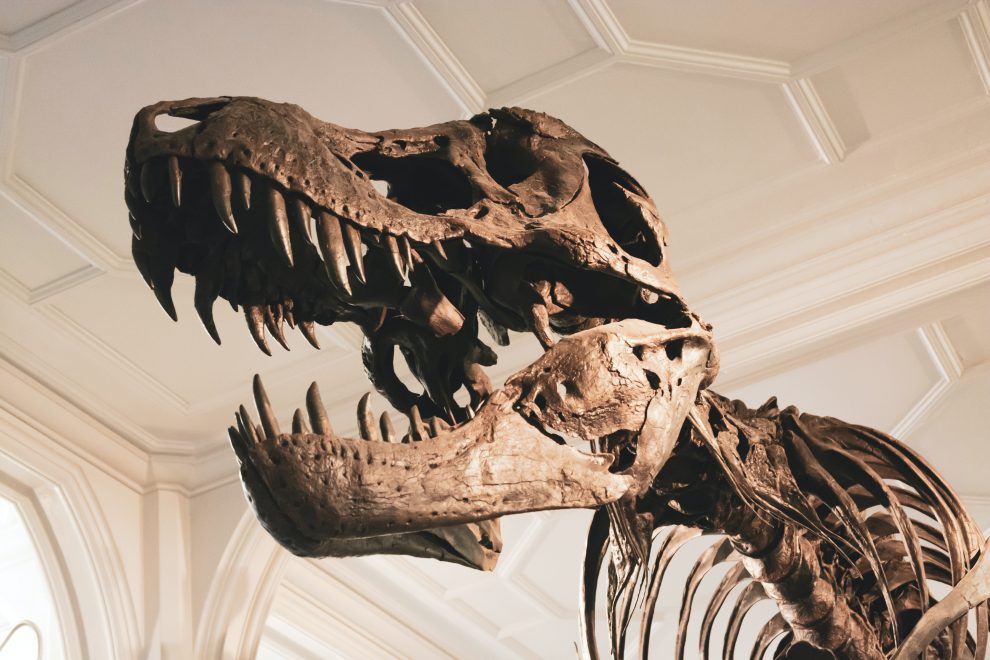 On a cold, overcast December day, I found myself taking in with delight the natural world of millions of years ago during a visit to Pittsburgh’s Carnegie Museum of Natural History. I had a case of what I call “discernment blues,” though perhaps the official Ignatian term is desolation. There had been several deaths in the community in which I live, my grandmother’s health was declining, and several close friends were leaning on me for emotional support. I missed my old life in Miami—my service there as a legal assistant to migrant children, the easy camaraderie with my young and energetic colleagues, and the vibrant Latin pulse of city life. A heavy and constant blanket of low-hanging gray clouds over Lake Erie had been obscuring the sun for weeks. The Advent readings and hymns about longing for light in the midst of darkness had never felt so fitting.

“Get away from the motherhouse for a bit,” my vocation director recommended when I shared with her my sense of malaise. “Take a break.”

I knew she was right: I needed a change in scenery and time away from wrestling with those big, thorny questions of what my future held and where God was calling me. So I drove to Pittsburgh and spent the day wandering among skeletons of tyrannosaurus rex, diplodocus, and apatosaurus. I marveled at the enormous fossil of an ancient sea turtle. I walked through the Mesozoic Era and learned about the slow evolution of various species long before mammals were part of the picture.

As I walked through the museum and through the vast history of our planet, I was reminded of words attributed to Oscar Romero: “It helps, now and then, to step back and take a long view. The kingdom is not only beyond our efforts, it is beyond our vision.” Throughout the exhibit, time is measured in mya (millions of years). The tour guide told us that dinosaurs walked the earth for 180 million years. In contrast, we human beings have been on the scene 6 to 8 million.

Human beings—as beautiful and unique as we might be—aren’t the focal point of life on this planet. God’s creation, starting with that initial flaring forth nearly 14 billion years ago, is much vaster than I usually consider. This creation includes myriad species that came before us and—potentially—myriad others that will come after us. Human history is an eye blink of time if you start counting with the Big Bang. And, of course, Earth is one planet in one solar system in one galaxy out of an estimated 200 billion galaxies in this expanding universe. Scientific discoveries continually remind us that God’s awesome creativity—this “magnificent enterprise that is God’s work,” to return to the reflection about “taking a long view”—is mind-bogglingly more expansive than anything we can imagine.

I mulled all this over as I continued the tour through the Cenozoic Hall, and I started to feel pretty small. This experience of the vastness of creation is a gift from the Holy Spirit—an invitation to humility as well as to awe and wonder. My humility is caused by the realization that if all of world history could be condensed into 24 hours, homo sapiens sapiens would come on the scene at just two seconds before midnight. To stretch even further back, dinosaurs (ancient history by our estimation) enter the world scene only at 10:56 p.m. And yet I can’t help but feel awe and wonder at all that has come before us as well as that which may come in the future.

Theologian John Haught speaks of a universe “still aborning,” and Franciscan Ilia Delio writes of “a universe still becoming more” to describe the reality that nature is subject to ongoing creativity. The author of Lamentations seems to have intuited this, writing that God’s mercies are unfailing and new every morning (3:22–23). As I pondered my own next steps in life, the idea of God being intimately and continually involved with creation’s unfolding created a sense of spaciousness within me. I found myself trusting God’s loving hand in the evolution of my own story, as well as the story of all creation—a welcome consolation amid the “discernment blues” of bleak midwinter.

Continuing the tour, I progressed to the skeleton of a moa. These giant, flightless birds from New Zealand reached over 10 feet tall, lacked even vestigial wings, and were hunted to extinction in the 15th century. At first glance, while certainly impressive, they don’t appear to be the most majestic or appealing of birds. And yet even the moa was part of God’s unfolding creativity.

Theologian Elizabeth Johnson speaks lyrically of how God “sings the universe into being.” God, Johnson says, does not create as a painter makes a portrait or a sculptor molds clay—resulting in a completed work separate from the artist. The sculptor or painter finishes the work and can walk away from what he or she has made. In contrast, God creates like a singer produces a song. As any singer knows, the moment the singer stops actively breathing and producing sound with breath, the creation of the song disappears. Creator and creation are intimately intertwined.

We participate in this marvel, this song of creation, through mysterious intimacy with God. This is not to say we are in control—far from it. We are creatures, not creator. We are finite, not infinite. We are limited, not limitless. And yet, our choices matter. Our decisions matter. Our actions matter. I trust that regardless of what choices I make, the God of all creation will meet me with love and faithfulness as I continue to be sung into being each day.

In Consider the Birds: A Provocative Guide to the Birds of the Bible (Abingdon Press), author Debbie Blue challenges us to find new ways of thinking about God as we reflect on creation. She writes about the griffon vulture—a species normally considered unappealing, if not down-right ugly—and how, in 1973, one collided with an aircraft flying at 37,900 feet. That is more than seven miles in the air and the highest ever recorded altitude for any bird.

Might even vultures—or any other species considered less than majestic—reveal something of the Divine face in their uniqueness, their ability to ride air currents and take in the entire world below them?

Might their example extend an invitation to step away from the navel-gazing of my “discernment blues” and see with a broader perspective? I drove along the Pennsylvania Turnpike back to the motherhouse after my day wandering through Cenozoic Hall without answers to the big questions of life’s direction. Yet, somehow, my time at the Carnegie and the reflections it inspired brought some perspective amid the discernment blues that had been plaguing me through those dark December days.

Environmentalist, scholar, teacher, and Passionist priest Thomas Berry often repeated the phrase: “We are not a collection of objects, we are a communion of subjects.” I am only one of nearly 7 billion human beings currently alive in the world. And human beings are present in only a tiny percentage of cosmic history. We are part of a communion of many, many subjects—past, present, and future. From quarks to quails, vultures to vine maples—humans are one strand in an enormous and complex web of God’s creation. Human beings are one piece of that intricate, sweeping song that God is constantly and lovingly singing into being.

Image: by Jon Butterworth on Unsplash