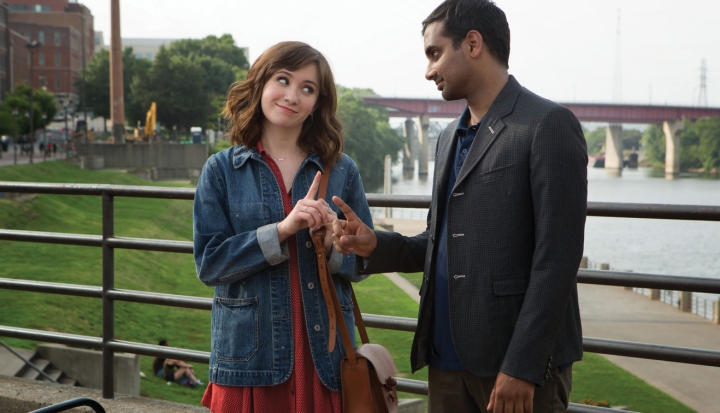 When Girls made its debut on HBO in 2012, critics labeled the show’s creator Lena Dunham the voice of a generation. The response to Netflix’s Master of None has been different, but no less laudatory. The show’s creators, Alan Yang and Aziz Ansari (who also stars as the show’s central character, Dev), have yet to be festooned with that “voice of” crown critics were so eager to give Dunham, despite the fact that their show is far more reflective of America’s racial diversity. I can’t help but blame prejudice against Yang’s and Ansari’s racial identities for the oversight. (They’re both first-generation Americans; Yang the son of Taiwanese immigrants and Ansari, Indian.) Still, Master of None has been far less divisive than Girls, which made some gush with breathy praise and others wrinkle their noses and scratch their heads.

Comparing the two shows is a worthwhile exercise given the similarity of their subject matter. Both are new takes on that “young people making it in New York City” trope à la 1990s sitcom Friends and, to a lesser degree, Seinfeld. Both have a well-known comedian as their central character. Lena Dunham is a director, writer, and actor but in this context—working with comedy legend Judd Apatow—she is clearly wearing her comedian hat. Aziz Ansari’s career began with sketch comedy, then moved to stand-up and acting roles (most notably as Tom Haverford on NBC’s Parks and Recreation). He recently expanded his creative palate through cowriting a book on dating with renowned sociologist Eric Klinenberg. Also, both seek to elevate the half-hour comedy beyond the sitcom take (again, à la Friends).

Both shows are exceedingly self-aware, but only one is self-important: Girls. Ironically, the very show that is said to be representative of a generation is the one that falls so short of doing so. Sure, it’s “provocative,” but mostly in ways that relate to sex—a predictable way to push boundaries. Dunham doesn’t so much challenge her audience with outrageous situational comedy as address their comfort level with ideas once considered too salacious for even cable television. Call me prudish; I just find that boring.

Yang and Ansari’s show actually blows a bit of fresh air into their meditation on sex and dating. But that’s because, as Salon’s TV critic Sonia Saraiya writes, it “has more on its mind than just the ups and downs of dating in the modern era, a worthy but ubiquitous topic. Master of None is about grappling with a specific kind of privilege, and figuring out how to live with it; in that sense, it is the definitive millennial comedy.” (The headline to Saraiya’s essay urges Girls to move over and cede said definitive status to Master of None.)

Saraiya compares Master of None’s Dev to Girls’ central character, Hannah, whom she describes as narcissistic. But Dev is “driven by curiosity and self-aware humor.” I agree, and Dunham’s character, whose self-absorption lacks charm, was a big reason why I could barely make it through the Girls pilot. Dev is not so much self-centered as he is self-aware, which makes him likeable and the show’s humor relatable.

There are two episodes, both early in the season, that illustrate this. In “Parents,” Dev and his Chinese American best friend Brian reflect on the sacrifices their immigrant parents made to create their privileged lives. Dev doesn’t want to help his father sort out an issue with his iPad (a situation to which any of the so-called generation of “digital natives” can certainly relate), while Brian is disinterested in an article his father wants to share with him from The Economist. Both are trying to make it to the movies in time to catch the previews. We’re then treated to a series of flashbacks that put into perspective their parents’ journeys from hardship in their home countries with hardship in the place their sons will call home. Yang and Ansari admit that many of the details of the episode are based on actual events in their parents’ lives. And Ansari’s actual parents portray Dev’s mother and father on screen.

Episode 3, “Hot Ticket,” is an insightful and incredibly funny meditation on dating in the digital age. A startlingly old-fashioned exchange involving the writing down of phone numbers using ink and paper devolves—over days—into a series of texts between Dev and multiple women. Only, he ditches all of them when Alice, who blew him off initially, decides at the last minute to go with him to an exclusive concert. Dev wittily summarizes modern dating, his dry tone adding the important critical commentary, as: “We can be shitty to people; it’s one of the great things about being alive now!”

Ansari has commented that Dev is not the typical hapless-but-lovable man-child (think Seth Rogen’s character in Knocked Up, or Jason Segel in Forgetting Sarah Marshall). Rather than challenging that stereotype, Girls’ Hannah is simply the female version (Judd Apatow, whose films all feature a man-child extraordinaire, is an executive producer of Girls). Dev, however, defies the trope entirely. He’s a truly average guy, in that there is no average guy (at least in the way every predominately white sitcom would have you believe). Ansari’s character and narrative arc reflect what is too often called the changing culture, but perhaps has been this way all along. And the honest, thoughtful—and yes, hilarious—Master of None, shows an America that at once has always been and has never been before: a mix, a mish mash, and a melting pot, all at once. Race is complicated. Dating is complicated. People are complicated. Life is funny. It is complicated. It is old, and it is new. It is worth living, and worth living right.

Or, as Saraiya puts it: “[Master of None] speaks to figuring things out as a process worth doing; even for fools such as us, the titular masters of none.”