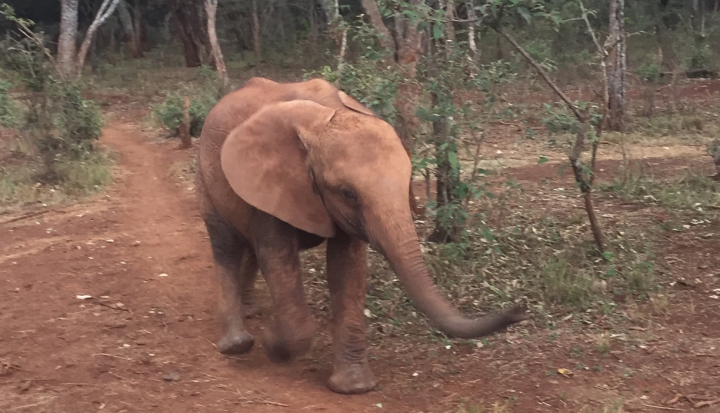 Nairobi, Kenya is a unique and complicated city. A cosmopolitan mixture of traditions and peoples, humans and animals exist in a delicate relationship. Just beyond the outskirts of the city, you will find Nairobi National Park, where lions, zebras, and buffalo roam with the urban skyline looming a few miles away. Nestled on the edge of the park is the David Sheldrick Wildlife Trust elephant orphanage and Kamok, my two-year-old foster elephant.

I adore elephants, and the connection is deeply personal. Elephants never forget. Growing up, my great-grandmother’s house was full of elephant figurines big and small. This love of elephants is intergenerational and deeply spiritual. Visiting Sheldrick, adopting Kamok, and gift-adopting her friend Murit for my sister was my very first outing in Nairobi.

Orphaned shortly after birth, villagers found Kamok alone, weak and unstable, wandering in Ol Pejeta Conservancy in Kenya. Luckily, she was rescued by the Sheldrick Wildlife Trust and taken to the nursery in Nairobi. Today, Kamok is a thriving toddler known for her outgoing and cheeky character. As I watch her eat and get ready for bed, she comes over and reaches out with her trunk.

Unlike most of her friends, Kamok was orphaned by natural causes. Most were orphaned due to human-elephant conflict. Since they are large and communal, elephants require significant land. But they are losing their natural habitat due to human expansion. At the same time, elephants can cause great damage when they wander into rural villages looking for water. As water becomes increasingly scarce, the competition between elephants and humans increases. Climate change actively threatens both poor rural communities and endangered elephant herds.

Despite their size, elephants are extremely vulnerable to human violence. Pope Francis laments that our sister Earth “cries out to us because of the harm we have inflicted on her by our irresponsible use and abuse.” The slaughter of elephants is a prime example. National Geographic estimates that more than 100,000 elephants have been killed by poachers since 2011—all to satisfy sinful human greed and the selfish desire for ivory trinkets. To echo Pope Francis, “We have no such right.” The fate of elephants is tied to the fate of vulnerable communities, as black market ivory is a major funding source for terrorist groups.

Elephants and humans share a deeply emotional and social nature. The bond among the elephants and with their keepers is strong, offering a glimpse of true solidarity with creation. In Laudato Si’, Pope Francis reminds us that “nature cannot be regarded as something separate from ourselves or as a mere setting in which we live. We are part of nature.” As Christians, we have an urgent responsibility to care for all of creation and to learn to live together.

At Sheldrick, the keepers offer a profound and integrated vision for caring for creation. The process of raising baby elephants and reintroducing them into the wild takes more than a decade. Deeply communal, elephants cannot survive without relationships, so the consistency of keepers is imperative. As with human children, the men and women who work at Sheldrick teach these elephants how to be independent. More than 200 orphaned elephants have been successfully reintroduced into the wild.

The relationship between the ex-orphans and their human friends does not end when the adolescent elephant joins the wild herd. They come back and visit, eager to see the newest orphans and visit the humans. On October 15, 2015, one ex-orphan, Wendi, gave birth to her first calf, whom Wendi brought to meet her human friends at the Sheldrick camp. I pray one day Kamok will experience similar happiness, but she needs our help. We are all interconnected—humans and elephants alike.